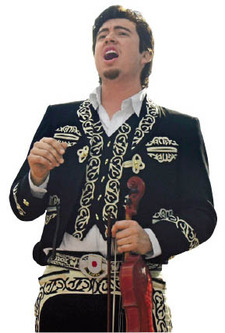 Nineteen mariachis walk into a Kyoto karaoke bar. The bartender says to the Buddhist priest, “You see, right on time.”

This is how, through my strange luck, I became a punch line in an unlikely scenario of Mexican music, Japanese cherry blossoms and Stanford networking. During my senior spring break, two tangents of my Stanford experience collided in a way that I still can’t quite believe. Then again, my Great-uncle Elliot used to quote the Roman philosopher Seneca, saying that “Luck is when preparation meets opportunity.” So perhaps I should describe my preparation.

VIDEO: Mariachi Cardenal performs a mariachi rendition of the Japanese classic "Kawa No Nagare No You Ni" ("Like the River Flows") in Tokyo during their 2009 Japan Tour.

When I was little, my father loudly sang mariachi songs in the shower, and because his voice left something to be desired, I was no fan of the music. However, when I was applying for college, I received a pamphlet with a picture of the student group El Mariachi Cardenal de Stanford in their impressive trajes de charro—those cool black suits. I remember saying to Dad, “How fancy of a place can it be if they have a mariachi?” At Orientation, when I heard the Mariachi Cardenal play its signature “El Cascabel” with two trumpeters battling it out from ramparts in front of Mem Aud, my path was set. I borrowed one of my dad’s guitarróns (the huge mariachi acoustic bass), and embarked on four college years of gigs and general fun.

My interest in Japan sprang from an art history class with Melinda Takeuchi. It was a random choice that fulfilled a GER, and I knew next to nothing about the subject—the sweeping history of Japanese painting and wood block prints. Professor Takeuchi’s excitement was contagious. She inspired a desire in me to speak Japanese (and the belief that I could learn it, even though my major was product design in the mechanical engineering department.) So, I arranged my schedule to fit in two years of Japanese and then applied for study abroad.

The spring quarter of my junior year in Kyoto was a bad time to be away from the Mariachi Cardenal. The group had begun to achieve some small fame, and there came an astonishing invitation to perform with Mariachi Los Camperos for a Mother’s Day gig in San Bernardino. In the world of mariachi, it was like being asked to open for the Rolling Stones. I seemed to be missing the most significant concert of my Stanford career.

However, in Japan, events were leading to another groundbreaking performance. One week a professor in Kyoto excused herself from her class early so she could catch a colleague’s lecture on a Japanese artist. I figured Professor Takeuchi’s training qualified me to tag along. When the museum closed, a group of professors asked me along for dinner: Mexican food. Eating Mexican food in Japan sounded like a terrible idea, but the owner of the restaurant—besides selling us the most expensive bowl of guacamole I’ve encountered—spoke Spanish, and he laughed when he learned I was a mariachi. He introduced me to Kunio Mishina, a legendary guitar player who founded the first mariachi group in Japan, El Mariachi Japonés of Kyoto. We played together, in a studio surrounded by certificates from Guadalajara. When we parted that day, Mishina mentioned that there were actually two mariachi groups in Japan. I remember thinking, “Well, one out of two ain’t bad.”

That summer I began a Stanford-sponsored internship with Japan Rail East in Tokyo. As luck would have it, a friend from Kyoto came to visit—and surprised me by taking me out to dinner at, of course, a Mexican restaurant. While I was wondering why everyone in Japan was so eager to have me critique their Mexican food (I once found mushrooms in the tacos!), the owner of the restaurant walked out in a mariachi suit. Sam Moreno sings in his restaurant every night, playing songs my grandparents would have recognized. I learned that he was lead singer of Mariachi Samurai de Tokyo. We sang duets for the second half of his show and parted friends. Out of the dozens of “Mexican” restaurants in Japan, I ended up at two that led me to the nation’s only two Japanese mariachi.

Back at Stanford that fall, Marachi Cardenal discussed the possibility of a spring-break tour. I joked that we should go to Japan and jam with the Japanese mariachi. Then I thought seriously about it. I made a double bet with myself: I would not only take the Mariachi Cardenal to Japan, but I would also learn to play violin for the concerts there. I spent two quarters working out the trip, which was made possible in great part by the generosity of Helen Bing, whom I’d met during a Bing Overseas Study dinner in Kyoto.

I don’t know about my three-month-old violin skills, but in March Stanford provided two trumpets, two flutes, two harps, three guitars, three vihuelas, six violins and a guitarrón for a joint concert with Mariachi Samurai de Tokyo. Vince Ricci, ’94, who caught this show, invited us to join alumni from six California universities at a cherry-blossom viewing later that week. There we did an impromptu concert that gathered about 250 people in a beautiful public park. Days later, we hopped a bullet train and joined Mariachi Japonés to perform at the Kyoto International Community House.

A music lover at this concert invited us to the karaoke bar he owns. A patron at the bar asked how the trip was pulled together. I explained the scattered events that led to it. I spoke, in wine-influenced Japanese, about how my studies of Taoism and Buddhism, from high school on, had cultivated an open-to-anything attitude—a perspective also strongly emphasized by my product design professors. I’d just finished describing four days at the Monterey Sophomore College program, where I helped monks dig holes for solar panels at the Tassajara Zen Mountain Center. The patron, Hino Jungo, smiled at the mention of Tassajara. He then revealed that he was a Buddhist monk in an unbroken 75-generation line of Buddhist monks and head of faculty research at Otani University, just across the street from the bar. I felt like I had been explaining gravity to a particle physicist.

Jungo invited us to tour his college the next day, and lunch ended in another performance, in the equivalent of Mem Aud. How’d we land this gig? some freshmen asked me. My answer was simply the advice I’d give any future Stanford student: Don’t worry about the outcome, it will find you. You never know what shape your “luck” will take if you trust it.

After the Japan Disaster

After the Japan Disaster