For Joe Tom and Holly Wood and all seven of their children, there was no escaping a Farm education. 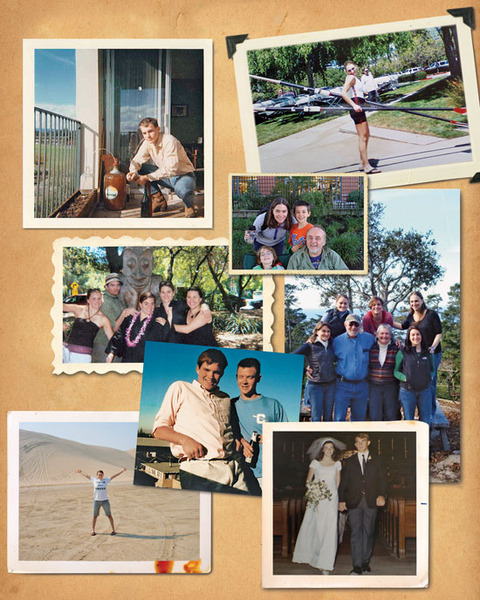 Holly Wood, the mother of seven children, remembers when the youngest, her daughter Kelly, called to say that she had received an acceptance letter to Stanford. “I told her to shake the envelope.”

When Kelly did the Wacky Walk in June, she joined six siblings and her parents as Stanford grads. As near as anyone can tell, the nuclear family of Joe Tom and Holly Wood has the most Farm hands ever.

Nine alumni. More than a certain juice has vegetables. More than the number of planets in the solar system (since Pluto was demoted). As many inches as Trent Reznor’s nails.

Joe Tom, an engineering student from Dallas, first saw the campus on a visit during high school, a trip in which he also saw the Willies Mays and McCovey hit back-to-back homers at Candlestick Park. His student activities included “coffee, cigarettes, beer, playing bridge and hearts [and] watching radicals burn the American flag,” and there’s a fond memory of receiving his first “A,” in Plain Concrete.

Holly, who followed her sister, Florence Rust Wetzel, ’64, to Stanford, remembers walking into Branner and hearing their father, Edward B. Rust, ’40, say it looked just like when he was there in 1936. A physical therapy major from Bloomington, Ill., she worked on the Daily and was active in the Social Regs Committee, which sought changes in policy that restricted hours for women students.

They married in MemChu at the end of their junior year. Their children, an eldest son and six daughters, were born to the Colorado couple in 1969, ’71, ’74, ’76, ’79, ’83 and ’85. The first thing their son, Joe Geoff, remembers about the “mythic and majestic” place where his parents went to college is the “red-colored logo that decorated many of the bibs, T-shirts and other accessories of youth.”

‘The smell of eucalyptus always takes me to a happy place.’
—Erin Wood

Joe Tom has been an engineer for 40 years and has a water-resource consulting business in Golden, Colo., where “very sharp” young colleagues “won’t let me retire.” Holly, the manager of development outreach with the KIPP Foundation in San Francisco, is “passionate about education, reading, sports (especially Stanford’s) and learning something new every day.”

The recent Wood Age in Stanford history dates from 1987, the year of Geoff’s matriculation. Here’s a rundown on each offshoot.

A Branner freshman, Joe Geoffrey Wood’s best campus memory is moving back into the Theta Xi house after the 1989 Loma Prieta earthquake. (The first afterparty? “Good music, good friends, good to be home.”) He studied in Berlin, arriving less than two months after the Wall came down. Stanford had the Axe all four years he was an undergrad.

He earned master’s and JD degrees from Vermont Law School and volunteers with nonprofit organizations in Sacramento and writes.

Heather Hollis Wood Morrell first remembers Stanford from a visit when she was “14 or so. We ate fro yo at Tresidder, and a bird pooped on my mother’s head.” Heather lived in Alondra as a freshman, and rejoiced at finding physical anthropology as a junior. (“I had tried a lot of different subjects by that point.”) She stopped out to teach English in Japan for a year.

She lives in Eugene, Ore., with her husband, Stephen, and their children, Dana, 10, and Shanti, 7.

Margaret Hollis “Molly” Wood met one of her best friends in the bathroom at Arroyo—“she still thinks I am really weird for introducing myself in the bathroom.” A Cardinal diver, she loved hanging out at the Dish and Lake Lag, and still being in grad school when two of her sisters were undergraduates.

She founded KIPP Bayview Academy, a college-prep charter school in San Francisco, in 2003. In June she stepped down as principal of the school, although she intends to stay in education. She and Dagny Maidman will celebrate their fifth anniversary in July.

Long before she moved into Alondra as a freshman, Julia Erin Wood helped at Stanford phone-a-thons and attended Big Game parties in Colorado. A four-year rower with the women’s crew, she remembers the team all learning to crochet—a nice contrast from their erging and weight training. El Niño, during her senior year, made Lake Lag full enough to row on.

She has master’s degrees in history and in African-American studies from Yale, where she is pursuing a PhD.

What made a first favorable impression on Cedro freshman Megan Harriet Wood was that Stanford had a dorm called the Enchanted Broccoli Forest, where she eventually would dwell. Her favorite memory of Stanford was hearing her daughter, Kaliah, then 4, yell, “Yay, Mom!” at the CASA graduation.

She lives in the Bay Area and is applying to a midwifery program in Seattle.

A Larkin freshman who became a Synergy RA, Shannon Kathleen Wood’s first Stanford impression was the long drive to Geoff’s graduation—and staying in the family camper by his frat house. As a student, she loved “finding little nooks outside to read,” picnics in Frost Amphitheater, geology field trips, but her fondest memory is picking up her “teeny tiny” niece, Kaliah, from day care and “getting to be a part of her life from such a young age.”

Shannon, who was in the inaugural class of Stanford@SEA in Spring 2003, graduated in June from Lewis & Clark Law School, where she focused on civil rights and environmental law.

If she felt homesick as a Branner freshman, Kelly Rust Wood walked across campus to sister Shannon’s room for a sleepover. Kelly studied in Qatar and stopped out for a year, post-Katrina, to work with Habitat for Humanity in New Orleans. She’s working this summer in Indonesia with Engineers for a Sustainable World. She’ll return in the fall to complete a master’s in construction engineering management.