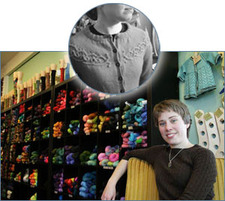 Count Emily Williams among the fortunate few who have turned a hobby into a career.

In 2006, Williams was in an emotionally grueling job at the U.S. Department of Veterans Affairs in Portland, Ore., working with veterans suffering from mental illness and hepatitis C. To unwind, she joined a knitting circle of fellow VA employees. She and another member began talking about their shared passion for knitting and frustration with their current jobs.

“There’s nothing like working for the federal government to inspire you to be your own boss,” Williams said. What if, they wondered, they made their hobby their career? That’s how Twisted, a hip Portland yarn shop, was born.

After months of planning, Williams and business partner Shannon Squire opened Twisted’s doors to the public. It was June 29, 2007—Williams’s 27th birthday.

Williams’s passion for knitting was sparked during her days at Stanford in Oxford. The cash-strapped junior asked her roommate to give her a haircut. The resulting crop was “horrible,” Williams recalls. (Fortunately, the two are still friends.) When Williams passed by a yarn shop in a small English village she thought her hair problem was solved: she’d knit herself a hat.

For help with her new hobby, Williams turned to Pat McAvoy, the beloved receptionist at Oxford’s Stanford House. McAvoy gave her some pointers, and a few weeks later Williams proudly donned her first knitted creation, a baby-blue stocking cap.

After two years, Twisted has surpassed its owners’ sales projections, despite the down economy. Williams believes that may be partly due to people replacing expensive forms of entertainment with hobbies.

Williams’s mentor, McAvoy—now retired from the Stanford House—is thrilled with her charge’s success. “I am delighted and . . . proud that Emily has made such a success of her shop.”

Corinne Purtill is class of '02.