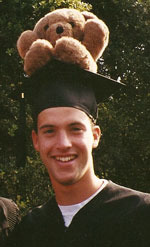 Frisbee golf at Stanford is the greatest sport in the history of mankind. Not only does it require skill, focus and endurance, but it fosters camaraderie similar to the bond formed between soldiers in a Spielberg HBO miniseries.

During my sophomore year, a game could be summoned by any of the six regular players in Twain by taking a disc and throwing it down the hall so that, ideally, it hit the door frame and ricocheted inside another player’s room, breaking something in the process.

The goal in Frisbee golf is to complete 18 “holes” with the lowest number of throws possible. In a standard game, the holes are mesh baskets attached to metal poles. At Stanford, the holes take on more interesting forms—a lamppost near the post office, a flier kiosk near Cubberley Auditorium and, of course, the center Rosetta in the Quad.

What a person must remember when playing is that no matter how good he may be, the Frisbee gods will even the scales by launching his disc into a moat or off a cliff . . . or into the L3-L4 vertebrae of his resident fellow.

It really wasn’t my fault. Professor F. was engaged in conversation directly in front of the fourth hole at 4:12 on a Thursday afternoon. My lie was 150 yards in front of the corner arch of the Quad, across from the clock tower—I could definitely make par. In accordance with Frisbee golf etiquette, I walked up to the professor, busted into his conversation and explained that he was blocking the hole. True, I didn’t exactly ask if he would be willing to step aside, but no one can say I didn’t provide am-ple warning. He didn’t budge.

I walked back to my disc and sized up the shot. Instead of risking injury to my human obstacle, I decided to throw the Frisbee well to the right of him and angle the disc so that it would curve around and land in front of the arch, giving me an easy throw for bogey.

Unfortunately, my new, specialized Frisbee had the forgiveness of a circular saw blade. As it left my hands, a gust of wind lifted it 50 feet into the air. It sliced upward in an arc and stalled for a moment, like the end of a giant pendulum. The disc then seemed to break all rules of Newtonian physics and came rocketing down out of the sky, making a beeline right for the small of Professor F.’s back.

I watched in silent horror—it happened too fast to warn him. There was an audible thud as the disc made contact; Professor F. crumpled to his knees in obvious pain. My friend Keith covered his mouth to suppress a laugh and dove into some nearby bushes.

The good news is that Professor F. eventually stood up, said he was okay, and limped away. He didn’t talk to me for the rest of the year, but at least I didn’t have any classes with him. The point is that people who live in glass houses should never play Frisbee golf.

Danny Rudermanp is an independent college counselor and writer in Los Angeles.