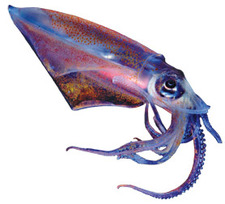 Bill Gilly, professor of biology at Hopkins Marine Station, compares dissecting the Humboldt squid, a carnivorous species that can grow to seven feet long and top 100 pounds, to poking around in a Model T. “They are big, charismatic, captivating creatures with all these massive parts right there for inspection.”

Through his nascent Squids4Kids program, a collaboration with the NOAA National Marine Fisheries Service in Santa Cruz, Gilly, below, wants to give high schoolers across the country a chance to look under the hood of these menacing mollusks. The catch? He’s asking educators to try out teaching kits he and his graduate students developed to guide students as they slice up the squid. So far, Gilly’s research team has provided about a dozen specimens to school classrooms and other educational programs.

Rob Yeomans, a sea captain and marine biology teacher at Newburyport High School in Massachusetts, served as one of Gilly’s maiden volunteers—and his first on the East Coast. Yeomans emailed Gilly in December and requested a squid. A few months later, a dumbfounded FedEx carrier arrived with a specimen. “I sat back and let my students do it all,” says Yeomans of the dissection. “They loved being up to their elbows in the stuff.” He has another of Gilly’s Humboldts stored in his home freezer and plans to order two more.

One day last spring, Gilly visited a group of Bay Area seventh graders as they examined one of his specimens. In the hall, he encountered a wave of girls in school uniforms leaping and chanting, “Squid! Squid! Squid!” “Kids have a visceral excitement for these creatures,” he says. “Dissecting one is unlike any other experience.”

TED BOSCIA, MA ’07, is a writer at Cornell University.