For Stanford Softball, It's Turnaround Time

New coach Jessica Allister, a former Cardinal standout, aims to reprise the success she had at Minnesota. 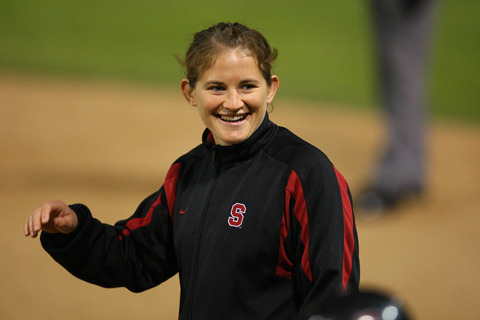 Jessica Allister knows as well as anyone how good Stanford softball can be. A four-year starter who played in a school-record 266 games, Allister was instrumental in guiding the Cardinal to its only College World Series appearances, in 2001 and 2004.

It’s her job now to work toward a third trip. In July, Allister was named the fourth coach in Stanford softball history, taking over for Rachel Hanson, who resigned after a frustrating three-year run.

“This is the person they needed to hire,” says Ramona Shelburne, ’01, MA ’01, a former outfielder who is now senior writer for ESPN. “This is not just a home run. This is a grand slam.”

Shelburne isn’t exactly a neutral observer. She and Allister, ’04, were teammates Shelburne’s senior year, when she says the poised freshman catcher helped push the team over the hump and into the World Series.

But Shelburne says her excitement about Allister—which was echoed on long chains of text messages among former players—isn’t about the former second-team All-American’s glory days on the field. It’s about her coaching chops. Over seven years, Allister transformed the University of Minnesota—a traditional minnow that had a 16–37 record the year before she arrived—into a big fish that last year went 56–5 and earned its first-ever No. 1 ranking.

Allister’s love for Stanford made taking the job an easy choice. “To be able to come back and lead my alma mater is a dream come true,” she says. “Stanford has always been home.”

She returns to a very different program than the one she knew as a player and, from 2007 to 2009, as an assistant coach. After longtime coach John Rittman resigned in 2014 following complaints by a cadre of players, a divided program — which had just missed the NCAA tournament for the first time in 16 years — hit free fall. Over the past three seasons, the team has notched just four Pac-12 wins.

It’s a challenge Shelburne says her old teammate is right for. “Stanford just hired the best young softball coach in the world,” she says. “She is the right person to build this back up.”