Stanford's new campus is its first major expansion away from 'home.' 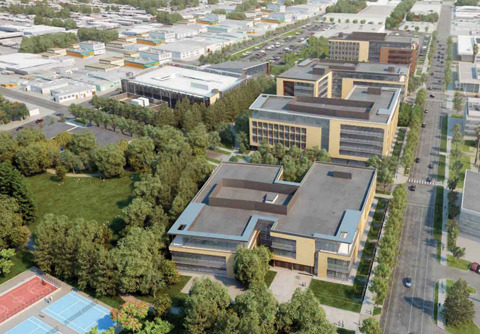 With 8,180 acres, much of it open land, Stanford can hardly be called cramped. But with growing faculty, increasing enrollment, and land use constraints, even the Farm faces a space crunch.

Which explains why the university is revving up for its first major expansion beyond its traditional home. This year, plans call for construction to begin on Stanford Redwood City, a 35-acre former office park six miles north of the main campus that the university purchased more than a decade ago.

At a cost of around $570 million, the first phase of the project stands to be the most expensive construction project in Stanford history. The checklist includes 570,000 square feet of new office space; a sustainable energy plant; childcare and fitness centers; and a town square envisioned as the hub of a vibrant administrative campus.

And while there’s no duplicating the glory of, say, the Quad, planners say that Stanford Redwood City will share the main campus’s DNA. The buildings, as an example, will use the French limestone that’s become the hallmark of modern Stanford, while terracotta trappings will recall the university’s historic core.

The results would look at home next to marquee modern features of the university like the Science and Engineering Quad. “We want this to feel like Stanford,” university architect David Lenox told the Redwood City planning commission before receiving its unanimous approval in October. “This was very conscious, that this not become a business park or an office park. It is a campus.” 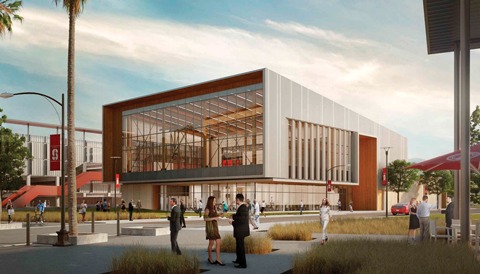 At press time, the project still required final approval from Redwood City’s city council. Current estimates call for Phase I to be completed in 2019, whereupon around 2,400 employees will relocate from the offices of Business Affairs, Medicine, Development, Human Resources and Land, Buildings and Real Estate, among others.

The new site will not play a major role in student life. No classes are planned for the new site, and staff needing daily contact with students or faculty were not considered for the move. Over time, the Redwood City campus may encompass 13 buildings on the site, as needs warrant.