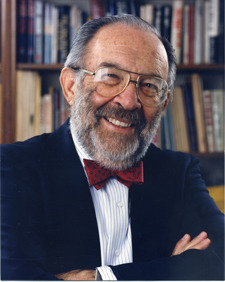 Stanley Sheinbaum, a peace activist and founding publisher of New Perspectives Quarterly, was an economist by training who ran twice for Congress in the 1960s on an antiwar platform. He had a ceaseless interest in human affairs as well as a genius for bringing people together to make things happen in the world.

An influential fund-raiser, he threw his energy into progressive causes, including the ACLU and Americans for Peace Now. He raised money for Daniel Ellsberg’s legal defense after the Pentagon Papers appeared in 1971; as a University of California regent from 1977 to 1989, he helped divest the university of its South African holdings; and as president of the L.A. Police Commission, he led the ouster of Chief Daryl Gates after the Rodney King beating in 1991.

Born in the Bronx, N.Y., Sheinbaum was rejected by 33 colleges on returning from World War II; after a stint at Oklahoma A&M, he transferred to Stanford and graduated with honors. While working on his doctorate in economics, he taught at Michigan State U. and accepted a job running its Vietnam Project. On a mission to Saigon, he grew disillusioned with the CIA’s infiltration of the program, which he and journalist Robert Scheer exposed in Ramparts magazine after they made a daring visit to Cambodia to disprove the existence of the Ho Chi Minh Trail.

Sheinbaum’s second wife, Betty, daughter of movie mogul Harry Warner, shared his enthusiasm for radical politics. Their home became a venue for a mix of leftists, movie-industry heavyweights and even royalty, and they hosted fund-raisers for politicians such as Eugene McCarthy and Bill Clinton.

Nicholas Papandreou, whose father, Andreas, a Greek economist and politician, was one of Sheinbaum’s close friends, remembers his kindness—and the pinball machine he sent him from America when Papandreou’s family was exiled in France. The Greek junta had jailed Andreas in 1967, framing him on false charges; Sheinbaum mounted an international campaign that shamed the colonels into releasing him, paving the way for the restoration of democracy in Greece.

In 1982, Sheinbaum jumped on a plane to Athens to upbraid Andreas Papandreou, by now prime minister, for offering diplomatic succor to the Palestinian Liberation Organization, which was considered a pariah by the West. This led to Sheinbaum’s meeting with its leader, Yasser Arafat, and to the process that culminated in Arafat’s renouncing violence and recognizing the state of Israel.

This triumph was short-lived, but it did not stop Sheinbaum’s dogged efforts to promote dialogue in the Middle East. As he stated in an article the year after visiting President Hafez al Assad of Syria in 1995, “I’m not running a government, I have nothing personal to gain, but I do have a feeling of what should be done.”

In addition to his wife, Sheinbaum is survived by his stepchildren, Karen Sperling, Matthew Sperling and Cass Warner; eight grandchildren; and 12 great-grandchildren.

A sophomore seminar gives students an intimate view of the people and places surrounding the Battle of Little Bighorn.