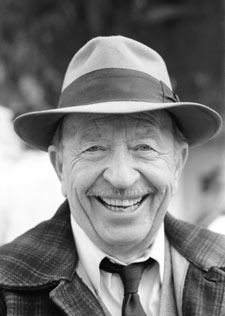 Frank Randolph Cady claimed that his lack of hair helped him land attractive roles in movies and TV, including the one for which he is best remembered: that of Hooterville general store owner Sam Drucker on the 1960s sitcoms Petticoat Junction and Green Acres. "I was always intensely interested in theater but at 24 my head was as shiny as a cueball on a billiard table," he told the Toledo Blade in 1959. "Actually I found it helped. When I was too young to play real character parts they mistook me for older because of the bald noggin. I got juicy roles right from the start."

Born in Susanville, Calif., Cady studied speech and drama at Stanford, where he was a member of the Delta Tau Delta fraternity and wrote for the Chaparral humor magazine. At Stanford he met two major influences on his life: the theater and his future wife, Shirley Jones, '38. They married in 1940.

After graduating, Cady worked as a radio announcer and news broadcaster in San Francisco, then served in the Army as a public relations specialist in Europe. After the war, he moved to Los Angeles, where an agent saw him in a local play.

He began acting on TV and in film in the late 1940s and his career continued for several decades. "His boom times were in the early to mid '60s through 1971 when he was doing the Paul Henning shows: Petticoat Junction, Green Acres and Beverly Hillbillies," says his daughter, Catherine Turk. He reprised the Drucker role in the Return to Green Acres TV movie in 1990.

Cady also played Doc Williams in The Adventures of Ozzie and Harriet, had a small part in Alfred Hitchcock's Rear Window and worked with actors including Jeff Bridges and Gene Hackman.

He was a member of an entertainment industry group known as the "Hollywood Hackers" who played golf tournaments to raise money for charitable causes. Cady loved to golf and continued to play until the age of 94. After retiring, he moved north with his wife and eventually settled in a golfing community in Wilsonville, Ore., to be closer to their daughter.

Cady's wife of 68 years died in 2008. He is survived by his children, Catherine Turk and Steven; three grandchildren; and three great grandchildren.

Joey Jachowski, '14, is a Stanford intern.

Time to Cash Out?

Bills and coins have gotten cumbersome. Their critics say digital money will make everything from buying a latte to climbing out of poverty easier.