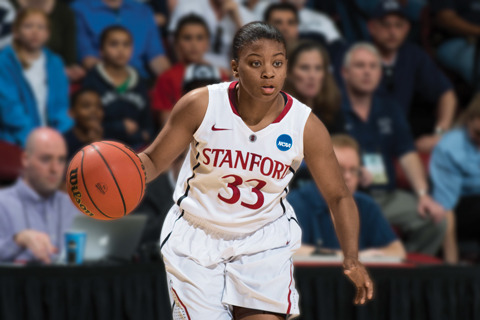 Losing in the final four is different. It's not just a season-ender. It's a special opportunity lost, especially if the game feels squandered.

"Our team is, I think, really disappointed with how we played, especially in the second half," said coach Tara VanDerveer, after Stanford was derailed by University of Connecticut, 75-56, in the NCAA women's semifinals.

The Cardinal, making its 12th Final Four appearance in school history, gave top-ranked Connecticut enough headaches in the first half to have the TV announcers speculating about a brewing upset. But the second half was all Huskies, whose imposing size and defense were decisive.

For Stanford fans, and arguably for many hoops devotees around the country, the game's emotional essence resided with Cardinal superstar Chiney Ogwumike, whose college career came to an end. Like her big sister Nneka, '12, with whom she played for her first two seasons, Chiney leaves Stanford with a stellar array of memorable achievements but not the most desirable one—a national title.

"I think it's been an amazing run," she said at the postgame press conference. "I'm not even that emotional about it, because I was just trying to have fun today—just have fun, enjoy the moment, play hard."

Ogwumike was held to 15 points; junior guard Amber Orrange led Stanford with 16. But, as VanDerveer had been saying, the Cardinal's fortunes couldn't depend on a formula of "Chiney and the Chinettes." Stanford's full complement of talent had to make itself felt, as it had in the Elite Eight game that propelled the team to Nashville for the Final Four.

Playing at Maples Pavilion, the Cardinal had to mount a furious rally to overcome North Carolina 74-65 in the regional final. Ogwumike put in 20 points after a slow start, but her teammates all made their marks in clutch moments. Mikaela Ruef, '13, who was named the regional's most valuable player, dropped in 17 points and showed an uncharacteristic three-point touch, hitting three of five from that range. Meanwhile, three more players scored in double figures: Orrange (14), Bonnie Samuelson, '15 (13) and Lili Thompson, '17 (10). Overall, Stanford sank 9 of 20 from three-point territory.

"My experience at Stanford has been a blessing," said Ogwumike, reflecting on her undergraduate career. "I've met so many great people. I've been pushed. Days like these will make me a better player and person. . . . I'm just fortunate to be able to have Stanford on the front of my jersey this one last time."

1. Always On Her Game: Chiney Ogwumike

2. How Sweet It Is: What does the men’s basketball team success mean?

The Man Who Got Them In