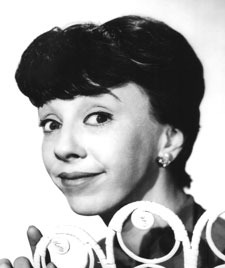 Ann Morgan Guilbert, an actress best known for portraying the chatty next-door neighbor Millie Helper on The Dick Van Dyke Show and Fran Drescher’s colorful grandma Yetta on the 1990s sitcom The Nanny, delighted both television and movie audiences throughout her career. Yet starting with her appearance as Topsy in a campus production of Uncle Tom’s Cabin her freshman year at Stanford, Guilbert’s first love was the stage.

Intending to study nursing at Stanford, Guilbert received a D grade in a chemistry class freshman year—the same year she saw a notice for auditions for Uncle Tom’s Cabin. She made her stage debut and promptly switched her major to speech and drama. Guilbert and her first husband, George Eckstein, ’49, moved to Los Angeles so he could attend law school. There, Guilbert appeared in a musical variety cabaret act, The Billy Barnes Revue, that toured throughout California before opening in New York in 1959. Eckstein became a producer and actor, and, in the early ’60s, Guilbert auditioned for and was cast in The Dick Van Dyke Show, which also starred Mary Tyler Moore.

Guilbert and Eckstein divorced in 1966, and she married actor Guy Raymond in 1969. While Guilbert continued her career in television, appearing in movies and episodes of Dragnet, Room 222, Seinfeld and Curb Your Enthusiasm, she also became active in regional theater, which was her true passion, according to her daughter Nora Eckstein.

Nora recalled, “Theater was always my mother’s first love, despite her success on television, and regional theater was her second act. She had long residences at the Cleveland Playhouse, the Denver Center Theater and the Pacific Conservatory of the Performing Arts in Santa Maria, Calif., where she formed many friendships. My mother was always extremely proud of and grateful for her time at Stanford. She often told the story of how she and her four roommates purchased a car together for $25 each their senior year—it was an extremely old used car that may well have started up with a crank—and once they graduated, they pushed the car into the Quad and left it there with the keys inside. Their idea of a senior prank.”

Guilbert’s theater credits include roles in productions of The Matchmaker, Arsenic and Old Lace, Waiting for Godot and To Kill a Mockingbird. In 2005, she appeared on Broadway in A Naked Girl on the Appian Way, starring Jill Clayburgh and Richard Thomas. She continued to work in television and film into her 80s, appearing in Nicole Holofcener’s 2010 movie, Please Give, a Sundance Film Festival selection, and the HBO series Getting On. Most recently, Guilbert appeared in the CBS comedy Life in Pieces.

Guy Raymond died in 1997. In addition to Nora, Guilbert is survived by her daughter Hallie Todd and two granddaughters.

To Be a Bracero: Seeing Beyond Abuses

In a League of Her Own