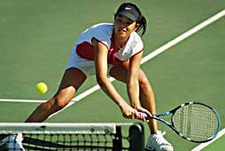 On their home courts and on the road, the Cardinal women had a literally perfect year—29-0. When they wrapped the season by defeating UCLA 4-1 on May 23 for the national title on the steamy University of Georgia courts, the victory had an especially sweet savor after last year’s bitter 4-3 loss to Florida. “Just tasting defeat and seeing how much fun it is not gave us a lot of incentive to do whatever was necessary to win this year,” Barnikow says. “All year it was, ‘Practice like we’re playing Florida.’”

The top-ranked tandem of Barnikow and Burdette clinched the team doubles point in the NCAA finals. “We were on a high coming off the doubles,” says Forood, ’78, who has brought home three national titles in her four years as head coach. “It was nice to be up 1-0 going into the locker room.” When Burdette won the final singles match, the team rushed the court as 2002 graduates Gabriela Lastra, Lauren Kalvaria and Keiko Tokuda celebrated in the stands.

Then, it was Liu’s turn to defend her individual title. From May 24 through May 28, she dispatched one opponent per day, each time in straight sets. In the May 29 finals, however, the No. 7 Liu skidded in the second set against No. 3 Jelena Pandzic of Fresno State. She battled back in the third to win the match, 6-4, 0-6, 6-3. “I thought to myself that it was the last set of the year, the last push, and I came out with a lot of energy, moving my feet really well and using my legs on my serve,” Liu says.

After Liu won the title last year as a freshman, there was speculation that she would not return to Stanford. She did play on the pro tour in the fall—while carrying a full course load—then returned to practice with the team during winter and spring. (After this summer, however, she may remain on the tour, completing college at a later date.)

“The tour’s a really different lifestyle, and that’s a big factor in why I came back to school this year—to solidify friendships and to be able to play on a winning national championship team,” Liu says. “You’re playing not just for yourself, but for the rest of your team.”

Former Assistant Gets the Nod

After 38 Years, Gould Retires. Sort of.