As the discipline evolves, scholars shift between theory and practice. 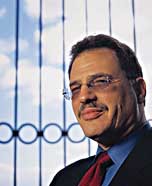 Hoover senior fellow Larry Diamond had four telephone messages waiting from national security adviser Condoleezza Rice when he returned from a business trip last fall. He was pretty sure he knew why his former colleague in the department of political science was calling.

Indeed, Rice asked Diamond, ’74, MA ’78, PhD ’80, a specialist in democratic development, to go to Baghdad as a senior adviser to the Coalition Provisional Authority. “I decided almost instantly,” Diamond recalls. “I’ve always been a strong advocate of academics contributing their expertise on the ground.”

Diamond is a professor, by courtesy, of political science who has advised burgeoning democracies in Ghana, Kenya, Korea, Taiwan, Nepal, Nigeria, Thailand and Turkey. In the several months he spent in Iraq, he consulted with civic, student and women’s groups, and with religious mullahs, telling audiences that “Iraq now has the opportunity to do what no other Arab country in our time has yet done: establish a genuine democracy.” By the time he left in early April, he had helped write the Iraqi interim constitution. One of its provisions guarantees that women will hold 25 percent of seats in a transitional parliament.

In another crisis-plagued part of the globe, Terry Karl has been working with local investigators in Chad. In that oil-rich but wretchedly poor West African nation, the political science professor has shown people living along ExxonMobil’s 600-mile pipeline how to document rising rates of infant leukemia, polluted water sources and the loss of revenue-producing mango trees—all evidence, she says, of the devastation that can result from resource exploitation.

Like Diamond, Karl, ’70, MA ’76, PhD ’82, is a specialist in comparative politics. She speaks five languages, and her work on oil-exporting nations takes her to Africa, the Caspian Sea region and Latin America. She also collects evidence against human-rights violators and studies how countries transition from authoritarian rule to democracy.

The mileage that Diamond and Karl have accumulated this year is one measure of what political scientists—who sometimes are accused of ivory-tower diffidence—can bring to an increasingly complex and volatile world. Their boots-on-the-ground contributions also point to a widening methodological divide in their field between those who value case studies and those who think countries can best be understood through statistical models. Moreover, faculty interviewed by Stanford say the boundaries increasingly are blurring between the four traditional subfields of their discipline: international relations, American politics, comparative politics and political theory.

“One of the reasons that it’s a fun time is that it’s a really intellectually messy time,” says department chair Paul Sniderman, a specialist in American politics who has done research in Italy, France and the Netherlands. “When you can’t predict the subject matter of the papers your colleagues are going to show you, it’s a good time.”

Some faculty describe the political science department as a doughnut: no single methodological core, and faculty spread all around campus. Six professors have joint appointments at the Hoover Institution, two at the Institute for International Studies, one at the Graduate School of Business and three in other departments within the School of Humanities and Sciences.

Michael McFaul is a comparativist and Hoover fellow who worked at the Carnegie Endowment for International Peace in Washington, D.C., for three years. He returns to the nation’s capital every six weeks or so, to testify before congressional committees and meet with administration officials. In recent years, he says, he has noticed a growing divide between policy making and the academic discipline of political science, as well as declining student interest in government service. “There aren’t many professors in the Bush administration right now, and
that, to me, is a concern,” says McFaul, ’86, MA ’86. When State Department recruiters come to Stanford, he adds, they find it a hard sell. “A lot more students are going off to work for [nongovernmental organizations] if they’re looking for a first job, rather than working for the State Department or the CIA.”

Students who major in political science often have a history of interest in social issues and volunteering, and they are typically good at math, their faculty mentors say. Many undergraduates are pre-law candidates who think an understanding of government and the Constitution will help them in their graduate study. Others want to know how to think about nuclear proliferation, or understand how Japan became an economic juggernaut in the 1980s.

“Our students want a field that allows them to be able to say something about contemporary problems of the world,” says Judith Goldstein, a specialist in international relations who serves as Humanities and Sciences’ cognizant dean for undergraduate and graduate studies. “Political science has deep theoretical traditions, but a lot of our classes are applied, and you can talk about real things.”

Even in political theory, the subfield that has always seemed a bit apart from the other three, there’s a practical orientation these days. “One of the suspicions a lot of scholars and students have about political theory is that you read a political theorist like Plato or Aristotle, and you’re supposed to get a blueprint of how society ought to be organized,” says assistant professor Robert Reich. Reich, MA ’98, PhD ’98, teaches Children’s Citizenship: Justice Across Generations, and Ethics and Politics of Public Service, an introductory course for students who are doing local volunteer work. “My own approach is to start with the real world and illuminate the boundaries of what’s morally permissible in public policy.”

He Helped Square Your Shoulders'

Cub Love Is in Fashion