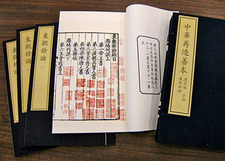 A 9,000-volume collection of painstakingly reproduced Chinese books—ancient volumes of philosophy, literature and Confucian canon—has been added to Stanford's East Asia Library and will be available to visitors this fall.

The oldest material dates back 1,300 years, and library director Dongfang Shao says scholars probably have never seen some of the books. The Chinese government assembled the collection, Reproductions of Chinese Rare Editions Series, from museums and archives throughout the country. Purchased by Stanford at what library officials said was an opportune price, the precise reproductions invite important discoveries.

Until now, noted Albert Dien, professor of Chinese, emeritus, "The scattered nature of the holdings and degree of access to early and rare woodblock editions has been, of course, a serious impediment to their availability for research."

Construction projects recently given concept and site approval by the Board of Trustees include the first undergraduate residence to be built on campus since 1992. The dorm would join Castano, Kimball and Lantana halls at the Manzanita Park complex for upperclassmen. Assuming further approvals for design and construction, the $20.5 million project would be completed in late 2012. Two projects that reached construction approval were the $4.6 million Mulberry House, the second childcare facility at the Madera Grove Children's Center, and the East Campus Dining Commons, a $20.3 million facility situated between Toyon and Crothers halls.

The School of Medicine in August undertook a trial program for iPad use by distributing the device to 91 first-year medical and master's of medicine students. Charles Prober, senior associate dean for medical education, noted growing challenges from the rapid flow of information, which the iPad's mobility and graphics might manage better.