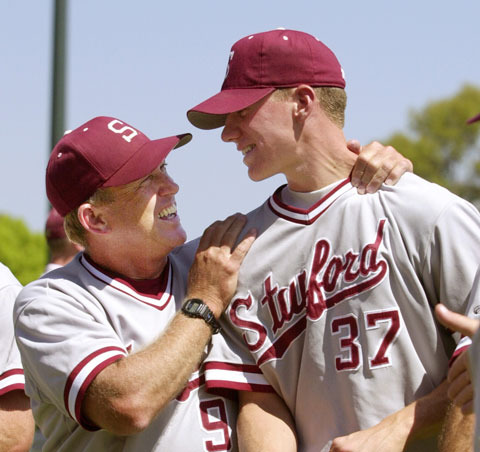 Mark Marquess will retire after next season from the baseball coach job he has held since 1977. A former All-America first baseman for the Cardinal—and a quarterback-receiver-defensive back-puntreturner on the football squad—Marquess, ’69, guided the baseball team to back-to-back NCAA championships in 1987 and ’88.

In announcing his retirement, Marquess noted that his career had been shaped by an association with “a university I deeply love,” and that he owed thanks “most importantly (to) the many parents who entrusted their sons to me and our program.”

Marquess will begin the 2017 season, his 41st as head coach, as the nation’s second-winningest active coach, with a record of 1,585-862-7. His teams have made 29 NCAA tournament appearances and reached the College World Series 14 times. “It’s time for the university to implement a succession plan for our program,” said Marquess, who has helped 60 players hone their skills well enough to not just play professionally, but reach the major leagues. Stanford points out that 52 of those athletes earned degrees. Moreover, the Marquess coaching tree—ex-players or former assistants who have become head coaches—includes Cal’s David Esquer, ’87, MA ’89 (and the starting shortstop on the 1987 title team), and San Jose State’s Dave Nakama.

Identity for Marquess is almost as closely associated with his uniform number, 9, as his name. Before becoming head coach on the Farm, he spent five seasons as an assistant to Ray Young. His life as an undergraduate included rooming in Rinconada with a later presidential candidate, Mitt Romney, and he earned his bachelor’s in political science, followed by a master’s in the same subject at San Jose State.

Marquess is a member of the American Baseball Coaches Hall of Fame, and in 1988 he won International Coach of the Year recognition after directing the U.S. team at the Seoul Olympics to the gold medal.