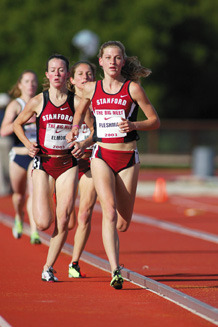 Senior Lauren Fleshman took the 5,000-meter title at the championships, which were held in June at Sacramento State. Clocking in at 15:24.06, the 14-time All-American became the second female runner in NCAA history to win three consecutive 5,000-meter titles. “When someone made a move, the plan was to keep pace and continue to be fresh for a strong finish,” she told reporters after the race. “With 300 meters to go, I said, ‘Let’s go,’ and I was hoping for a magical spark. The crowd certainly helped. There was a large contingent of Stanford fans, and they helped keep me going.”

The Cardinal fans cheered just as loudly when Alicia Craig won the 10,000-meter race in 32:40.03, breaking the school record by more than 26 seconds and earning second place in the Pac-10 record books. She became the second woman in Stanford history to win the NCAA 10,000-meter title. “This was a wonderful race,” said Craig, a redshirt freshman. “I tried to sit back in a good place and be patient. This was a solid group of runners, but I was confident that I could run with them.”

And Grant Robison staved off Arkansas’s Chris Mulvaney at the finish line to win the 1,500-meter title with a career-best 3:40.39. “With 300 meters to go, I said, ‘It’s now or never,’ ” the junior explained. “I couldn’t hear Chris down the stretch, but I could hear the crowd, so I knew the race was going to be close. Being the NCAA champion—it hasn’t hit me yet.”

In another corner of the field, Jill Camarena, ’04, finished third in the shot put—and first in the Stanford record book—with a career-best throw of 57 feet, 4 3/4 inches. The five-time All-American also reached the discus finals, where she placed ninth.

At 5-Foot-8, One of the College Game's 'Most Dangerous Players'