In the past decade, construction ) ) crews have restored earthquake-damaged buildings, created modern ) ) classrooms and labs, and made dorm rooms livable again. A look ) ) at Stanford s second stone age. 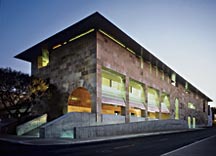 A few years ago, when Gerhard Casper was stepping down as Stanford’s ninth president, the Robert and Ruth Halperin Foundation decided to honor him with a new outdoor sculpture. Stone River, by British environmental artist Andy Goldsworthy, is a meandering drystone wall that seems to rise magically from a broad trough in the earth near the Cantor Arts Center. What really sets the piece apart, though, is its heritage. All 6,500 of its sandstone blocks were salvaged from Stanford buildings damaged or destroyed in the earthquakes of 1906 and 1989.

The symbolism hardly could have been more appropriate. Boosted by the twin engines of needed repairs and a thriving economy, construction crews during Casper’s presidency hauled more dirt, stones and steel, retrofitted more old buildings and erected more new ones than at any other time in Stanford’s history. “By the year 2001, we will have completed a five-year cycle of about double our normal level of construction activity,” Casper predicted in his 1996 State of the University address. “As measured by expenditures, even adjusted for inflation, we are in the most intense period of construction in the history of Stanford University, including its founding.” Between 1992 and 2002, the University spent approximately $1.6 billion on new and improved buildings.

Since then, as the economy has slowed, so have the backhoes and cranes. The University faces a $19 million deficit this year, and in June, Provost John Etchemendy, PhD ’82, warned the Faculty Senate that future projects in the still-ambitious capital plan—which calls for $837 million in construction over the next six years—may have to be delayed. (In its 2000 General Use Permit with Santa Clara County, Stanford agreed to limit development in the core campus to 2 million square feet over 10 years, but now it does not expect to reach that figure in that time period.) Among the “good dreams” that need additional funding: 400 units of law student housing, replacements for the outdated Hansen Experimental Physics Lab and Terman Engineering Center, a new biological sciences building, new education facilities at the Medical School, and a renovation of the old anatomy building near the Cantor Center for the department of art. As University architect David Neuman observes, “At the moment, we’re not digging any large holes.”

Although there is still work to be done, the efforts of the past decade have resulted in nothing less than a campus transformed. Ten years ago, wooden braces held up quake-damaged arches on the Quad, and many buildings were shrouded in scaffolding and cyclone fencing. The 7.1-magnitude Loma Prieta earthquake of October 1989 had damaged more than 200 Stanford buildings, 20 of which were closed immediately. After the temblor, Santa Clara County passed an ordinance requiring retrofitting of unreinforced masonry buildings. Of the 50 such structures in the county, Stanford owned 45.

Even without the scars of Loma Prieta, many campus buildings in the late 1980s were showing signs of obsolescence. Few classrooms were wired for up-to-date audiovisual technology, and many did not meet federal standards for disability access. Older student residences hadn’t been upgraded in decades, and their heating, fire safety, plumbing and electrical systems were basically shot.

Scientists and engineers on campus had their own concerns. For years they had been scattered throughout a dingy group of postwar buildings west of the Quad, known not so affectionately as Stanford’s Industrial Slum. Interaction between faculty of different disciplines—crucial for today’s scientific research—was challenging. What’s more, many of the buildings lacked basics like fume hoods, adequate power supplies and properly ventilated space for powerful computers. “We realized that we needed a modern home for the many existing researchers as well as new faculty that we hoped to recruit in the next decade,” says vice provost for undergraduate education John Bravman, ’79, MS ’81, PhD ’85, who chaired the materials science and engineering department from 1996 to 1999.

Today, these and other problems have been substantially solved. The campus sparkles with new details (granite curbs and pendant lamps along the Quad arcades), acres of fresh landscaping, dramatic contemporary buildings and lovingly restored old ones. Among the accomplishments:

• ) ) Repair and retrofitting of more than 100 seismically unsound structures. In the process, the University discovered the earthquake’s silver lining: the opportunity to revitalize some architectural treasures, including Memorial Church, the 1893 Leland Stanford Junior Museum building, Encina Hall, the west wing of Green Library and large portions of the Main Quad (see sidebar).

• ) ) Realization of a long-held dream: a Science and Engineering Quad to the west of the Main Quad. The University has also added centers for cancer treatment and clinical sciences research, the Lokey Chemistry-Biology Lab, a new mechanical engineering research facility and the just-opened Clark Center for Bioengineering and Biosciences.

• ) ) A rigorous student housing capital plan under which ) ) most residences have been upgraded and several new ) ) ones built (see sidebar).

Where to find the money ) ) for all this was not immediately clear during the recession of the early ’90s. Reserve funds for earthquake repairs stood at just $7 million, ) ) a fraction of the $300 million that would eventually ) ) be spent. The University was facing allegations that it had ) ) overcharged the U.S. government millions of dollars ) ) for the indirect costs of federally sponsored research. Subsequent ) ) congressional hearings and media reports fueled apprehension ) ) about future capital funding for medical research, engineering ) ) and the basic sciences.

In 1994, the picture suddenly brightened. The Federal Emergency Management Agency and the State of California agreed to pay $55 million toward earthquake repair and retrofitting. Another $90 million from donors began pouring into the newly established Stanford Restoration Fund. The indirect-cost controversy was settled with no government claims against Stanford for wrongdoing. And that fall, the University received the then-largest single donation in its history: $77.4 million from Silicon Valley pioneers William R. Hewlett and David Packard toward completion of the 12-acre Science and Engineering Quad.

It was as if the heavens had opened. Still, administrators were determined to be careful stewards. Casper, in particular, was painfully aware of the importance of architectural heritage. He’d grown up in bomb-ravaged postwar Germany and had seen the “mundane and uninteresting” way many European cities had been rebuilt after World War II. Conversely, after 26 years in Chicago, he knew how beautiful contemporary architecture could be, given the right degree of care. Soon after arriving at Stanford, he announced that he wanted to preside over design competitions on all major new projects. “I wanted to be sure that we were expressing what we were all about in a more contemporary vocabulary,” the president emeritus recalls during an interview in his office at the Institute for International Studies, in the newly refurbished Encina Hall.

The first design to make the cut under Casper’s new system was for a 1996 addition to the Paul Allen Center for Integrated Systems, by New Mexican architect Antoine Predock. Like many newer campus buildings, Predock’s creation is a thoroughly modern structure that takes its cues from Stanford’s past. On the outside, the award-winning building has a sandstone veneer and an arched main entry reminiscent of the Main Quad. At night, when the center’s lights are on, a nine-inch glass rim makes the copper-shingled roof seem to float above the masonry mass.

When Neuman leads campus tours several times each year, he sometimes hears objections to the look of the new buildings. “Ninety percent sign up because they want to know more about the architecture and are genuinely open to understanding it,” he says. “But there are always a few who ask pointed questions, sometimes pretty cranky questions. ‘Why does that have so much glass on it? It should have a red tile roof. It should look like the Quad.’” The University architect smiles. “It’s a point of view.”

Casper, too, welcomes such diversity of opinion. As he writes in the foreword to Stanford University: An Architectural Tour, by Richard Joncas, David Neuman and Paul Turner (Princeton Architectural Press, 1999), “While the Latin proverb says there is no disputing about taste, the Latin proverb is wrong. Aesthetics are an appropriate subject for debate, especially on campuses.” Overall, though, he is confident that the University’s latest stone age has left the campus pretty much as founders Leland and Jane Stanford would have wished. Still dignified. More beautiful. And forward-looking as ever.

Theresa Johnston, ’83, is a Palo Alto writer and frequent contributor to Stanford.

A Tale of Two Quad Buildings

What Class-Size Reduction Can't Do

Showbiz With a Mission