What Happens to Plants When the Planet Heats Up? 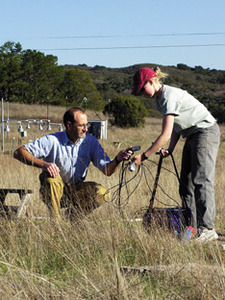 The once-brilliant patches of color—lavender storksbill, salmon-colored scarlet pimpernel, white hayfield tarweed—have thinned out in two fenced-off hectares of grassland at Stanford’s Jasper Ridge Biological Preserve. It’s not the “golden” look of late-summer California, but the result of an experiment designed to mimic the impact of global warming over the next 100 years.

For the past five years, researchers with the Global Change Project have been simulating four anticipated climate changes of the coming century: a temperature increase of two degrees Fahrenheit, a 50 percent increase in precipitation, a doubling of atmospheric carbon dioxide and increased concentrations of nitrogen in soil. As they’ve fumigated and warmed 128 quadrants of 32 six-foot circles in a scenic meadow, they’ve monitored changes in about 40 kinds of grasses and flowering forbs.

Among their findings: over three years, those plots exposed only to elevated CO2 lost 20 percent of their wildflower species and experienced an 8 percent decline in overall plant diversity. The latest surprise? Higher temperatures increased soil moisture by as much as 10 percent, contradicting the predictions of numerous climate models.

“In an annual grassland we have access to something that I think is a model system [for global warming], in the same way that fruit flies are a model system for genetics,” says Chris Field, co-principal investigator of the project and director of the global ecology department of the Carnegie Institution on campus. Grasses, unlike trees or forests, are small and tractable, he says, and in five years scientists have been able to track changes in five generations of plants.

On a summer day, each beaten-down plot looks like your basic patch of weeds. But as research coordinator Nona Chiariello gets down on her knees in the sunbaked dirt and pulls back brown stalks, three black coaxial cables are visible, snaking out of a white cap. They’re connected to stainless steel rods that are driven deep into the ground to measure soil moisture. Jutting out of the corner of one quadrant is a clear, 5-foot-long acrylic tube covered with foil that houses a scanning device that tracks the birth and death of plant roots. A slim sprinkler rises out of the weeds, along with a four-arm infrared heat lamp and a CO2 emitter. Eight of the circles recently succumbed to a grass fire; researchers may collect data from the burn before restoring the plots.

The Stanford project is the first to test the effects of four global warming elements—carbon dioxide, heat, water and nitrogen—in varying combinations. In one circular plot, for example, all four quadrants receive twice the normal amount of carbon dioxide but no additional heat, one gets added nitrogen, and another gets extra nitrogen and water.

“Our experiment is more like a lab than a traditional experiment” in scope, says Field, PhD ’81. “We’ve created opportunities to study lots of things, some of which we don’t have the expertise or resources to do, so we invite the world to come in and help us figure out what’s going on.”

Because there is more biomass below ground than above, a “whole lot of action” is happening out of sight of passersby, says Chiariello, PhD ’81. One experiment is tracking subterranean herbivory by soil arthropods (a.k.a. bugs eating plants underground), and another is exploring whether butterfly larvae may feed differently under elevated carbon dioxide. Chiariello herself is looking at the heavens—developing a technique that gives researchers small-scale measurements of what a satellite would see, looking down on the amount of light of different wavelengths that is reflected off the meadow. “This pseudo-satellite instrument is an effective way to have a week-by-week index of what is happening, as opposed to an annual harvest,” says Field. But at the end of the growing season, he adds, “the tried-and-true method still is to go in and whack the plants down.”

The project is funded through 2007, and at the end of a decade, Field expects to have data relevant to the world’s 20 or 30 major types of ecosystems, including tropical forests, needle-leaf conifer forests and desert shrubland. “We’d like to contribute to thoughtful discussions of whether we should be doing more or less to combat or minimize climate change,” he says.