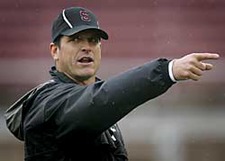 As a junior at Palo Alto High School, Jim Harbaugh had a summer job stenciling numbers on the bleachers in Stanford Stadium. “I used to stare down at that field,” he recalls. “And I so badly wanted to go to Stanford and play for the Cardinal.”

The teenager, whose father, Jack, was Stanford’s defensive coordinator in 1980 and ’81, went on to be a three-year starter at Michigan under the late Bo Schembechler. Harbaugh led the Wolverines to the Fiesta, Holiday and Rose bowls in consecutive seasons while compiling a 21-3-1 record. In 1986, his senior year, he was the Big Ten Player of the Year and finished third in Heisman Trophy balloting.

Named head football coach in December, Harbaugh is living his long-ago stadium dreams. As the Bradford M. Freeman Director of Football, he succeeds Walt Harris, who coached the Card to a 1-11 season last fall, its worst showing since the winless 1960 season. Harris had three years remaining on a five-year contract when he was fired.

At a campus press conference to introduce Harbaugh, athletic director Bob Bowlsby predicted that the new head coach “will do an absolutely extraordinary job of representing our University as our head football coach in the years ahead.” He went on to note, “Student-athletes enjoy playing for him, they have fun, they enjoy practice, they enjoy the recruiting process, they enjoy the energy that he brings to what he does every day.” In conversations with those who knew Harbaugh’s coaching style, Bowlsby added, “That is probably the thing I heard most frequently—that Jim Harbaugh makes the people around him better.”

A first-round draft pick in 1987, Harbaugh was an NFL quarterback for 15 years, starting 140 games and passing for 26,288 yards and 129 touchdowns. He played for the Chicago Bears, Indianapolis Colts, Baltimore Ravens, San Diego Chargers and Carolina Panthers, and was dubbed “Captain Comeback” for his late-game exploits. In the 1995-96 season, Harbaugh led the Colts to the AFC championship game, and was named the AFC offensive player of the year and NFL comeback player of the year.

From 1994 to 2001, while he was still playing in the NFL, Harbaugh served as an assistant coach to his father, then head football coach at Western Kentucky. Harbaugh was quarterbacks coach for the Oakland Raiders in their 2002 Super Bowl year, and again in 2003. For the past three years, 2004-06, he was head coach at Division I-AA University of San Diego, where he compiled a 29-6 record, guiding the Toreros to two mid-major national titles.

Harbaugh, turned out in a crisp white shirt, dazzling red tie and dark pinstripe suit, could barely contain his glee, and said he’d been busy studying game footage. “Football is played and coached by emotional, passionate people, and that’s the way I am,” the 43-year-old divorced father of three said. “I’m pretty hands-on, and if you come to practice, you’ll see me running around, doing pushups and calling plays. That’s the thing I love about the job—being on the field, being out there with the guys.”