An American Soprano in London 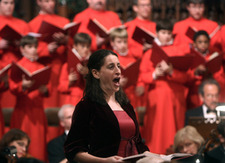 Every quarter, roughly 50 students move to Oxford, England, to study in the Stanford overseas program. Elizabeth Weisberg went to Oxford to study Anglican church music—and met so many people with the same passion for classical music that she has stayed for 13 years.

Soprano Weisberg has hit high notes all over England and the Continent, at such venues and occasions as the Royal Opera House at Covent Garden, the Harry Potter 7 soundtrack, the Monte Carlo Opera House and fashion designer Alexander McQueen's funeral. "I married a Brit somewhere in there, too," she says in a telephone interview. "He's a singer. We met singing in the BBC Proms, which is an annual concert series in London."

Weisberg, whose great-uncle Allie Wrubel wrote "Zip-a-Dee-Doo-Dah," displayed a talent for music so early that even her preschool teacher noticed. At Stanford, the music major sang in Talisman and Stanford Early Music Singers. After completing her senior year at Oxford and skipping Commencement—her father is law professor Robert Weisberg, so the family had already attended many Stanford graduations—she spent a year with a choir at Cambridge's Trinity College. Weisberg earned a postgraduate degree in singing performance at the Royal Academy of Music and embarked on a career of choral and church singing, professional tours with orchestras and choirs, and solo work.

Highlights have included singing backup for Elton John at the Royal Opera House and filling in (with only four hours' notice) for an ill soloist in Haydn's Creation with conductor Sir Mark Elder. At the McQueen funeral, she observed celebrities Sarah Jessica Parker, Vogue editor Anna Wintour, Björk and Kate Moss. But certainly one of the strangest moments in her career occurred when an audience member collapsed at a concert in Wiltshire, England. "Paramedics dragged her out, and we kept the performance going," she says.

She made her American debut in December as the soprano soloist in the annual Handel's Messiah at St. Thomas Church in New York City. (A New York Times review praised her as a "terrific communicator" who "sang with wonderful cultivation and clarity yet managed to retain a naturalness in her sound.") Her recordings include solo albums with New London Soloists and La Nuova Musica and numerous choral albums. This spring, she will perform in 10 concerts at St. Martin-in-the-Fields Church and tour to Bucharest with the Orchestra of the Age of Enlightenment. In September, she will perform in innovative Berlin opera/theater company Nico and the Navigators' world premiere of Rossini's Petite Messe Solonnelle.

Her goal is to do opera and solo work internationally, but she says, "I've already been successful in what I've done, so if I have to stop singing tomorrow, I can already say I've had a successful career."

Why does the Western world dominate? What happens as the East catches up? To find out, Ian Morris went back to the very beginning and crunched numbers.