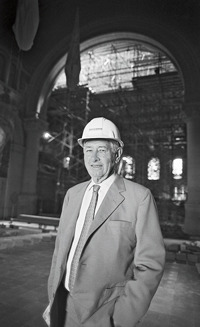 When Melvin B. Lane was spearheading the drive to restore Stanford Memorial Church after the Loma Prieta earthquake, he frequently would invite donors to the church for a bird’s-eye view of the project. First he and his guests would don hard hats. Then Lane personally would lead them up a dizzying ladder, out onto scaffolding that went right up into the dome. “Mel made a lot of trips up and down that ladder,” his friend and former dean of the chapel, Robert Gregg, recalls fondly. “He clearly enjoyed the project.”

Lane, ’44, the former co-owner of Sunset magazine and books, eventually collected $10 million for the restoration. It wasn’t his only campus legacy. As a trustee from 1981 to 1991, Lane was “a wise counselor” who “touched virtually every corner of Stanford,” says President John Hennessy.

Born in Des Moines, Iowa, in 1922, Lane moved to California as a boy when his father purchased Sunset magazine, a travel monthly named for the Sunset Limited, the Southern Pacific train that ran from New Orleans to Los Angeles. After earning a bachelor’s in economics, he served in the U.S. Navy during World War II, then joined the family business, overseeing its popular home and gardening book division until the company was sold to Time Warner in 1990.

An early and effective environmental advocate, Lane served as the first chair of the California Coastal Commission in the 1970s, building it into a model for regulatory bodies nationwide. “His constructive, goal-oriented approach was exactly the thing that was needed in the early days of the conservation movement in California,” says law professor Buzz Thompson, ’73, JD/MBA ’76, director of the Woods Institute for the Environment at Stanford. In 2004, Lane and his wife, Joan, established a professorship in interdisciplinary environmental studies.

Lane died July 28 in Atherton at the age of 85. In addition to Joan, he is survived by two daughters, Whitney Miller and Julie Lane Gay, ’81; four grandchildren; and his brother and Sunset co-owner, L.W. “Bill” Lane, ’42.

THERESA JOHNSTON, ’83, is a frequent contributor to Stanford.

Suited to the Work

In 1998, a moldy medieval prayer book sold for $2 million at Christie's. This is the story of why.