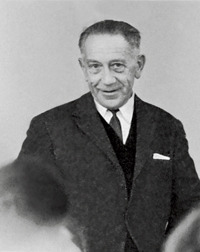 Like his name, A.W. "Wazi" Zimmermann offered all things, from A to Z. When he taught German to Stanford in Germany's first dozen groups, he was the perfect chalk to fill in the blank slates of curious students who'd come to the campus at Beutelsbach.

Arno Walter Zimmermann had been born in Germany's East and educated in its West. He offered eyewitness accounts about World War II and firsthand experience of East Germany's deprivations. In a country rich with low and high culture, he could do beer or Brahms. He could enact a scene from Goethe's Faust and sing from Beethoven's Fidelio—or he could imitate the Burgermeister's public quaff on the clock in Rottenburg ob der Tauber.

What made Professor Zimmermann such a Stanford standout was his accessibility. You didn't have to cruise the intellectual stratosphere to get his attention. And while he challenged you to produce, you didn't particularly care about your grade: it was the pure love of learning from this guy that drove you to read Heinrich Böll and Günter Grass.

He was so available that when he was done with der-die-das, he'd take us all to the sauna. Wazi introduced us to the dry heat, the switches and The Plunge into the ice-covered swimming pool. He wore "continentals"—those Speedo-like briefs that European men sport on all of the world's beaches. Talk about accessibility.

Wazi brought life to the labs and drill of modern foreign languages. In the sink-or-swim foreign language world, he made you take the plunge, tried to keep the water warm. He instilled in me a lifelong love of German and literature, which led in turn to a flirtation with Spanish and a stint in the Peace Corps. (After a circuitous route through several majors, I eventually got an MA, then a German Fulbright, and finally a PhD in German.) With Wazi's help, I entered the world of lifelong learning and came to heed Mark Twain's instruction to never let school interfere with my education.

Pilgrimage with a Purpose