A Freshman Takes the Title 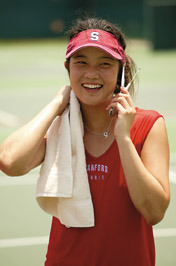 As the top junior player in the country, Amber Liu earned a wild-card trip to the U.S. Open in 2001. In August she’ll return to Flushing, N.Y., after winning this year’s NCAA women’s singles championship as a Stanford freshman.

“You’re in the locker room with all the pros you see on TV,” Liu says. “You see their routine, how they get ready for their matches with massages, and there are drinks for everyone, and it’s just a really neat experience.”

Liu has the enthusiasm of, well, a freshman. She was named both 2003 Intercollegiate Tennis Association Rookie of the Year and Pac-10 Freshman of the Year. She picked up the ITA crown at the NCAA finals in May, upsetting Tennessee’s top-seeded Vilmarie Castellvi 7-6 (5), 6-2. “It was overwhelming,” Liu says about her win, which came after the top-ranked, defending champion Cardinal (25-2) lost the team championship to host school Florida, 4-3, playing in front of 1,200 Gators fans.

ITA honors also went to head coach Lele Forood, named National Coach of the Year, and to Frankie Brennan, Assistant Coach of the Year. “It was very nice, but also ironic to get Coach of the Year the year you lose,” says Forood, ’78, who has led the Cardinal to two NCAA team titles in her three years at the helm. “I’m going to assume our coaching staff was honored because [the ITA] thought it was a pretty good feat with such a young team.”

Liu was one of four freshmen on a team with no seniors. She quickly stepped into the No. 1 singles spot and “picked up a lot of tricks” in the process, says Forood. “She’s very tenacious and plays a great mental game, and the areas we’re going to work on next are getting her stronger and more physically imposing.”

For Liu, it was a long introductory season to college play. “There are so many matches that you have to learn to bounce back and be ready to come out and play again,” she says. “But I’m a pretty motivated tennis girl and I work pretty hard, and I love it so much. It’s my passion.”

A Conversation About America

The United States has a powerful weapon: debate.