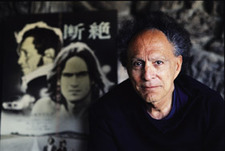 Four of the 17 chapters in Brad Stevens’s Monte Hellman: His Life and Films (McFarland & Co., 2003) are titled “In Between Projects.” It is a quintessentially Hollywood phrase for a man who is quintessentially non-Hollywood, a testimony to the rough-and-tumble life of independent filmmakers. According to Hellman, ’51, he is never in between anything. He is always working, always creating, always developing his next film.

Then, over the next 30 years, something funny happened: Two-Lane Blacktop gained a following. David Meyer listed it in The 100 Best Films to Rent You’ve Never Heard Of (St. Martin’s Press, 1997), citing “the picture’s peculiar enduring power.” And it was released on DVD in 1999. “When you play Two-Lane Blacktop against about 97 percent of the better-known and critically fawned-over films of its era, it blows them away,” says Steve Gaydos, executive editor of Variety.

Hellman now finds himself the darling of film festivals from Montreal to Moscow. From his aerie high in the Hollywood Hills, he monitors a constant stream of requests for interviews. Recently divorced, he intermittently harbors itinerant screenwriters and visiting European filmmakers. His house is a warren of creativity, its walls packed with books, scripts, videos and DVDs. Each room opens onto the deep natural pool in the yard, whose calm seems to balance the frenetic activity indoors.

Hellman views his newfound status with ironic detachment and is quick to divert conversation away from his career. During my visit, he pulls out an obscure South Korean film and plays a five-minute scene of a young woman crying—one of the best crying scenes ever filmed, he tells me.

Hellman launched his idiosyncratic career at campus radio station KZSU. “It was much easier to move to the top in radio at Stanford than in the theater department,” he says. “At KZSU you could do plays, since nobody paid attention.” He produced his own version of Orson Welles’s War of the Worlds and wrote and directed a soap opera called Pathway to Passion.

After Stanford, Hellman studied film at UCLA and co-founded the Stumpville Players, a summer theater troupe of Stanford and UCLA alumni performing in Guerneville, Calif. He became an apprentice film editor on the ABC television series Medic, then set up his own drama company in Los Angeles in 1957.

The Theatergoers Company lasted a year, during which Hellman directed Waiting for Godot and The Great God Brown, before the building was sold. “[Film producer] Roger Corman had been one of the investors in my theater,” Hellman says. “He said I should take [the sale] as a sign and get into something ‘healthy.’” That turned out to be directing a movie for Corman’s new Filmgroup company.

The Beast from Haunted Cave (1960), starring Frank Sinatra’s nephew Richard, featured gold thieves and a giant web-covered, spiderlike monster. It had all the Corman hallmarks: a recycled script (Corman, ’47, had shot it, sans monster, as Naked Paradise in 1957), a first-time director, a budget of $33,000 and a 13-day shooting schedule in non-union South Dakota.

Two years later, Hellman got the chance to reprise his work on Beast and three Corman-directed movies, expanding them by 10 to 20 minutes for television. “I had fun, I was autonomous, and Corman didn’t care what I shot,” Hellman says. “The stock was different; I used whatever actors were still available.”

During this period, Corman also made Hellman associate producer of The Wild Ride, starring Jack Nicholson as a murderous, philandering hot-rodder. The relationship with Nicholson was cemented when Hellman directed him in two movies in the Philippines in 1964, Flight to Fury (co-written by Nicholson) and Back Door to Hell.

On their return, Corman sent the two off to Utah to make two Westerns: The Shooting and Ride in the Whirlwind, scripted by Nicholson. Shot in just 18 days and released in 1966, both have become cult classics. “Any number of meanings can be attributed to the elements on screen, most of them concerning the elusiveness of ever knowing ‘the truth,’” said Ed Gonzalez, writing of The Shooting in Slant Magazine. Director Quentin Tarantino hailed Whirlwind as “one of the most authentic and brilliant Westerns ever made.”

Sold to a company that packaged them for television, the two films never had a theatrical release in the United States. But in Paris, The Shooting ran for a year and Whirlwind for six months—“which makes me more fond of the French than most Americans are right now,” quips Hellman. Like Two-Lane Blacktop, they have been released on DVD (by VCI Video in 2000) and are finally finding an audience.

Hellman landed Two-Lane Blacktop—his one and only studio picture—in 1970, one in a package of five films produced by Universal. The experience was bittersweet. When Universal handed him the script, he immediately junked it and hired writer Rudy Wurlitzer, telling him to just retain the idea of a cross-country race.

It is an apt summary of the plot. James Taylor, playing the driver, and Brian Wilson, the mechanic (we never learn their names), wander from one hot-rod street race to another, living off their gambling. Laurie Bird joins them, seduces them and leaves them. Meanwhile, Warren Oates, in a Pontiac GTO, challenges them to race across the States.

Driver and mechanic show no emotion and rarely speak. Oates rarely shuts up, ping-ponging between ineffective anger and neurotic braggadocio. He tells everyone a different story about his past and how he acquired his car. He sees himself as a free spirit, a blue-highways cowboy, yet each of his comic (and they are comic) flights of fantasy peels away one more layer of clichéd thinking and blind obedience to American consumerism. In Two-Lane, as in his other movies, Hellman rejects a simplistic plotline and formulaic characters. “I don’t like to define character to the point where it’s easy to understand,” he says. “I don’t think people are easy to understand.”

Two-Lane’s ending is unlike that of any other movie. Hellman allows the film itself to literally burn up before our eyes. That final image might have been an omen for the movie itself. Mysteriously, it disappeared from the theaters almost as quickly as it opened. Hellman claims that studio head Lew Wasserman just didn’t like it or the other four films in the package and “tried to bury them. They opened in New York without any newspaper or radio or television ads. They were literally just thrown away.”

Hellman has since directed Cockfighter (1974), with Oates and Harry Dean Stanton; China 9, Liberty 37 (1978); Iguana; and Silent Night, Deadly Night III: Better Watch Out (1989). All have their ardent fans. During the filming of Reservoir Dogs (1992), on which Hellman was an executive producer, director Quentin Tarantino surprised an interviewer by reciting every line from Iguana’s beheading scene (in which a sailor must choose between cutting off his friend’s head or having his own cut off by the friend—an existential quandary worthy of Sophie’s Choice). As Tarantino put it: “That movie should have made Monte a household name!”

Fame still eludes Hellman, even as his stature in film circles grows. He is currently developing four movie projects, and on the way out of his office, he points at a wall of play scripts. “I’ve a couple of pet projects I’ve always wanted to do in theater. Le Diablo de Mon Dieu, the Sartre play, now that’s a tough one.”

Maybe one day he’ll get to it, in between projects.

Raymond Hardie is a playwright in Del Mar, Calif.

Farm-bred filmmakers redefine ) ) documentary, trying to get closer to the truth.

Facing Up to Reality