Leader of the Park 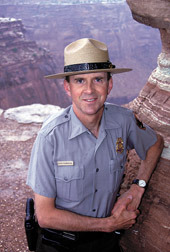 “This is the most beautiful place on earth,” Edward Abbey exults in the opening sentence of Desert Solitaire (1968). The famed nature writer was reflecting on his first morning in Utah’s Canyonlands National Park, an expanse of sweeping deserts, winding mazes of canyons and dramatic rock formations carved by the Green and Colorado rivers.

When Peter Fitzmaurice read Abbey’s book eight years later, he was settling into his first job with the National Park Service in Zion National Park, just a couple hundred miles southwest of Canyonlands. Fitzmaurice’s old, rat-infested trailer had no phone, not much of a bathroom and a radio that couldn’t even contact headquarters. Running two appliances at once was ill-advised.

“I thought I’d died and gone to heaven,” Fitzmaurice says.

That’s a sentiment he expresses often in recalling his 26 years with the Park Service. Ranger jobs across the West have provided many of the thrills an adventure-seeking nature lover could imagine: horse patrols in Zion, backcountry skiing missions in Yosemite, scuba rescues in Oregon’s Crater Lake, sea kayaking rounds in Alaska’s Kenai Fjords and even explosives work for avalanche control in California’s Lassen Volcanic Park.

“He sent home a picture once where he was dangling out of a helicopter during a rescue,” says his sister, Carolyn Hockstra, ’70. “I don’t think my mom realized exactly what being a ranger meant before that.”

Those kinds of escapades are a little less common these days. Since September 2001, Fitzmaurice has been the chief ranger at Canyonlands, where he lives with his wife, Shannon Skibeness, a wilderness manager in the adjacent Manti-La Sal National Forest, and children, Skyler, 6, Lauren, 4, and Nicholas, 2. The office work that comes with managing the park’s $5 million annual budget has taken away some from Fitzmaurice’s time outdoors. But it hasn’t changed his most important duties as a ranger: safeguarding the park’s 338,000 acres and the nearly 400,000 people a year who use them. That’s no short order, given Canyonlands’ status as a mecca for mountain bikers, rock climbers, whitewater thrill-seekers and BASE jumpers, who parachute off the park’s canyon walls.

“I was an adrenaline junkie, and that got me into ranger work,” Fitzmaurice says. “But what keeps me here is a sense of purpose. You’re helping people, and you’re helping preserve some of the most beautiful places in North America.”

Becoming a park ranger was hardly Fitzmaurice’s goal while at Stanford. “I figured I’d eventually go to law school or business school,” he recalls. But a year off the Farm, he had little desire to put his economics degree to use. So he packed up his Volkswagen van and headed for Yosemite, where a ski instructor job awaited. It wasn’t long before he realized he was on the right road. “By the time I got to Hayward [in the East Bay], I got the feeling I wasn’t coming back,” he says with a laugh. “Taking that job in Yosemite pretty much ruined me from ever doing anything else.”