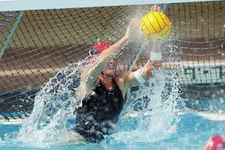 On the top of her right foot, just above her toes, Brenda Villa has a tattoo of five interlocking rings. She got it after she led the U.S. women’s water polo team to a silver medal in the 2000 Summer Games, scoring nine goals in the first Olympic competition for the sport.

While her mom isn’t fond of the tattoo, to Villa it’s a reminder of the upcoming 2004 Summer Olympics in Athens. That’s where she and All-American teammate Jackie Frank hope to grab the gold with the U.S. team, considered third- or fourth-best in the world. The two June graduates have joined three former Cardinal teammates—Ellen Estes, ’00, Margie Dingeldein, ’02, and Kate Pettit, ’02—for a year of intensive training and competition. Of the 15 players on the national team, 13 will be chosen for the Olympics. “Jackie is a potentially rising star internationally, and Brenda is one of the best players in the world,” says Guy Baker, head coach of the U.S. team. “Jackie’s position is already secured as one of two goalies, and it’s a safe bet that Brenda and Ellen will go.”

Frank and Villa powered the top-ranked Cardinal to a 21-3 season this year, losing to second-seeded UCLA, 4-3, in the NCAA championship game. Frank was named Division I Player of the Year and Mountain Pacific Sports Federation Goalie of the Year; Villa was named MPSF Player of the Year and left Stanford as the second-leading scorer in school history (172 career goals), behind Estes.

“Brenda sees things before anyone, anywhere in the venue, and she keeps this dialogue going, whether she’s making a pass or missing a shot,” says Stanford head coach John Tanner, ’82, the MPSF Coach of the Year. “There’s so much joy in the way she plays.” Frank, he says, is at her best when the pressure is greatest: “She blocks shots she has no business touching.”

Villa and Frank grew up in Southern California, where they were swimming against each other—and, often, against boys—on club teams by age 10. “She doesn’t remember it, but I do,” Frank says about the first time they competed. “Brenda’s so outgoing, and she was talking really loud and laughing—she’s a pretty memorable person.”

In the years since, the two women have traveled the world to tournaments in Australia, Canada, the Czech Republic, Germany, Greece, Hungary, Italy, Spain, the Netherlands and New Zealand. “A lot of players don’t like it when the opposing team starts cheering, but any cheering is fine with me,” Frank says. “Sometimes, when you’re in a foreign country, you listen for the silence, too, because that means things are going well for us. You try to work it either way, so you’ll play better.” For Villa, whose parents immigrated to the United States from Mexico and who speaks fluent Spanish, Cuba has been the highlight of her tournament travel. “I went twice and loved it,” she says. “You read all the Hemingway books and it’s like a magical place.”

The 5-foot-4 driver and 5-foot-11 goalie are looking forward to the daily six-hour workouts at the national training center in Southern California, followed by summer competition at the world championships in Barcelona and the Pan American Games in the Dominican Republic. “One of the fun parts about water polo is always having to read and always having to adjust to different situations,” Villa says. The bigger the crowd and the competition, the better for Frank: “If we played in the football stadium, and there was a pool in the middle, I would be so happy.”

Meet the New and Improved Me