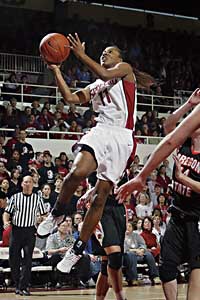 Heading into her 20th season on the Farm, head women’s basketball coach Tara VanDerveer didn’t have a set starting lineup. “We’re just going to go with the hot hands,” she says. “It’s extremely competitive, and they’ve got to play hard because otherwise they know someone else is going to be out there.”

Last year’s team, ranked No. 1 toward the end of the season, finished with a 32-3 record and its second straight NCAA Elite Eight appearance. Although the Cardinal (4-2) graduated five seniors, including three starters, the five-time defending Pac-10 champions once again are favored to win the conference title.

Pac-10 schools on the semester system got a jump on the Cardinal this year, due to a new NCAA rule that bars teams from practicing until the first day of class (September 26 at Stanford). “In the short run, that’s harder for us, but in the long run, better,” VanDerveer says. “Other teams may get tired and kids may be worn down later in the season.”

Returning starters Brooke Smith and Candice Wiggins are a formidable inside-outside combination and have the most game-time experience. Wiggins, last year’s Pac-10 Player of the Year, Pac-10 Freshman of the Year and a Kodak All-American, averaged 17.5 points per game last season and continues to lead the team in scoring. “Candice brings out the best in other people,” VanDerveer says. “And she’s making good decisions at the point.” Smith, a 6-foot-3 junior center with an uncanny hook shot, will anchor the post. “She’s not just a scorer, but she has great vision, runs the floor and gets breakaway layups,” VanDerveer says.

Three players are backing up Wiggins at point guard: junior Markisha Coleman, freshman Rosalyn Gold-Onwude and sophomore Cissy Pierce. Sharpshooting redshirt junior Clare Bodensteiner and senior Krista Rappahahn fill out the backcourt. Joining Smith in the paint are 6-foot-5 junior Kristen Newlin and 6-foot redshirt junior Eziamaka Okafor. Gold-Onwude and freshman forward Jillian Harmon played significant minutes in the preseason, which had VanDerveer talking about a faster, more athletic team this year. “Jillian’s a senior freshman,” the coach says. “She forgets she’s a freshman, and I yell at her like she’s a senior. She has great basketball instincts, and Brooke likes playing with her because she passes the ball really well.”

Assistant coach Charmin Smith, ’97, MS ’00, is hoping the entire team passes the ball really well. She has launched the Katrina Assist Pledge Program, in which fans pledge money for hurricane relief for each assist recorded during the season. Funds will be donated to the Bay Area chapter of Habitat for Humanity International to help rebuild homes in New Orleans and on the Gulf Coast. “It’s often the case with disasters that the early response from the American public is extraordinary, but the challenge is to not let the efforts die down and lose steam,” Smith says. “Our team and our supporters, along with Habitat for Humanity, are going to make a difference.”