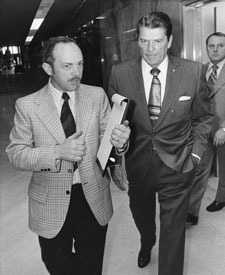 A journalist who served as the chief political correspondent in California for the Associated Press for more than three decades, Doug Willis followed Ronald Reagan from the statehouse in California through his presidential campaigns and covered Jerry Brown’s first stint at the capitol in Sacramento. Judy Willis, Doug’s wife, said he was known as a “walking encyclopedia” for his remarkable ability to piece together disparate facts into compelling news stories.

Douglas Ralph Willis, ’60, died in Sacramento on December 18 from complications following hip surgery. He was 77.

After entering Stanford on an engineering scholarship, Willis quickly switched his major to journalism. Chuck McFadden, a fellow AP reporter, recalled, “Doug started taking photos for the Stanford Daily, and he got such a kick out of writing the captions that he began writing actual news stories and changed his major.”

Willis launched his career at the Oakland Tribune and joined the AP in San Francisco in 1969. A year later, he was offered a temporary job at the Sacramento office, helping the bureau cover the state legislature. Before long Willis was promoted to correspondent, the bureau’s top position.

He got one of his first big scoops when he was brought in to cover state government, and he looked into how much taxpayers were spending on official trips taken by Gov. Ronald Reagan in a leased private plane. In his unpublished memoir, Willis said his investigation into these expenses “annoyed both Reagan and my press corps rivals for the next three years.”

Willis eventually traded the formality of the Reagan years for the decidedly less buttoned-up style of Gov. Jerry Brown. Willis broke the news in March 1976 that Brown would seek the Democratic nomination for president, phoning it in from the governor’s office to AP’s San Francisco bureau and beating rival news service UPI by 35 minutes.

According to McFadden, Willis used his math and engineering skills to help redesign the AP bureau in Sacramento when the state capitol building underwent a seven-year remodel. McFadden remembers when Willis and several other reporters were invited to tour the capitol renovation. A member of the group pointed out the building’s many fireplaces but no chimneys. The tour guide explained that the smoke from the fireplaces was funneled to a central chimney on the roof, behind the dome—to which Willis remarked, “Only one flue over the cuckoo’s nest.”

Willis is survived by Judy, his wife of 22 years; children, Katherine, Rebecca and Kevin; stepsons, William and Gunther Fernengel; three grandchildren; and one great-grandson.