The Colors of Worry

“Red means air raid warning. Green means my family is back online.” How it feels to be a Stanford student from Ukraine right now.

Supporters at a demonstration in White Plaza wore ribbons in Ukraine's national colors.

The ignorance in the chat lasted for 12 minutes. It was not a fake. On February 23 at 7:26 p.m. PST, we knew Russia began bombing Ukrainian cities.

The messages popped up as I presented my final project in a policy lab on resettling Afghan refugees. When we transitioned to the Q&A part of the class, all I could do was refresh Telegram and the New York Times live feed on my laptop. I counted down minutes until the discussion was over—holding my breath and tears back.

When the class ended at 8 p.m., I came up to my professor, saying, “It happened.” We had discussed the invasion just days before. “Have they invaded Eastern Ukraine?” he asked. “They are bombing Kyiv.” I couldn’t hold the tears any longer and rushed out of class.

Life on the Farm continued. Thursday classes came and went, as did the extracurriculars and the long-awaited socials—all without me. I froze in place. Physically I was still on campus, but my mind was in limbo. Even the most engaging conversations turned to white noise as I wished to jump back into the rabbit hole of news from home. 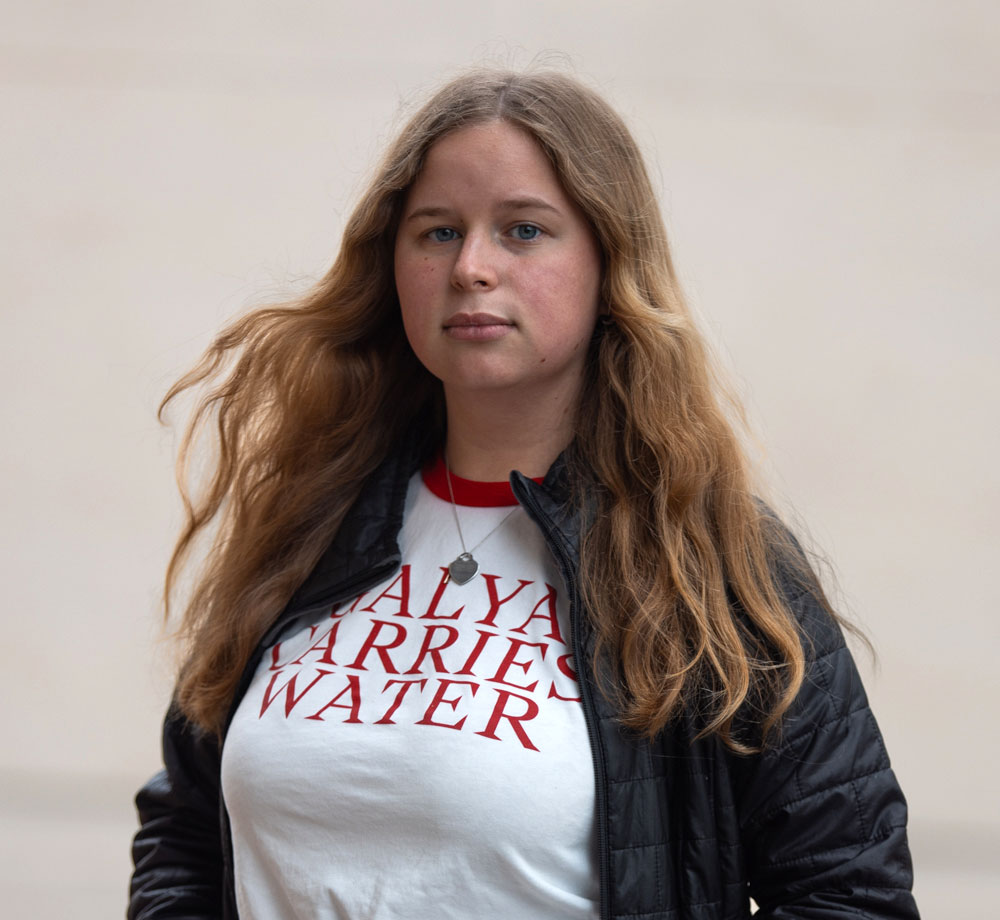 The home is in Cherkasy. I was born and raised in the heart of Ukraine, which overlooks the Dnipro River. My elementary school trips consisted of visits to the Cossack capital, learning about the fight for Ukrainian independence centuries ago. My high school literature lessons were comprised of works by the dissidents imprisoned for protecting the Ukrainian culture. My family and friends are now demonstrating continued resilience in their fight for freedom against the Russian invaders. From coordinating humanitarian aid to managing local volunteer networks, they are writing the history of independent democratic Ukraine.

Thousands of miles away, I feel every minute of the 24/7 news cycle. Most of the updates come from the feeds of Ukrainian news outlets on Telegram, an instant messaging app. In the blur of text, colors matter. Red means air raid warning, green means temporary safety for people back home. Red means new casualty report, green means my family is back online. Blue and yellow now mean freedom around the world, lighting up the night skies of New York, Berlin, London and San Francisco. But nowhere do they matter more than in Ukrainian towns, such as Kupyansk, where people raise the national colors over government buildings in the face of Russian military occupation. Uplifting messages are juxtaposed in the same Telegram feed with first-hand accounts of devastation in Ukrainian cities from air raids. Residential buildings, hospitals, orphanages, kindergartens, schools ablaze due to enemy fire turn into burns that don’t stop hurting in Ukrainian hearts. 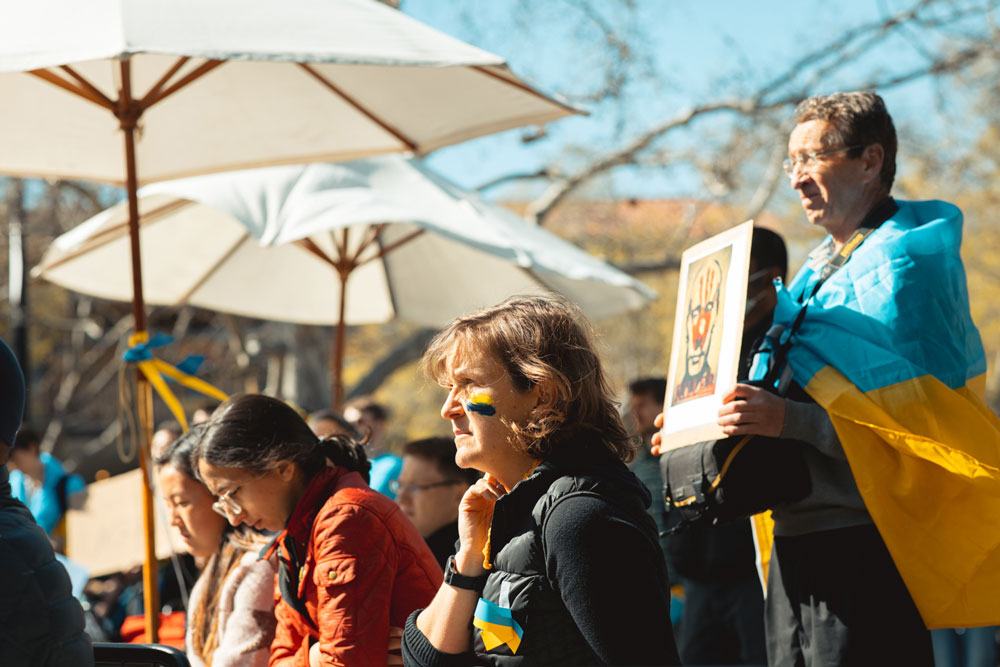 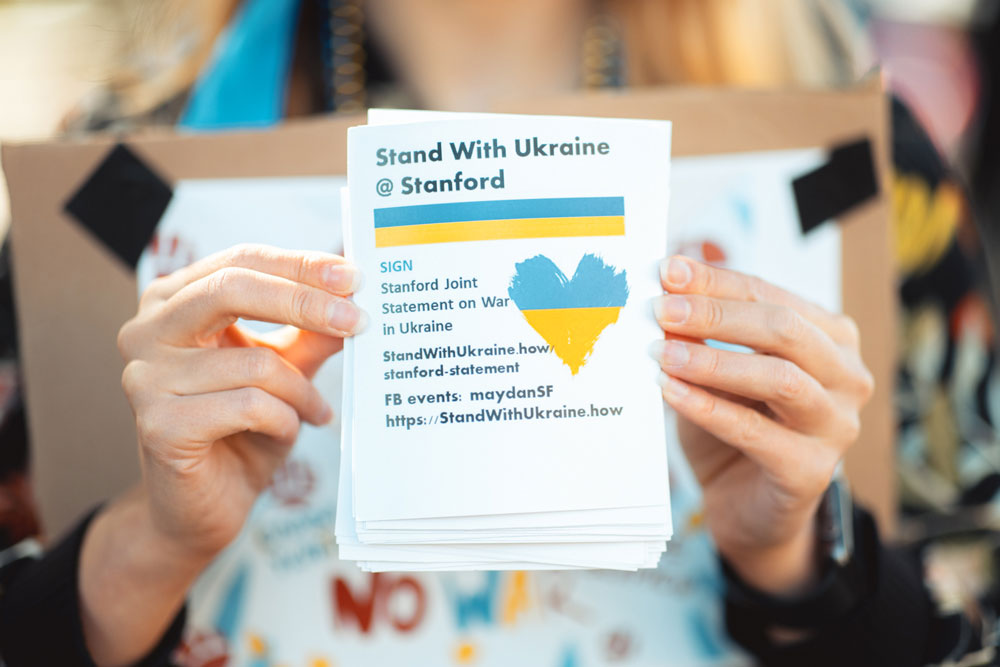 Like most of you, I am watching these videos with debilitating helplessness. But working with other people to help efforts back home makes it better. On the day after the invasion, I organized a protest with an informal student group of Stanford Ukrainians, calling for immediate sanctions on Russia as well as military and humanitarian aid to Ukraine. Two days later we created a website, standwithukraine.how, available in 17 languages, to centralize the resources for donations, volunteering and political lobbying opportunities. We also wrote a Stanford Ukrainian Community Joint Statement on Russia's War Against Ukraine, which has already attracted more than 1,000 signatures from the campus community and will later be used in political lobbying efforts. StandWithUkraine Stanford also continued to spread awareness by participating in a panel discussion on the Ukrainian students’ perspective on war, emphasizing the personal nature of the invasion and its impact. In a rally on March 4, Ukrainian, international and American students, as well as faculty, shared their perceptions of the war and the outlets they’ve found to help. We also partnered with Bay Area nonprofit Nova Ukraine, combining forces to collect humanitarian relief. Currently, we are working on fundraising for medical supplies and humanitarian aid to fill up a plane going to Ukraine on March 14.

In every word of support I get, I realize how powerful the Stanford community is. “The winds of freedom blow” on campus, but the commitment to tenets of freedom and democracy should expand beyond Palo Alto. As a political science major, I can cite many reasons for it. Our continued support matters for democracy in the region, global order and human rights. However, it also matters for selfish reasons. I relate our support to my mom, who wished for peace on her birthday this week; to my brother, who doesn’t know when he will go back to high school; to my dad, who volunteers to help defend our town every night; and to my grandma, who still wonders whether I get enough sleep every time I call.

Anastasiia Malenko is a junior at Stanford. She is a news editor at The Stanford Daily, originally from Cherkasy, Ukraine. Email her at stanford.magazine@stanford.edu.