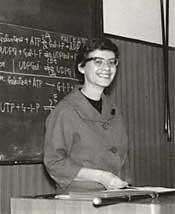 History perhaps will remember Esther Lederberg as a giant in microbiology—a correction to her unsung contributions to the Nobel Prize in 1958 for discoveries about how bacteria mutate. Lederberg, MA ’46, a professor emerita of microbiology and immunology, died November 11 of congestive heart failure and pneumonia. She was 83.

Esther Zimmer was born into a poor family in the Bronx and entered Hunter College at the end of the Depression. She intended to study literature or French, but switched to science. When she told her advisers, they were shocked, says her husband, Matthew Simon; they considered the move foolish because women’s career options in science were so limited.

She worked as a teaching assistant at Stanford while pursuing a master’s degree. Her income was so small that she and colleagues sometimes resorted to eating frog legs left over after dissections, Simon reports.

In 1946, she married Joshua Lederberg and joined him at the University of Wisconsin, where she earned her PhD. One of her first major breakthroughs was the discovery of lambda bacteriophage, a virus that lives in E. coli. This “temperate” phage didn’t kill off the host, but instead mingled with the host’s DNA. The work had implications for the study of more complicated viruses and for genetic recombination.

While studying mutations of bacteria, she and Joshua developed a laboratory technique called replica plating. By transferring bacteria from one plate to another, they could isolate mutations—like antibiotic resistance—and prove that they were present in the original setting. Eventually the couple used pieces of velvet to move colonies from one plate to another, but the initial experiments were done using the powder puff from Esther’s compact.

Joshua Lederberg and two men from other universities were awarded the Nobel Prize in 1958. In its presentation speech, the Nobel committee said “bacterial genetics has been developed, primarily through the efforts of [Joshua] Lederberg and his co-workers, into an extensive research field in recent years.”

From 1976 until 1985, Esther Lederberg directed Stanford’s plasmid reference center, and she continued to work at the lab even after she retired as director.

Simon and Lederberg met in 1989 through the Mid-Peninsula Recorder Orchestra, which Lederberg, an aficionado of Baroque and Renaissance music, helped establish. The couple married in 1993. Lederberg also is survived by her brother, Benjamin Zimmer.

The Countess of M-

This much was plain: Madeleine would not marry a man who didn't know her worth.

It's Official: Wie Headed to Stanford