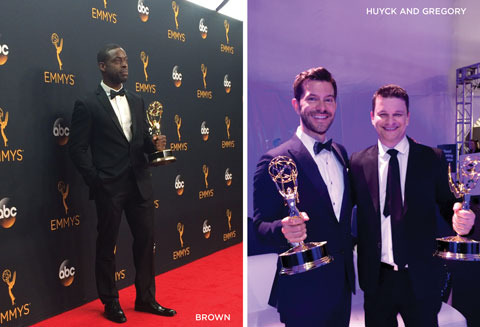 Actor Sterling K. Brown, ’98, won an Emmy for his portrayal of prosecutor Christopher Darden in The People v. O.J. Simpson: American Crime Story. Brown, who as a freshman dreamed of a career in business, found his home at the Farm in the theater and in the black community. In his acceptance speech, he extended his success to his alma mater, proclaiming, “Stand up, Chocolate Cardinal in the house!” It’s the first Emmy win for Brown, who previously was lauded for his role in the Lifetime series Army Wives. Also winning for the first time were Alex Gregory, ’92, and Pete Huyck, ’93, as members of the producing team for Veep, the HBO show that earned an Emmy for best comedy series. In addition to acting as co-executive producers, the comedic power duo wrote an episode for the show that was nominated for best writing for a comedy series. “I loved co-writing the ‘Mother’ episode with my writing partner,” Huyck says in an email, “ . . . because we got to tackle the challenge of finding the humor in an episode where Julia Louis-Dreyfus pulls the plug on her mother.” He and Gregory first collaborated as undergraduates at Stanford (“so we still use the tried-and-true system of handwritten notes dispatched via pneumatic tubes,” Gregory jokes).

Champion of the Arts