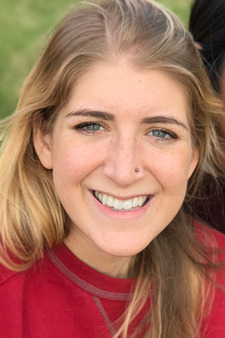 In her lifetime, Mallory Smith co-authored a book, advocated for protection of the Hawaiian Islands, and wrote about her experience living with a chronic, progressive lung disease.

Mallory Smith, ’14, died on November 15, 2017, from complications after receiving a double lung transplant at the University of Pittsburgh Medical Center. She was 25.

For most of her life, Smith fought cystic fibrosis, having received the diagnosis at age 3. She loved the ocean; it “seemed to make me healthy,” she said in a podcast in 2014. Researchers have found that salt water helps smooth the sticky mucus created by CF-affected lungs. Nebulizers can help, too, but Smith often sought the real deal: “I have used Hawaii as a natural delivery method for one of the most effective therapies that exists,” she said back then.

Smith was a writer; her prose reveals a frank voice and self-deprecating humor. Her mother, Diane Shader Smith, is wading through Smith’s journals in hopes of publishing more of her writing. In 2016, her book with horticulturist Susan Lenman Gottlieb, The Gottlieb Native Garden: A California Love Story, was published by the National Wildlife Federation.

In the podcast, which she recorded for biology professor Susan McConnell’s class, Smith opened up about her life with cystic fibrosis. “[Mallory] had an amazing ability to look at her own situation with the sort of . . . what’s the word?” McConnell says. “She wasn’t really sentimental about herself. She was frank about her illness.” Smith discussed how her lungs had been colonized with a devastating bacteria that carries extreme health risks and makes a lung transplant unlikely to succeed, and how that process is a metaphor for how Western colonization threatens Hawaii’s natural habitat. As she speaks, the sound of waves alternates with the whir of machines testing her lung function. “She discussed the stewardship of the earth in parallel to her own stewardship of her body,” McConnell says. “It is a moving and impassioned plea. I was blown away by her ability to make her own suffering a metaphor for something bigger.”

But Smith also enjoyed some of the fruits of typical young adulthood. At a New Year’s Eve party in 2015, she met a Stanford graduate student, Jack Goodwin, MS ’17, and the two dated until her death. He emphasizes her concern for others. “She put her entire passion into it and would listen, listen, listen,” says Goodwin. “She cared deeply about the well-being of her friends.”

While she was an undergraduate, Smith spent time with her uncle Danny Shader, MBA ’89, and his family at their home in the Bay Area. She had her own space carved out in the furnished basement to do the hours of daily breathing treatments required to prolong her life. “She would just power through it,” he says. “I never ever heard her complain.” Shader accompanied her to an increasing number of hospitalizations at Stanford as her disease progressed.

In the fall, as Smith’s lungs continued to fail, she embraced her last chance—the double lung transplant—and traveled to the University of Pittsburgh, where the doctors were willing to try. Still intubated after her surgery, Smith looked at Goodwin, who had flown out to be with her, and wrote him a note: “You have so far exceeded my expectations for what is possible with love.”

Smith is survived by her parents, Mark Smith and Diane Shader Smith, her brother and her grandfather.

The Environment and the Bottom Line

Sometimes, policies can protect both. Biologist Gretchen Daily shows us how.