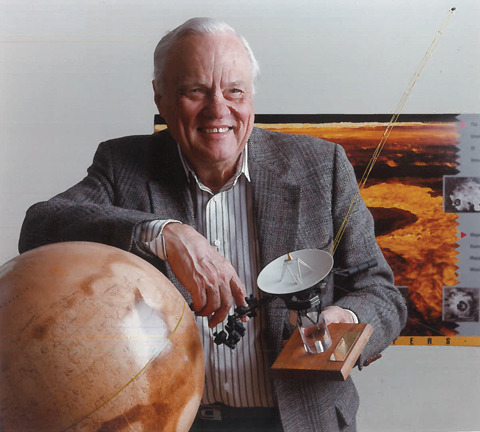 Von Eshleman’s fascination with the sun, the stars and the planets started during World War II, when he served in the U.S. Navy. While he was stationed in Italy, Eshleman, an electrical engineer, became curious about sonar and radar, and he grew interested in the idea of bouncing radio signals off the surface of the moon and the sun. Although his ship-based experiments did not succeed, the techniques he developed and his enduring curiosity would guide his career for the next 60 years as an expert on radio science and planetary exploration.

Eshleman attended the General Motors Institute of Technology (now Kettering University) while he was still in high school. He went on to Ohio State University and then to George Washington University, where he received his bachelor’s degree in electrical engineering in 1949. After he earned his master’s degree and his doctorate at Stanford, he stayed and became a research professor. In 1962, Eshleman co-founded the Stanford Center for Radar Astronomy with his colleagues Allen Peterson, ’48, MS ’49, PhD ’52, and Ray Leadabrand, ’50, MS ’53, PhD ’55. The center oversaw two-way dual-frequency radio propagation between Stanford’s 150-foot parabolic antenna (known as the Dish) and the Pioneer 6, 7, 8 and 9 space probes, which orbited around the sun and measured the density, velocity and structure of the solar wind.

During the mid-1960s, Eshleman and his team turned their focus to planets and the telecommunications signals used to transmit spacecraft images and other data. He went on to work closely with NASA on the Mariner, Voyager, Galileo and Apollo space programs, and served at the State Department as an adviser to President Nixon. He moved on to teaching and developed a class called Planetary Exploration, which was geared toward undergraduate students who weren’t astronomy majors, and he adjusted a graduate-level electromagnetics class to attract a broader audience. He retired from Stanford in 1992.

His son David says, “My father taught me that science is not a subject but a process for arriving at the truth. To apply the scientific method is to thoroughly test an idea to see if it holds water. He showed me that humans have but one shot at understanding the workings of the physical world, and that’s to rigorously apply the scientific method.”

Eshleman was predeceased by his son Eric. He is survived by his wife, Patricia; his children David, Angela Erickson and Kathleen; and six grandchildren.