Who Winds the Clock?

And other stories from a Stanford landmark.

Tourists and kids love seeing him in action, but Michael Hazard’s commitment to the clock at the center of campus gets split opinions among his friends. Since his first quarter at Stanford, the junior has been making weekly trips to wind the ancient timepiece, check its accuracy and, occasionally, show it to classmates.

But the computer science major is just the latest in a long line of volunteers to gain quiet satisfaction from helping to keep the landmark ticking. Recruited by his freshman resident assistant, also a clock winder, Hazard has come to appreciate the timepiece’s quirks, right down to the alternating sounds of the passing seconds. “I really like to sit down in the clock,” he says. “Everything has its own noise. 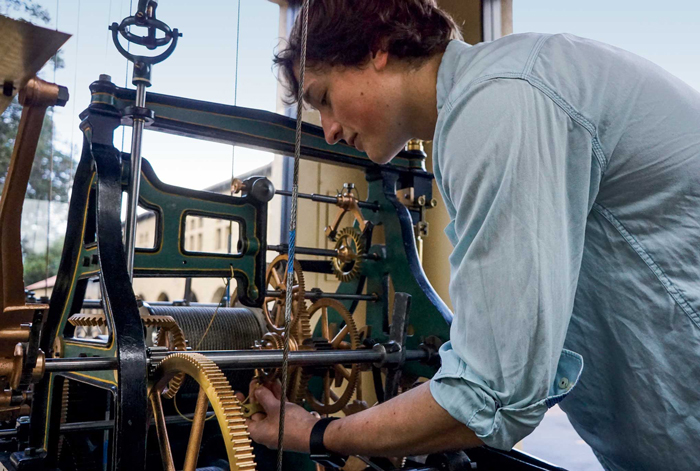 Michael Hazard, '19, adjusts the mechanism that operates the clock.

The work places Hazard in a history that began in 1899, when Jane Stanford commissioned the clock from the Seth Thomas Clock Company. At first it was installed in pride of place, a tower rising above Memorial Church. “The clock is the finest built and best-operated machine on the Coast,” the Daily crowed in 1902 after the bells were brought to pitch.

Four years later, the tower collapsed in the 1906 earthquake but the clock survived. In 1915 it was placed in a new shingle tower behind Memorial Church, which would be its home for the next 50 years.

THE PULSE OF STANFORD

If the chimes sound familiar, they should. The four bronze bells toll the Westminster Quarters, the melody that’s been ringing from London’s Big Ben for 160 years. Indeed, the Quarters — thought to be inspired by Handel’s Messiah — are likely the most popular clock chimes in the world.

In early years, they played a crucial role in campus life. “Stanford’s supposedly dependable chimes were two and a half minutes off this morning, thereby messing up the schedule of classes considerably,” the Daily groused in 1916.

“Without the tower clock, life on the campus would be disorderly and unregulated,” the paper wrote in 1925. “Not only does the clock chime the quarter hours and strike the hours, but it also rings all the electric bells by which students go to and from classes.”

By 1967, the clock’s importance had diminished. The tower was razed, and the clock was placed in deep storage. In the early ’80s, David Beach, now a faculty member and director of the Product Realization Lab, got a call from Henry Fuchs, a mechanical engineering professor bent on rescuing it from oblivion. The two managed to assemble the mess of gears into “marginal” working order on the steps of the now-bygone Terman Engineering building. Soon after, trustee William Kimball donated the money to build the clock’s present home, the tower overlooking the southeast corner of the Outer Quad.

The night before that tower’s opening, in May 1983, seven students from the Chaparral assembled in the darkness, clambering up a ladder to turn the clock into a giant Mickey Mouse watch.

Just before the ceremony, Dorian Clair, a local clock expert, noticed the 3-foot mouse, whose gloved hands had gotten stuck. He climbed up to the tower’s bells to pull off one of Mickey’s arms.

The clock sprang back into action and school officials embraced the joke, letting the one-armed mouse remain for a week. “We spent a lot of time looking up at our work feeling very pleased with ourselves,” confesses Trey Ellis, ’84, the Chaparral’s editor at the time. 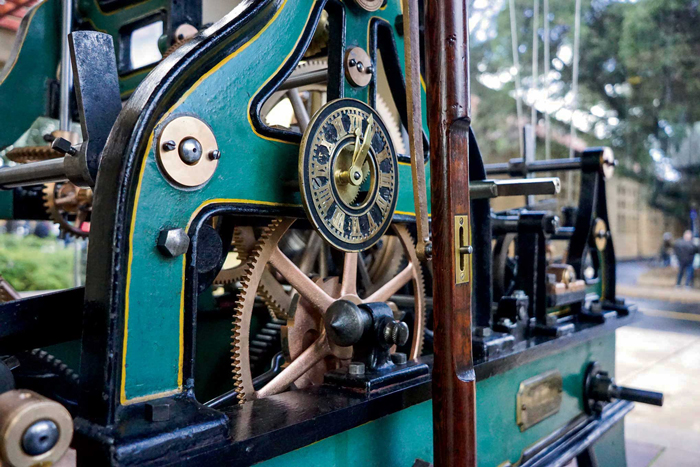 SAME AS IT EVER WAS

Even in more modern times the clock stirs passions. If the chimes are off, the calls come in, says Kathleen Baldwin, a facilities manager who oversees the clock. In 1994, a clockmaker turned engineering doctoral student named Rob Bernier grew so agitated by its inaccuracy that he threw himself into fixing it, beginning a seven-year stint as clock custodian. “It hurt me that such a beautiful clock movement wasn’t working,” he told the Stanford Report toward the end of his tenure.

Some who work within earshot still lean on its reminders. “It’s how I know my meetings are over,” says Dan Schwartz, dean of the Graduate School of Education. 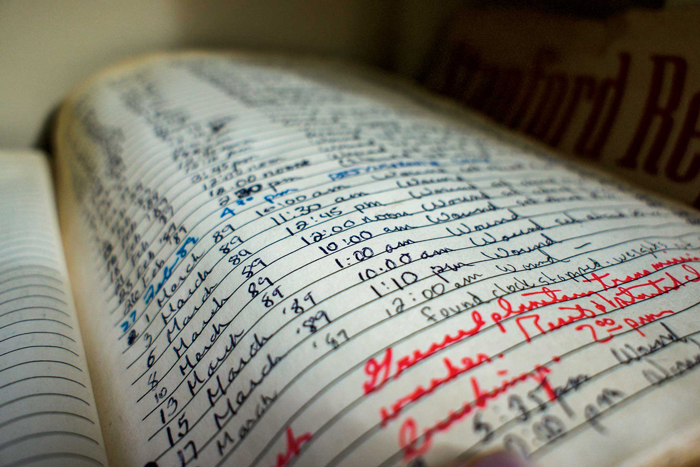 The clock’s winders have logged their visits in this book since the 1980s.

Twice a week, winders raise the falling weights that power the clock and measure its accuracy. Occasionally, they make tweaks like adding (or removing) coin-size weights from the pendulum to change the speed of its swing. (Each visit, which typically takes around 15 minutes, is recorded in a yellowing log dating to the 1980s.)

Daylight saving time requires special effort. Hazard’s preferred method for springing forward an hour is to still the pendulum for 23 hours before swinging it back into service, a practice that is less laborious than moving the mechanism forward manually, which can take up to two hours.

Serious repairs are handled by Clair, the clock expert, who visits campus three times a year to brush the gears, rotate the bells and make other adjustments. In July 2017, he removed the entire apparatus to San Francisco for a deep cleaning and found little degradation since his last overhaul a decade ago. Unlike the digital devices that dominate timekeeping today, the clock could easily last another century, he says. “The life expectancy of this is as long as you take care of it.”

In Two Years, There Could Be 10 Million Self-Driving Cars on the Roads

A laboratory at Stanford is working madly to keep us safe in that future.