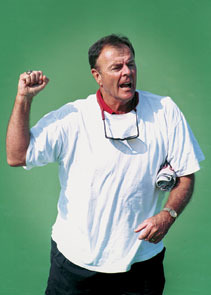 Nearly everyone has heard of March Madness, the crazy weeks when college basketball seems to take over the world. Director of tennis Dick Gould aims to create a May Madness that will take over the Peninsula.

More than 400 of the best collegiate tennis players. Tens of thousands of fans. Men and women pursuing NCAA titles in the same location for the first time ever. An extravaganza celebrating 100 years of the NCAA, 50 years of the Intercollegiate Tennis Association and 25 years of women’s NCAA sports. “It’s a million-dollar baby,” says Gould, ’59, MA ’60, who has spent the past 18 months preparing for the championships, to be held at Stanford May 18 to 29.

Gould aims to make the event special, like a college-level Grand Slam tournament. He has raised almost $1 million in funding and recruited 400 volunteers. There will be concerts, banquets, speakers (including astronaut Sally Ride, ’73, MS ’75, PhD ’78, and Hewlett-Packard CEO Mark Hurd), and a video montage of “magic moments” from past championships. The event will be advertised on buses, with banners on El Camino and through proclamations adopted by every city council around. “We are trying to create a community buzz,” Gould says.

Of course, there will be top athletes batting at yellow balls, too. As in basketball, 64 teams will play the first two rounds on the home courts of the top 16 seeds. Then the women begin team play at Stanford on May 18, followed by the men on May 20. With coaches, parents, boosters and other fans, Gould hopes this championship will break the all-time attendance record for NCAA tennis: 34,184, set 13 years ago at the University of Georgia.

Having men and women together for the first time adds to the event, says men’s head coach John Whitlinger. Rooting for the Stanford women—perennial championship favorites—contributes to his players’ enthusiasm, he says.

And it could boost the spirits of locals, too. “It’s exciting to see the emotional ups and downs of a team tennis event,” says Whitlinger, ’76, who won both a singles and a doubles championship for the Cardinal in 1974. “It could hook you to be a big college tennis fan for a long time.”

The World According to Azim Premji

To Ceviche with Love