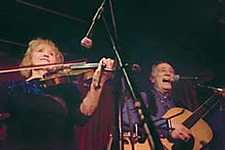 The farewell concert fell on Fat Tuesday. A little impishness was in order.

Mary Lou Cooper plunked a heavy-duty Dolly Parton wig on herself and one on her surprised husband for the song “I Wonder Where You Are Tonight.”

A little sheepishly, Don Cooper on rhythm guitar said to his wife on the fiddle, “I’ll back you up a little.”

“You better back me up big time,’’ Mary Lou replied. “This is a duet!”

Few bands stick together as long as 11 years, but Wild Oats ’n Honey had done it, starting when the fiddle, banjo, bass, guitar and mandolin players were gainfully employed. Now, with members retiring from their professions and trickling out of the Bay Area, they drew one last standing-room-only crowd on February 28 to Sam’s Bar-B-Que in San Jose, where they had appeared nearly every month for the past four years.

Wild Oats ’n Honey got together because of a church sermon. A new minister at Foothill Covenant Church in Los Altos observed that churchgoers didn’t know much about one another. “For example,” Don Cooper remembers him saying, “who knows about the congregant who plays the fiddle with her husband on mouth harp and guitar?”

A banjo player introduced himself to Mary Lou and Don, and their jam jelled so nicely that he invited a guitar-playing co-worker and a player his barber knew. Mary Lou recruited her cousin, another fiddler. Rounding out the group were sound engineer Willy Lange­veld and bassist Ralph Nelson, PhD ’73, both physicists at the Stanford Linear Accelerator Center. “We’re two people larger than most bluegrass bands,’’ Don Cooper says—another reason to appreciate the group’s longevity.

The musicians’ first gig was at a Neighbors Abroad fund-raiser in 1995, and they soon settled into a songbook of sweet bluegrass and Western swing. Their sound has been captured on four CDs, including a live show from Sam’s.

Cooper, who retired from family dentistry in 1999 and moved to Lake Tahoe, did not play music at Stanford. Coming from Loyola High School in Los Angeles, he was sent north on the Starlight overnight train by his parents and got busy with a psychology and pre-dentistry major. He worked as a hasher at Toyon Hall’s El Campo eating club, where the pay was three meals a day for serving two. He took up the guitar later, when he found himself the single father of two babies in diapers. “Kumbaya” and Joan Baez songs came to the rescue. Cooper says, “I went to a San Jose hock shop, bought a guitar for $12 and learned to play it. Those were long nights.”

Although the concerts are over, Cooper, 74, will maintain the band’s website, www.wildoatsnhoney.com. “It’s conducive to a reunion,” he says. And it feeds his belief in an aphorism he heard early on: “Music self-played is enjoyment self-made.”

The Real Scoop on the Women's Health Studies

No, you can t eat anything you want, despite what the headlines say.