Why you like organization shows; Pac-12 drama; ingestible robots

Your love of home-organizing shows is not random, but other things are.

An issue of the Stanford Daily, drawn from a bowl (January 19, 1942). An alum profile, selected at random (Bryant Johnson, ’17). A tale of chaos and weather. The July issue of Stanford features a cover package all about randomness and chance. You can discover why tidying up (or watching others do so) might help you cope with the uncertainties in life, explore how (theoretically) random data sets influence machine learning, and enjoy stories of happenstance written by your fellow alumni. Browse through the collection—chances are you’ll find something you like.

The end of an era.

For 50 years, Stanford had at least one alum on the Supreme Court. As the last of them, Stephen Breyer, ’59, retired last month, Stanford asked Breyer’s former clerks to reflect on his legacy. It is one of intellectual firepower, optimism and diversity, but also one of French television shows, Oreos and intergenerational skipping contests. “He has this wonderful sense of humor—this joy at the world, a joy at life,” said Andrew Dawson, ’03, JD ’08. The clerks spoke of Breyer’s guiding impulse to make the law work for everyday people, his commitment to hiring women and people of color, and his inclination to nurture consensus among his colleagues. Not to mention a positive outlook. “You know who will see whether [the democratic experiment of the U.S.] works? It’s you, my friend,” Breyer said upon announcing his retirement. “Of course, I’m an optimist, and I’m pretty sure it will.”

Take two robots and call me in the morning.

It swims like a submarine, jumps like a flea and crawls like something straight out of a nightmare. But don’t fear the “soft robotic origami crawler”—an accordion-like cylinder the size of a fingertip that a doctor may one day ask you to swallow. Developed in the lab of mechanical engineering professor Renee Zhao, the robot is propelled by magnetic fields and can travel over the slick, uneven surfaces of organs, gliding through the body’s fluids to pump out high-concentration drugs at specific targets. This is “the most robust and multifunctional untethered robot we have ever developed,” said Zhao, who is working on many “millirobot” designs. Some, she hopes, will be used to carry instruments or cameras into the body, eliminating the need for certain invasive procedures. Her dreams may have to wait for clinical trials, but your nightmares can start now: View the robots in action here. 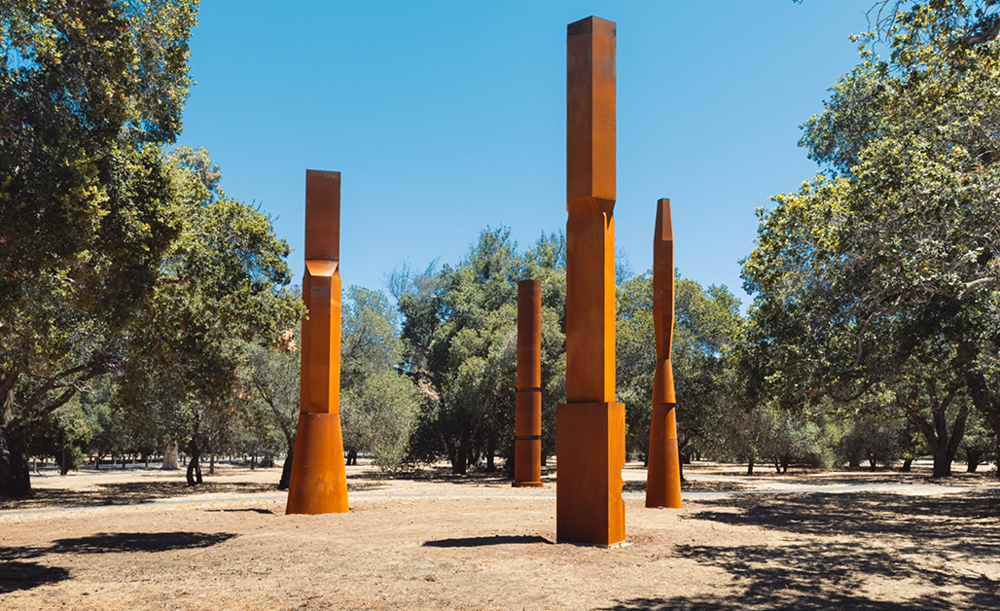 Artist Beverly Pepper didn’t exactly create the sculptures at the outer edge of the Arboretum for us. “The Stanford Columns,” Pepper’s newly installed collection of 40-foot-tall reddish-brown steel monuments, was built with future generations in mind. “She imagined how they might come upon this place in 500 or 1,000 years, wondering what these totems were for, who the creatures were that built them,” her daughter told Stanford News Service.

They’re just not that into us.

Last month, athletics giants UCLA and USC announced they’re leaving the Pac-12 for the Big Ten in 2024. “It’s a major blow to the conference, I don’t think there’s any two ways about that,” said Stanford women’s basketball coach Tara VanDerveer in an interview with the San Francisco Chronicle. “I mean, we’re talking over 50 years of history in terms of competition and regional competition. It’s a bombshell.” VanDerveer noted that USC and UCLA non-revenue programs will incur significantly higher travel costs to play schools as far away as New Jersey, which she felt could lead to women's sports being left behind. In the Stanford Daily, students similarly discussed the impacts of the 2024 move on individual UCLA and USC athletes, such as baseball players who, with some 60 games per season, could spend an enormous amount of time traveling for games. “Forget calling them student-athletes, this move effectively strips them of being a student at school,” said Zach Zafran, ’25.

In the near term, the loss of two football powerhouses (and the revenue that comes with them) could also have a detrimental effect on all sports at the remaining Pac-12 schools. In a statement, the Pac-12 conference reinforced its commitment to excellence in athletics. “We’ve long been known as the Conference of Champions, and we’re unwavering in our commitment to extend that title. We will continue to develop new and innovative programs that directly benefit our member institutions, and we look forward to partnering with current and potential members to pioneer the future of college athletics together.”

Weak in the knees.

If that pep in your step has been replaced by a creak in your knee, you are not alone. Almost a quarter of Americans age 45 and older suffer from osteoarthritis of the knee, and the majority of force that compresses the knee comes from the muscles surrounding it. While weight loss, knee bracing and joint replacement can mitigate pain, a simulation by researchers from the Wu Tsai Human Performance Alliance at Stanford indicated that people could reduce the force on their knees by engaging two calf muscles differently as they walked. So the scientists attached electromyography electrodes to measure participants’ knees and displayed their muscle activity on a treadmill screen, which helped the participants quickly adjust which muscles they activated as they walked. By increasing activation of the soleus muscle and decreasing activation of the gastrocnemius muscle, participants showed a 12 percent reduction in the load on their knees, a benefit equivalent to a person losing about 20 percent of their total body weight. Senior author Scott Delp, a professor of bioengineering and of mechanical engineering, says that retraining your muscles to walk differently long-term would likely require wearing a feedback device (which his team is working on) for a month or so. “You might not think of walking as a complicated activity,” Delp said, “but there’s a lot going on under the hood.”

Stanford’s Three Books program has announced selections for the incoming undergraduate class of 2026. Two books and a documentary film explore themes of biodiversity.

Monkeypox is making its way around the world. Stanford Medicine’s Clinical Virology Laboratory has launched a diagnostic test for the virus in order to accelerate accurate diagnoses and inform public health efforts.

Women typically have more responsibilities than men outside of work, making them less able to take jobs with unpredictable schedules or to pick up overtime shifts. Ultimately, they lose out on pay. Hoover Institution fellow Valentin Bolotnyy, ’11, writes in Harvard Business Review about how employers can help close the gender pay gap, including by hiring “float” employees to handle last-minute crises.

Magnificent lines, mesmerizing choreography and mangled toes. That’s ballet for you. Former dancer and current d.school lecturer Kelly Schmutte, ’06, MS ’13, is on a mission to save dancers’ feet with putty-like polyvinyl siloxane inserts.

Hoover Institution director Condoleezza Rice, a former U.S. secretary of state and Stanford provost, has been named a minority owner of the recently purchased Denver Broncos.

Brain probes; how to trim food waste; what to read this summer

SCOTUS analysis; anti-hunger molecule; lights out on the Farm