You’d be hard-pressed to find anyone who appreciates the Stanford Daily archives more than we do. Especially since their digitization in 2014, Daily stories of yore have sharpened our own stories on everything from the deadly Big Game disaster of 1900 to the university’s late-’70s dalliance with making Stanford’s official mascot a griffin. (Wiser heads ultimately decided a leonine eagle would be a “bit too he-man-ish” for the job, which is just the sort of historic Daily tidbit that curls our toes.)

But even we know it ain’t all gold in the student journalism vaults. There’s dross aplenty too. So it was with mild concern that this Stanford writer waited to learn the focus of this story, a tour of a randomly selected Daily issue. (Methodology: my 9-year-old son, rummaging blindfolded through mixing bowls containing hand-written days, months and years.) But fear not. The boy chose well. The four pages of the Daily that hit campus on Monday, January 19, 1942, give a lot to consider. 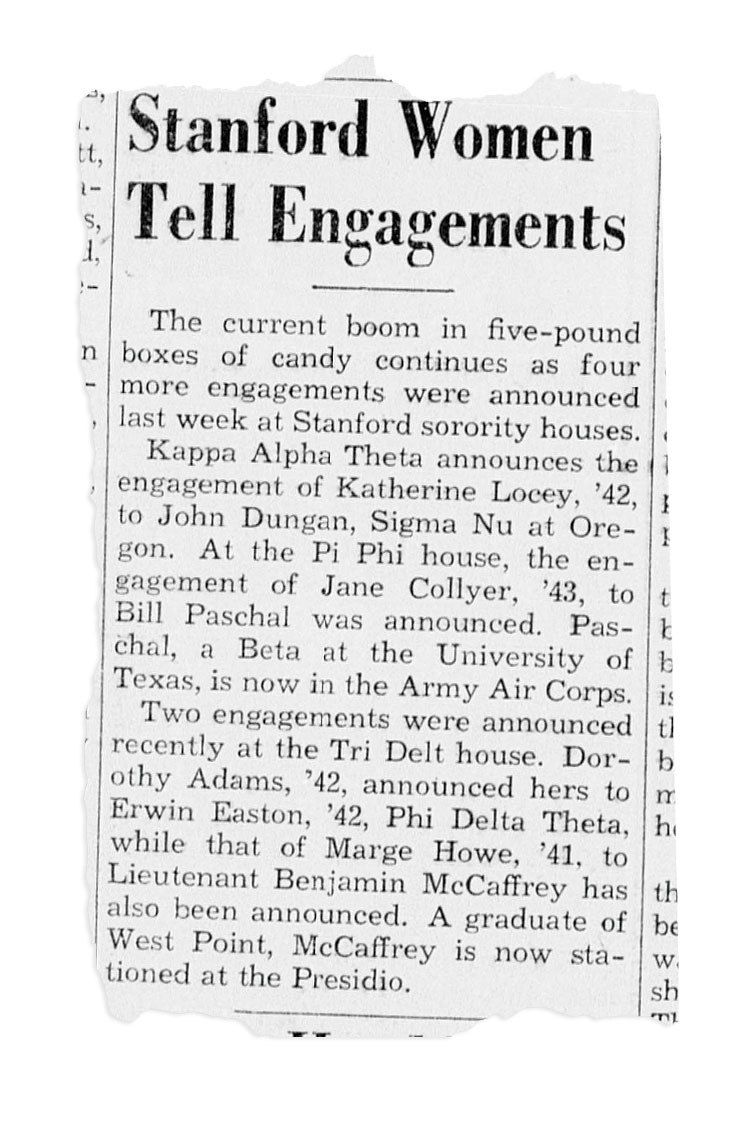 There is a patina of same-as-it-ever-was: Ram’s Head is holding tryouts, fraternities are facing questions of breaking Rush rules, and sororities are tallying pledges, oblivious to the fact that the university will dissolve the organizations two years later. (The decision, born of claims of exclusion and a schism between “hall women” and “Row women,” would bar women’s Greek organizations from campus for 33 years.)

But six weeks after the attack on Pearl Harbor, Vol. 100 Issue 68 of the Daily is unmistakably centered in a time of world war and the likelihood that not only will Stanford students soon be fighting, but also that the destruction might even reach campus. According to a front-page story, the university has been divided into 26 “civilian defense districts,” which are prepping for blackout drills designed to cloak campus in protective darkness. (One letter writer grouses that the blackouts are causing the campus post office to lock up early.) Lest enemy planes aren’t so easily deceived, leaders are also showing a movie on how to suppress fires ignited by incendiary bombs.

Elsewhere, the paper notes a 26 percent surge in the number of undergrads studying chemistry, “the focal point of vital wartime research problems,” and that public and private donations have added $100,000 to Stanford’s coffers for similar endeavors. Two months into America’s entry into the war, the calculus of college has been altered fundamentally. “Everything must be sacrificed to the vast need of production—and that includes the production of trained brains,” President Ray Lyman Wilbur, Class of 1896, MA ’97, MD ’99, is reported to have said to a group of alumni.

But even in war, this is still a student newspaper. The conflagration is also invoked to urge women to snap up 99-cent tickets to the upcoming Sadie Hawkins Hop. “This dance is your last chance to repay the fellows for the money they’ve spent on you,” said dance chairwoman Dodie Dolan, ’43. “Get a man before the Army beats you to it.”

Once ubiquitous, Sadie Hawkins dances might benefit from explanation in 2022. They were annual occasions in which female students had social permission to upturn convention and ask a man out. “This affair is the only campus dance to which Stanford women can drag the men,” as the Daily of January 16, 1942, put it. Based on the Li’l Abner comic strip (Google it), the dances became a national rage in the 1930s. Stanford joined the party in 1940, limiting tickets to 500, apparently due to the 1899 dictate of Jane Stanford that kept the female student body capped at 500 until its revocation in 1933.

The Sadie Hawkins dance is far from the only example in the paper of how thoroughly standards and expectations have changed in 80 years, not least around gender and romance. In 1942, marriage proposals were still a common, and publicized, feature of undergraduate life: “The current boom in five-pound boxes of candy continues as four more engagements were announced last week at Stanford sorority houses,” the paper reported. Not that everyone in 1942 exuded monogamous vibes. “Lives there a man with soul so dead, who never has turned his head, and said, ‘Hmm, not bad!’” quipped one editor in a column urging sororities to host more open houses so that men could meet “a lot of cute women.” The author, Harold Shafer, ’42, could not have known he had reason to seize the day. But tragically, two years later, he would be killed flying for the Marines in the South Pacific, one of nearly 300 Stanford casualties in the war.

The dissonance with our own times continues on the sports page, and not just because the “Frosh Mermen” of Encina Hall triumph in an interclass swim meet. There’s also a photo of Bill Cowden, ’42, whose outstanding defensive play, the paper says, was crucial in two basketball victories over local opposition the previous weekend. Two months later, the team would win Stanford’s only men’s basketball’s NCAA championship. Those familiar with Stanford history won’t be surprised to see Cowden referenced as a “veteran Indian guard.” The Indian was the athletics mascot from 1930 until 1972, afterprotests by Native American students led to its removal (the decision created the vacancy almost filled by the Griffins). But less well known is that the 1942 Daily used a derogatory term for Native people in headlines and another ethnic slur to refer to the wartime enemy in the Pacific theater. 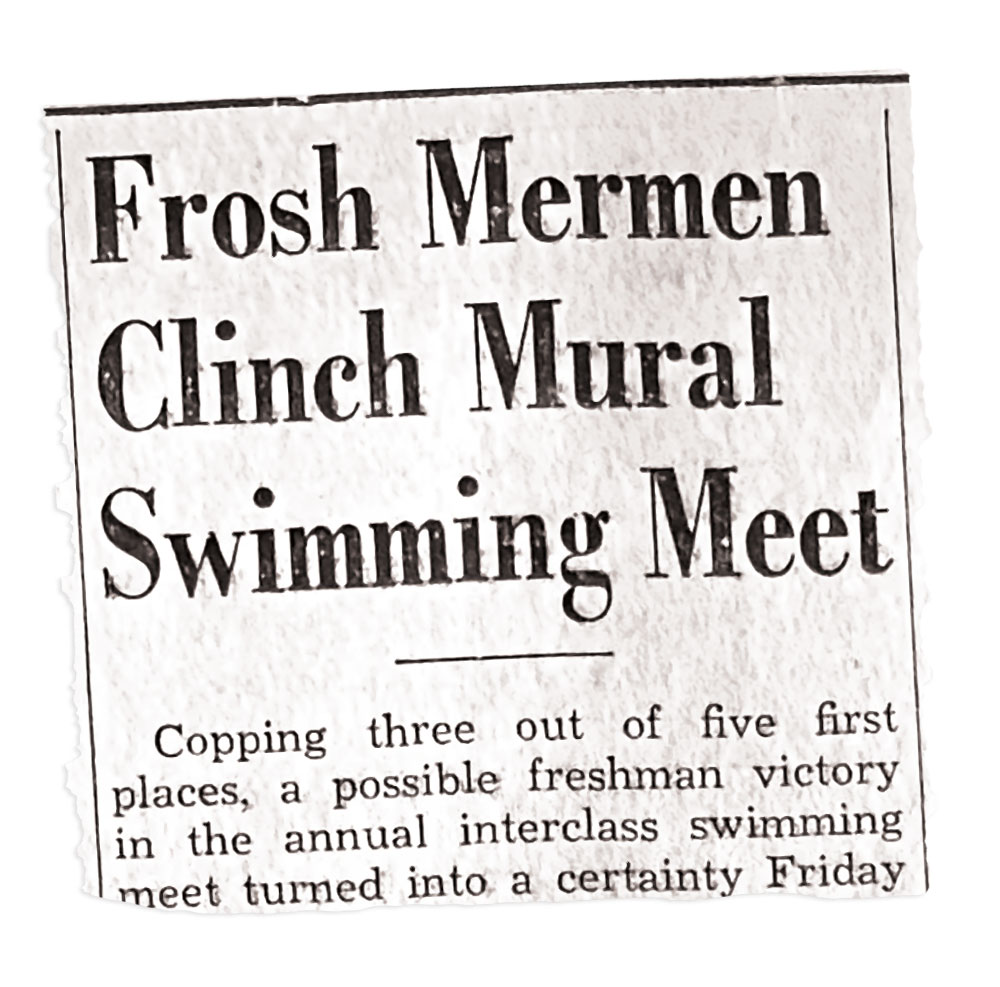 At top and bottom of the front page are mentions of erstwhile Stanford legends whose legacies have been reexamined. As was apparently annual tradition, David Starr Jordan, Stanford’s first president, gets fond wishes for his posthumous 91st birthday: “Today, with the alumni and faculty of every class from 1891 to 1941, the students of Stanford pause to remember and commemorate Dr. Jordan,” it says. Meanwhile, psychology professor—and pioneer in IQ testing—Lewis Terman gets a plug for a speech he’s giving to the Stanford Mothers’ Club.

Both men have undergone public scrutiny due to their support for eugenics. In the past five years, Palo Alto removed both men’s names from middle schools and Stanford renamed campus spaces bearing Jordan’s. The latter decision noted Jordan’s multifaceted legacy and importance in Stanford history, but also his “beliefs and actions that are antithetical to the values of our campus community” and that he “disparaged a broad swath of human populations and that he forcefully articulated views, unsupported by scientific evidence, of a hierarchy of races, ethnicities and cultures.”

The student journalists of January 19, 1942, took a more declaratory approach. “Unless the standards of Western civilization topple—and that is what we are now struggling to prevent—we must surely recognize in this man the hallmarks of greatness,” the Daily wrote.

But you know what they say about journalism being the first rough draft of history. The Daily archive isn’t the kind of news that stays news, but as a historical record, it only gets more revelatory.