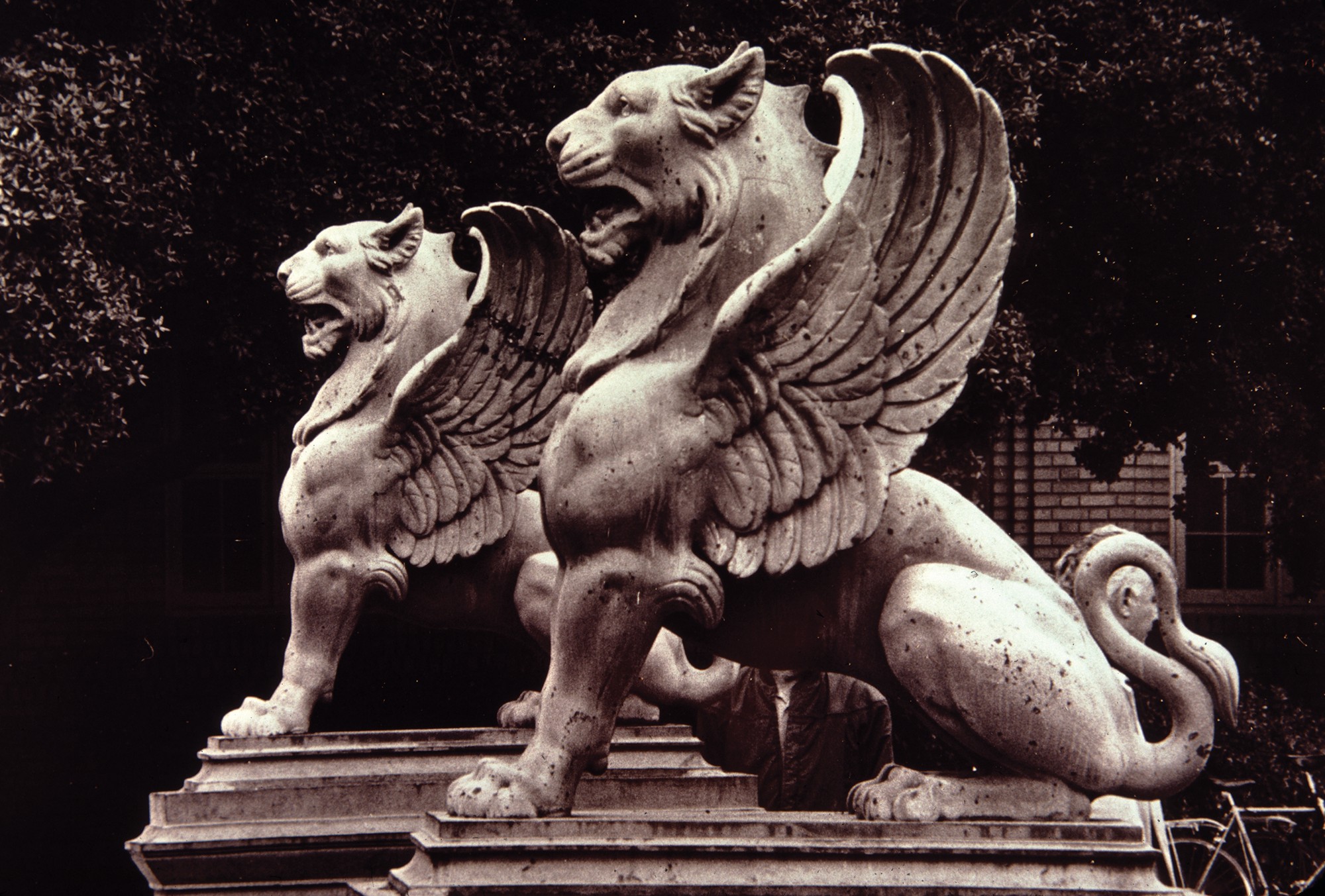 OK, maybe two lions don’t make a pride, particularly when they have wings. But the fact is, the cast-iron statues best known as the Stanford griffins have taken up a new post guarding the Stanford Mausoleum after more than a decade in storage.

Cast around 1870, the griffins spent their early existence as fountain ornaments at a palatial Menlo Park estate before moving to the Stanford Home for Convalescent Children, the precursor to Lucile Packard Children’s Hospital Stanford, in 1931.

Their story gets more dramatic after the university’s decision to drop the Indian mascot in 1972, which created a vacuum that students rushed to fill with alternatives like “Robber Barons” and “Thunderchickens.”

When those failed, a less ironic option took flight. “The Griffin symbol is majestic yet ferocious, both swift and alert, portraying valor and wisdom,” stated a student petition signed by 225 varsity athletes in 1978.

Then a school administrator pointed out a forgotten fact turned cosmic coincidence: “Did you know that there are two 4-foot-high golden griffins rusting on 4-foot-high rusting pedestals in the weeds of Children’s Hospital at Stanford?” Tom Killebrew, associate director of service operations, wrote to President Richard Lyman, referencing the abandoned Convalescent Children building.

Some debated whether the forlorn figures were really griffins or merely winged lions. Regardless, the Stanford Historical Society had them transported to a new home in front of Encina Gym, near Galvez Street and Campus Drive. And by the following spring, “Griffins” was outpolling “Trees” in a mascot referendum.

Ultimately, the push for “Griffins” as the new mascot flagged — griffins were “a bit too he-man-ish,” a Daily writer explained. The statues quietly stood their ground until they were removed during the gym’s 2004 demolition. Donald Price, ’53, MBA ’58, never forgot them, though. Price researched the griffins’ past for the Historical Society, and his annual queries about their return helped bring them back.

What Elizabeth Jameson Wants You to Know About Human Fragility

After being diagnosed with multiple sclerosis, the former civil rights lawyer began creating provocative works of art from the scans of her own diseased brain.