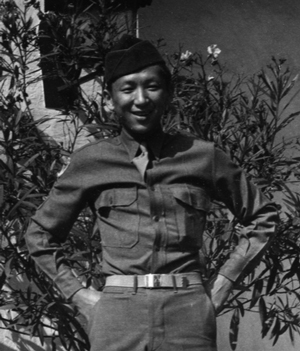 As a child, Eddie Fung helped his mother supplement meals by scrounging for fresh produce and meat in San Francisco’s Chinatown. Those same skills later helped him survive more than three years as a prisoner of war during World War II.

Edward “Eddie” Fung, ’53, whose story was memorialized in the 2007 book The Adventures of Eddie Fung: Chinatown Kid, Texas Cowboy, Prisoner of War, died at his home in Santa Cruz on March 25. He was 95.

Born in 1922, Fung left San Francisco on a bus at the age of 16 to become a cowboy in Texas. After working as a ranch hand, he enlisted in the Texas National Guard in 1940. His battalion and other Allied troops were overpowered by the Japanese on Java (now part of Indonesia), surrendering in March 1942.

The Japanese forced Fung and thousands of other prisoners into hard labor to build the Burma-Siam railroad made famous in the film The Bridge on the River Kwai. (When Allied forces bombed the railway’s bridges in 1944, Fung was among those sent to repair them.) Nearly 100,000 prisoners and civilians lost their lives building the supply route.

Despite his experiences in the war, Fung maintained a sense of optimism and a spirit of adventure. In his weakest state, suffering from dysentery and malaria and down to 60 pounds, he decided he wanted to keep living just “to see what the next day would bring,” according to his book. To celebrate his 21st birthday, he managed to procure some Chinese food, serving his friends a spoonful of each dish.

“Eddie rationalized in a positive direction: ‘No matter what happens to you, you can frame it in a way that won’t drag you down,’ ” says Becke Freitas, whose father served in the same battalion.

Fung’s wife, Judy Yung, who met Fung in 2002 while interviewing him for another book, says Fung was most proud that “he survived with dignity.”

“Being able to survive and not hurt anyone in the process was always very important to him,” says Yung, who edited The Adventures of Eddie Fung from their interview transcripts.

Indeed, Fung often put his fellow soldiers’ needs above his own. Although he was allergic to quinine, he smuggled a case of the malaria medicine out of the Japanese headquarters for the benefit of other prisoners.

After the war, Fung studied chemistry at Stanford, eventually working as a metallurgist at Lawrence Livermore National Laboratory. He retired at the age of 55 and later became a tai chi master.

Friend Ruthanne Lum McCunn says she once asked Fung why he retired so early, and he answered: “To think.”

Fung, who was recognized as a “trailblazer and a war hero” by U.S. Senator Kamala D. Harris in the Congressional Record on June 14, was predeceased by his former wife, Lois. He is survived by his wife, Judy Yung; his brother, Bill Fung; and 10 nephews and six nieces.