The camera zooms across campus toward Hoover Tower, classical music playing in the background, then settles indoors on a student in a buttoned-up polo shirt at a grand piano. Just another Stanford undergrad seen thousands of times over in an online admissions video, showcasing an array of talents.

“There’s a different kind of atmosphere here, coming from the South, coming out to California,” says Bryant Johnson as the camera follows his fingers across the keys. “I like being around those with a thirst to learn more, a thirst to ask why.”

Five years later, Johnson, ’17, is still thirsting for knowledge and still asking why. Randomly selected from more than 235,000 alumni to be profiled in this issue, he says he’d love another chance to get his voice heard, to speak out loud as a Black man. If luck is what happens to the prepared, then Johnson has long prepared for just such a random chance.

“In the grand scheme, I know where I come from,” says Johnson, who grew up in Georgia, the descendant of enslaved people “immediately off the ship in Brunswick.” He adds, “In my community, you use your gifts for all Black people—the disenfranchised, the wealthy, the poor. You use your blessings to give back.”

Johnson’s roots were planted in two Southern communities a 30-mile drive apart—one rural, the other urban.

Since graduation, Johnson has worked in digital marketing for Meta (formerly known as Facebook), first in Austin, Texas, then telecommuting from his condominium in Atlanta. In the fall, he’ll move on to new challenges as a graduate student in Boston. He’s a reader and a thinker, but he’s also a performer and an adventurer at heart. He’ll hop on a plane whenever he can just to try out a new place, from Utah to Belize. He studied abroad in Paris for 10 weeks as a junior, thinking French would impress women, he says with a laugh.

In conversation, Johnson veers toward the big picture, what life’s all about. He speaks out against racism and prejudice and about the importance of a sense of community. Maybe he learned that from his father, a superior court judge, and his mother, who conveys a sense of legacy when she talks about attending school with the children of Martin Luther King Jr. Some of it, he’ll tell you, he learned the hard way on the playground.

“He was always interested in his voice being heard,” says his mother, Michelle. “We loved that about him.”

Maybe that began in high school when he started a mock trial team. In those days, he wanted to be a good Christian who followed in his father’s footsteps, speaking out for civil rights and heading to law school when he grew up. He adopted courtroom theatrics from table-pounding scenes in movies like To Kill a Mockingbird and Lincoln Lawyer. “I had to be persuasive, so yeah, I’m pulling out all the stops,” he remembers. “I hate losing.”

Johnson’s roots were planted in two Southern communities a 30-mile drive apart—one rural, the other urban. During the week, he attended primary and secondary school in Covington, same as his dad, Horace, who was one of the first to attend an integrated school there, as a fourth-grader. On the weekends, Johnson and his family drove into Atlanta to connect with his mother’s side. Sundays, he attended the Columbia Drive United Methodist Church, the same church where he worships now. The church pianist taught him Bach and rapped his knuckles with a ruler when he didn’t place his hands just right. 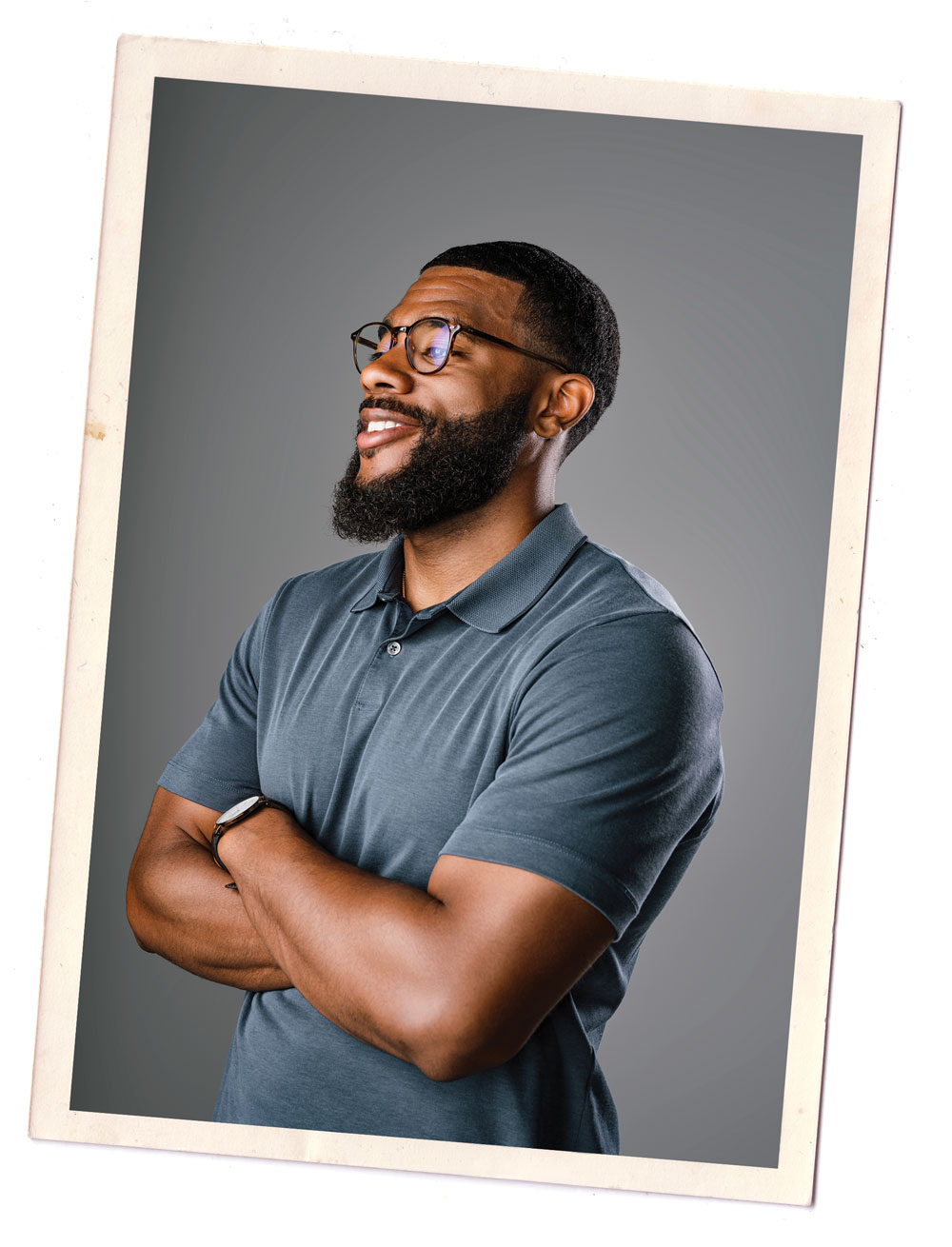 He and his older brother, James, excelled in music, sports and academics. They got bullied a bit for being smart, his mom says. But it was racism that left a mark.

“I got called the N-word in fifth grade,” Johnson says. “A kid threw a ball at my head as I was walking to first base.” That kind of thing sticks with you, he says.

Johnson mulls over those types of experiences, how they shaped him and how best to move forward. Listen to him speak and you can hear this ongoing dialogue: How can laws and regulations be applied so disproportionately for people of color? How can political influence lead unfairly to mass incarceration of Black people, affecting voting rights, home investments and land ownership? How can my own skills and talents help change all that?

The spring of his senior year in high school, he opened an email from Stanford, and it said, “Congratulations.” Well, that was that. He was headed out West. His brother grew up bigger and stronger than him, and played football at the College of William & Mary. But Johnson navigated Stanford’s holistic admissions process without benefit of athletics recruitment. And about that, his dad loved to brag.

People would ask Horace Johnson which sport Bryant was going to play, “like clearly I couldn’t have gotten into Stanford on my own,” Johnson says. “My dad would always be quick to correct people: ‘No, he’s not going for sports. He’s going for academics alone.’ It made him proud.”

At Stanford, he was placed into Ujamaa House, an African American theme dorm with an intellectual focus on the African diaspora. His roommate was from Kenya, and he loved that. Johnson worked as a program coordinator at the Black Community Services Center, played piano for and sang tenor in the Stanford Gospel Choir, and pledged Alpha Phi Alpha.

‘Dr. King, W.E.B. Du Bois, Justice Thurgood Marshall were all Alpha men. My dad was an Alpha man. Most Black men who had an influence on me were Alpha men.’

“It was the first collegiate Black fraternity, founded at Cornell in 1906,” he says. “Dr. King, W.E.B. Du Bois, Justice Thurgood Marshall were all Alpha men. My dad was an Alpha man. Most Black men who had an influence on me were Alpha men.”

By his senior year, Johnson was chapter president of the fraternity and a resident assistant in Meier Hall. He had chosen to major in political science—“I wanted to know how governments work”—and he’d cultivated his sense of fun.

“He came to college in suits, Lord have mercy,” says his best friend from Stanford, Charles Akin-David, ’17, MS ’18. “He was pinkies up, all that stuff. I was from Eastside Atlanta, got Jordans on.” He gave Johnson pointers on streetwear, they hung out at Cardinal football games, and there were plenty of visits to the local Wingstop for food that reminded them of home. “Bryant’s my boy, for sure,” says Akin-David. “He’s cool, he’s calm, he’s kindhearted. He looks out for people.”

In 2020, Johnson moved home to Atlanta to be with his family after his dad died of complications from COVID-19. In “deep sadness,” he says, he turned inward, reading books about society, technology and the economy with such titles as Winners Take All: The Elite Charade of Changing the World and Machine Platform Crowd: Harnessing Our Digital Future. He’d prepared his application for law school but never pushed the ‘send’ button. Instead, he is headed to MIT Sloan School of Management in the fall.

“My north star now is to shape wealth engines, whether it’s investing in businesses or communities,” Johnson says. “It’s not just so I can be rich. In order for marginalized communities to get out of this hamster wheel of inequality, wealth needs to get redistributed. I’m choosing to be a change agent.

“Me being a Christian man, I want to be judged on the number of good works I do,” he says. “My walk to this day is all in the service. To stay prayerful. To keep moving on.”