Brain probes; how to trim food waste; what to read this summer

How happy does chocolate make you? Chemical engineering professor Zhenan Bao may soon be able to tell you with remarkable accuracy. In the June 2 issue of Nature, Bao and her research team detailed the success of their invention, NeuroString, in detecting chemical changes in the brains and guts of mice. When mice with NeuroString implants were fed chocolate syrup, the probes detected the expected spikes in dopamine and serotonin. “The mainstream way people are trying to understand the brain is to read and record electric signals,” says Bao’s former student and the paper’s first author, Jinxing Li. “But chemical signals play just as significant a role in brain communication, and they are also directly related to diseases.” Unlike other probes, this stringlike graphene implant is soft and stretchy so it doesn’t cause damage to the brain or gut. The researchers hope to use it someday for real-time monitoring in humans to aid in the treatment and tracking of depression, Parkinson’s disease and intestinal diseases. “Now that we’ve shown that the probe works,” says co-author and associate professor of biology Xiaoke Chen, “there's a very long list of biological questions we want to tackle.”

Camara Jones, MD ’81, and Jimmy Chen, ’10, are the inaugural recipients of the President’s Award for the Advancement of the Common Good, which honors alumni who have positively and sustainably changed the trajectory of people’s lives in their communities and around the world. Jones is a physician and an epidemiologist whose groundbreaking research and advocacy have focused on naming, measuring and addressing the affects of racism on health. Her efforts catalyzed change at a national level when the CDC and most U.S. states formally declared racism a public health crisis.

Chen is the founder and CEO of Propel, an anti-poverty software company he started to help low-income Americans improve their financial health. More than 5 million people use Propel to manage their government benefits, access coupons and grants, and find employment. Working alongside government agencies to reduce poverty, Chen says justice is a core value guiding his work: “It feels like a moral obligation to take the resources we have and to position them to be valuable to people who are in need.”

You can help save the planet and look good doing it: Try polishing shoes with a banana peel. Dana Gunders, ’00, MS ’02, is a food systems innovator intent on eliminating food waste in the United States. She talked with Stanford magazine about how brave beginners can reduce food waste at home, including ripping off that expiration date and freezing your coffee beans. 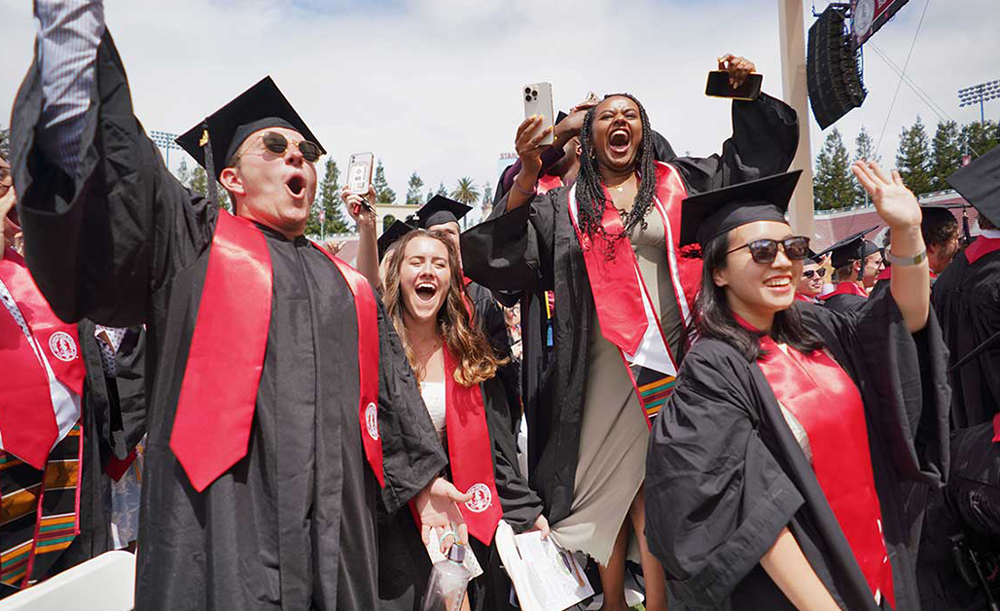 Last weekend, Stanford held Commencement ceremonies for the Class of 2022 and the Class of 2020, whose in-person ceremony was delayed due to pandemic-related restrictions. Netflix co-founder and co-CEO Reed Hastings, MS ’88, spoke to the Class of 2022, reminding graduates of the power of inventions and stories. Approximately 2,600 members of the Class of 2020 returned to the Farm for their ceremony, where France A. Córdova, ’69, an astrophysicist and a former leader of major universities and government agencies, reflected on how her career path pivoted from literature to physics and then to outer space. She encouraged graduates to look out for the unexpected possibilities that emerge in life’s path. “Keep your eyes open for side streets and bike lanes,” Córdova said. “You may end up on an even more incredible journey than you had foreseen if you remain open to possibilities in unlikely places.”

As U.S. government officials contend with disruptions in the global energy market, debates over fracking have reignited. But in the nation’s biggest oil field—the 8,500-square-mile Delaware Basin, in Texas and New Mexico—Stanford researchers have identified a problematic consequence of the technique. Each barrel of oil extracted from the ground brings with it several barrels of salty wastewater that might contain toxic chemicals. To dispose of the wastewater, gas operators inject it back into the ground—usually into subterranean wells just a mile or two deep. Which doesn’t sound too bad until you learn that all that water is triggering earthquakes. Hundreds of them since 2014, in fact. In a study published earlier this year, geophysics professor Bill Ellsworth, ’70, MS ’71, linked the wastewater disposal to small earthquakes, some of which were undetectable before Ellsworth and his fellow researchers used AI to identify them. The research also suggests that continued injections could damage wells that cross the once-stable faults. “Even small amounts of fault slip might pose a hazard to the oil field operations,” Ellsworth said. “It could lead to shearing of wells that could be problematic and expensive.”

Got plans this summer to find Nemo? Make sure you’re wearing the right kind of sunscreen. For years, scientists have known that oxybenzone, an organic compound found in many sunscreens, can damage corals, but the exact mechanisms have remained a mystery until now. In a new study, Stanford researchers found that anemones and corals metabolize oxybenzone in a way that forms damaging radicals when exposed to sunlight. Consumers may be inclined to reach for sunscreens with zinc oxide and titanium dioxide, often marketed as coral-safe, but it’s not yet clear whether metal-based sunscreens are actually safer. “I hope that our research will help the development of sunscreens that are less likely to harm reefs,” said the study’s lead author, PhD candidate Djordje Vuckovic, MS ’18. Until then, lounging on the beach saves (coral) lives.

Zoom meetings are indeed stifling your creativity. Researchers at Stanford and Columbia analyzed groups engaged in creative brainstorming and found that those on Zoom had 20 percent fewer ideas than those in person. Turns out, looking around the room (and noticing stuff, like that box of doughnuts, mmm . . .) gets the juices flowing. Possible solutions include saving more creative tasks for in-person meetings—or simply having the team turn their cameras off. Hey, watching our cats roll around had to be good for something.

Here’s what to read this summer: The adventure story that women’s basketball coach Tara VanDerveer chose for her team to read; the book that sparked Hoover Institution director Condoleezza Rice’s interest in Russia; and 14 others on mental health, work, the environment and more of today’s big issues. They were all recommended by Farm experts and compiled by Stanford magazine.

“I am from Uvalde. I went to Robb Elementary School.” So begins Michelle Vasquez, '88, in a reflective essay in Stanford magazine on how each of us has a role to play in responding to violence, supporting community and managing grief.

In May, the president of Ukraine, Volodymyr Zelenskyy, spoke to the Stanford community in a special video address about his country’s war against Russia for independence, freedom and global democracy.

Stanford women’s golf won its second NCAA championship. A recent documentary showcased a week in the life of the team, which includes the No. 1 and No. 3 amateur golfers in the world. “It’s not always going to be like this,” said coach Anne Walker. “It never was like this until now, and it might never be like this again, so I’m just trying to soak it up.”

More than 100,000 American children attended a school at which a shooting took place in 2018 and 2019 alone. Associate professor of health policy Maya Rossin-Slater studies the long-term mental health, educational and economic consequences those children face.

The David and Lucile Packard Foundation has made a $100 million gift to modernize the obstetric and neonatal facilities at Lucile Packard Children’s Hospital Stanford. The gift will be used to redesign the hospital’s west building, including a new labor and delivery unit, state-of-the-art operating rooms, and 64 private NICU rooms. Two-thirds of expectant mothers at the hospital are experiencing a high-risk pregnancy, and patients come from around the world for care.

Every body is a canvas, at least to Savannah Mohacsi, ’20, who paints internal features of the body right onto the skin of her subjects.