As part of our theme package on randomness and chance, we asked you to tell us your tales of happenstance. Here is a selection of your submissions.

I grabbed a rock hold to pull myself and my giant backpack onto another shelf as I exited the canyon. I had held this exact spot before. I was sure it was this exact rock—one among a trillion or whatever is more than that—in a landscape of sandstone formations laid bare by time, wind and water.

A piece of fabric caught my eye. I plucked it from where it was wedged, likely by a flash flood, and shook the sand off. A pulse of recognition shot up my arm, and I shoved the cloth into my pocket.

There’s nothing welcoming about southeast Utah’s canyon country. With plants adapted to shred skin and clothing, weather bent on desiccation, and insects and animals evolved to find and use the little water and shade available in this vast step-canyon ecosystem, welcome is not part of its vocabulary. And still, a pulse of recognition and comfort. The canyons were holding me at arm’s length, but still holding me. 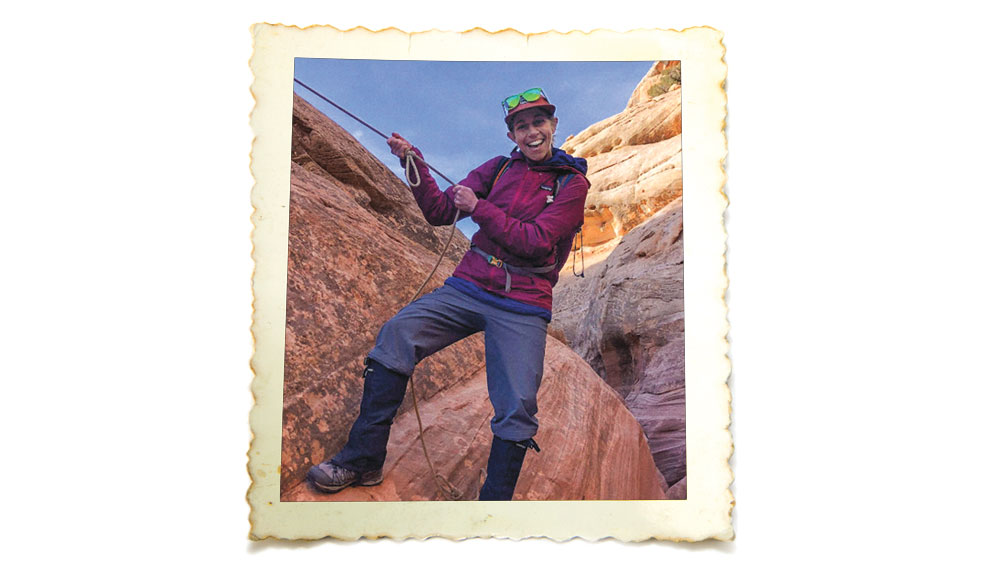 After spending more than 100 nights and days backpacking in this 75-square-mile area, I had earned my stripes as a hiker. I had ridden out sideways snowstorms, sand-scouring winds, flash floods and sunspots. And I’d embraced its pleasures: sunsets, countless stars framed by the canyon walls, an arrowhead connecting humans across time and terrain, a deer silently drinking, and desert potholes—natural basins filled with water right when I needed it most.

One year before, on what was supposed to have been my final trip leading students into the canyons, the teens and I spent a lazy afternoon in some particularly luxurious potholes. The slick rock beach dipped down into a few deep pools fed by springtime snowmelt, the frigid water cascading to the canyon floor below. I dunked myself in one of them, and my white bandana, a gift from a student, slipped off my head and floated right over the edge. It was gone. My heart sank—not just for the loss of the tangible connection to the memories but also for the violation of the “leave no trace” practices to which I adhered, impressing upon my students how fortunate we were to be able to visit these canyons.

Now I was back, two miles down the canyon. Turns out I wasn’t quite ready to give up leading students into wild places. I followed this year’s cohort onto a ledge, where we rested while we purified our drinking water.

I felt the pulse of familiarity again and pulled the dusty cloth out of my pocket. It was a bandana that had once been white. On the border, in teenage scrawl, was the name of my expedition group from the previous year.

The odds had to be less than one in whatever is way more than a trillion.

How to Slip on a Banana Peel and Meet Your Husband


Decades ago, someone littered a banana peel on the sidewalk in front of my Chicago apartment building. I stepped on it and fell. Whoosh. I shrugged it off and went to sleep. In the morning, I hopped out of bed. Ouch. I couldn’t put weight on my foot. The doctor took an X-ray, told me I had broken my fifth metatarsal (the long bone that connects to the small toe) and gave me a big black boot with Velcro straps. 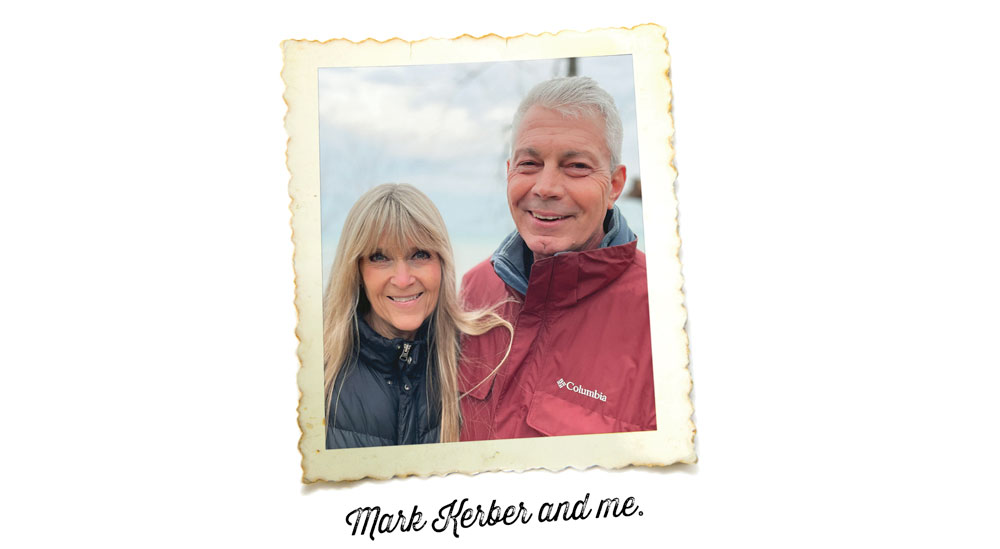 That weekend I wore it, along with my red sweatshirt, to a Stanford football viewing party. I talked with a Class of ’81 guy, whom I’d seen at other Cardinal events, about how it was a shame that I couldn’t run for at least four weeks. On Monday morning, that alum looked up my employer’s phone number and called me. He had heard a radio ad about a free month’s membership at a next-to-my-office health club with exercise bikes. What a nice guy! We started meeting for lunch. Then we graduated to dinner. One night, after he walked me home from a Thai restaurant, we stopped at the fateful location of the peel. “Have you ever thought about being more than just friends?” he asked.

In 1994, we tied the knot—and served cake with banana cream filling. 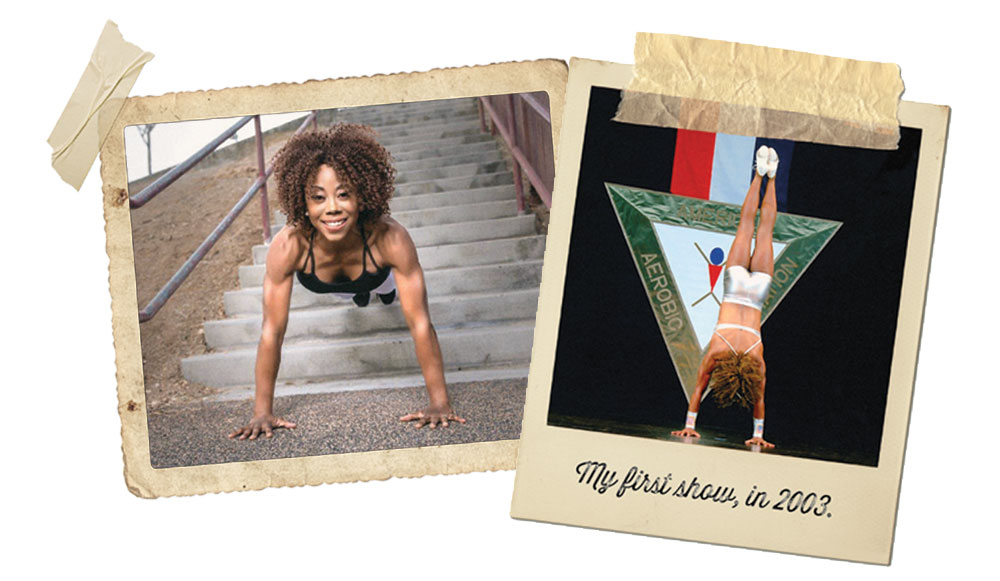 My sister visited Las Vegas on September 13, 2003, to celebrate my twins’ birthday and search for a wedding venue. At our last stop, the Rio, the receptionist informed us that the wedding planner was running late. While waiting, my sister noticed a big marquee that said “Ms. Fitness USA.” Since we had time to kill, we decided to check out the show. We saw young women doing floor routines that resembled gymnastics. Since I had been on the Stanford women’s gymnastics team, my sister immediately challenged me to compete in these fitness shows. Well, 19 years later, I am still competing. I have combined my profession as a physician with my passion for fitness to educate people via books and speaking engagements about physical and mental fitness and nutrition.

My father passed away recently after a long battle with chronic obstructive pulmonary disease. During his final years, I oversaw his health care, so I memorized his Social Security number and other essential information. 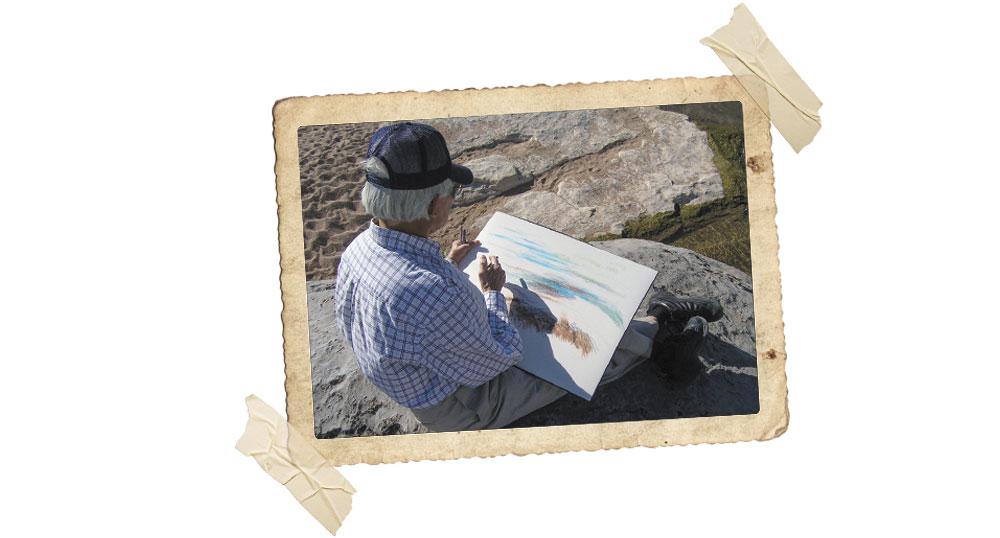 On the first anniversary of his death, I was in Home Depot, buying some materials for a repair, as Dad often did. He was on my mind, of course, and I felt like I was walking through the store in a daze. When I got to the checkout, I used a card that had store credit, and I had to scratch off the little panel to supply the card’s 4-digit PIN. 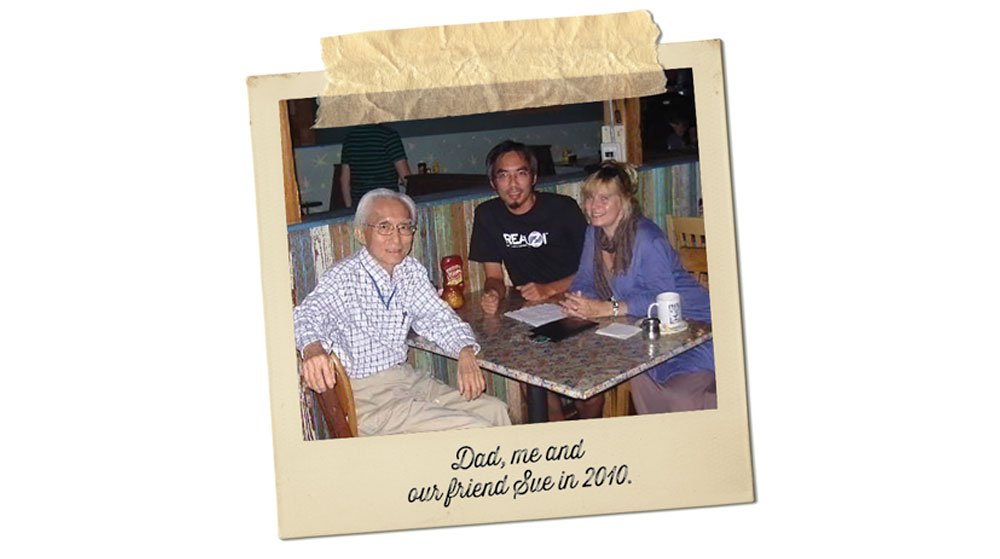 The PIN was the last four digits of Dad’s Social Security number. I immediately got goose bumps all over my body. I wasn’t spooked, though. To me, it felt like Dad was waving to me from the afterlife.

I went to a public high school located in Hyde Park, a leafy old Chicago neighborhood by Lake Michigan. The school had a particular joie de vivre. During the fall, classes were held against the backdrop of rustling leaves that whispered through the classroom windows facing the school’s many courtyards. In winter, the courtyards were a winter wonderland of set pieces, like the Christmas windows at Marshall Field’s department store. The spring, though! In the spring, the smells of melting ice and new growth blew in and crawled through the hallways like a supernatural spirit. For teenagers, that was the scent of rebellion. Kids stopped coming to class. Crushes held all year came into the daring light of prom. Fall friendships were broken and new ones born. It was the season of happy food riots in the cafeteria. Make no mistake: Glasses, knives and heavy ceramic plates were thrown. We all knew it was merely a celebration of next winter being very far away. 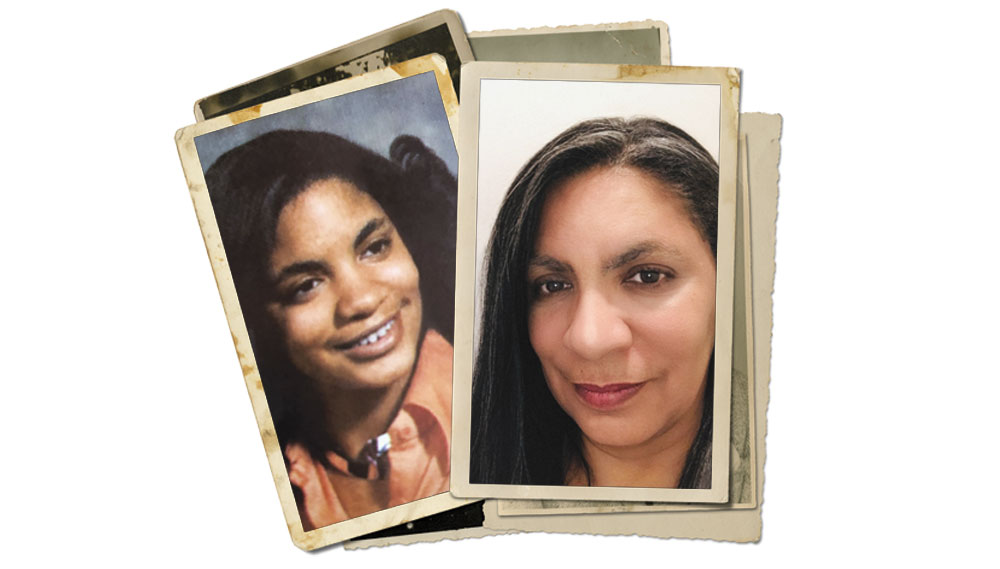 On one of those spring days, I left school “early” to play tennis. Walking to the outdoor court, I thought about my application to a brand-new high school. I loved my current high school. It was hip and pretty. My parents had transferred guardianship of me to my father’s secretary to get me into the school district so I could attend. But the pull of even better college prep classes, a radical approach to student life (think Hogwarts houses), a super-strong arts program and brand-new architecture was strong.

This same spring day was the last day to mail the application. In those days, postmarks mattered; they were the undisputed atomic clock of the U.S. mail. Also in those days, no counselors, parents or community programs were involved in your college applications. Kids took direct responsibility for their education, and I had my next step in my pocket—where any kid would keep the key to their future.

After my tennis match, I checked for the application. Gone with the wind! I searched everywhere on the court and eventually gave up. Resigned to my fate of staying at the fun school, I walked home through the park and then along 51st Street. Blocks and blocks away, with my head hanging low, I spied a dirty, deep orange-yellow piece of paper. It was wet and stuck in the bottom branches of a hedge. Could that be it? It was! I mailed it. I got into the new school (which is now considered to be one of the best in the country), and that set my path to Stanford.

I could have taken any other path home. I could have taken the path I did and walked right past it. Either way—and truly, had I chosen to walk almost any other way!—I’m certain I would have had a different life. To this day, I believe that life is chaotically governed by both fate and that damned unknowable wind, but I always hit “send” at least a day before any deadline.

There She Goes Again

In 1965, as a 4-year-old in kindergarten, I sat on the painted circle on the floor with my classmates at Burnside Elementary School in
Chicago. Next to me was a girl who was also 4. I remember speaking to her and enjoying her company as people at that age enjoy each other’s company. The girl, whose name I did not remember, moved away early in the school year. 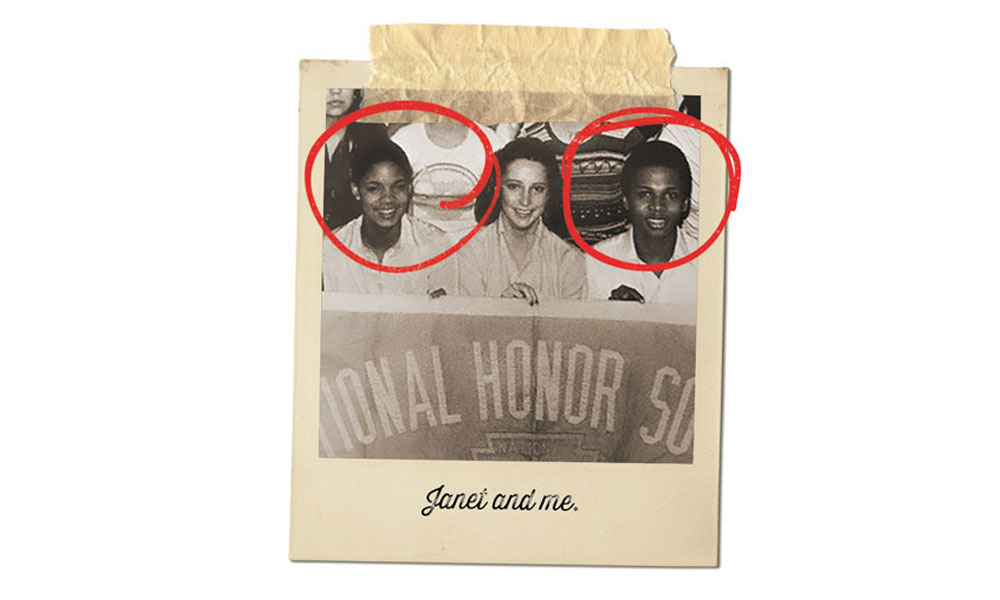 In 1975, I applied and was accepted to a selective public Chicago high school, Whitney Young. A group of us became fast friends, one of whom was a girl named Janet Savage. Over the course of our first year at Whitney Young, we kept telling each other, “I feel as if I know you.”

I mentioned Janet Savage at home, and my mother said, “Savage? Is that the little girl who lived at the corner of our block on 92nd Street?”

The next day, I asked Janet if she had ever lived on 92nd Street, and she said yes, but she’d moved away during kindergarten.

We both attended Stanford. Janet went on to Harvard Law School and I attended Harvard Business School, so we shared a year in Boston. We remain friends today, Janet living on the west side of Los Angeles, me mid-city. Simply by chance.

Books that tackle the topics of our times.

On leaving a big life decision up to chance.

I Am from Uvalde. I Went to Robb Elementary School

And here’s what I think we all need to do right now.