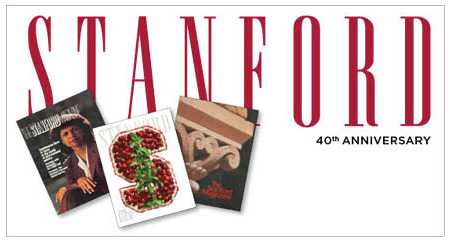 As Stanford turns 40, editors paged back through decades of issues in search of the best covers. Some convey the beauty of campus, some provoke, some mark moments in time. Some do all three. Here are the 21 covers we had to share. Click "view photo album" under main image to see larger covers. 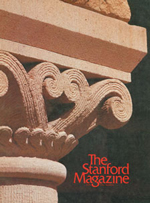 Fall/Winter 1973: The Stanford Magazine was introduced by founding editor Della Van Heyst in 1973, accompanied by a letter from Ralph Davidson, ’50, who served as president of the Alumni Association at a time when the organization was independent from the University. Davidson said the new publication aimed to “feature stimulating articles; glimpses of research; to look over the shoulders of today’s students;” and “capture the enduring spirit and atmosphere of a unique institution.” 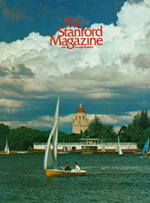 Spring/Summer 1974: In the early days, the magazine’s cover was often simply a beauty shot. We can’t think of a better sight than sailors on a full Lake Lagunita. Behind them is the Boathouse, which would be torn down in 1989. 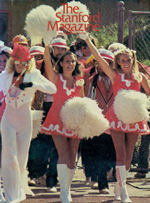 Fall/Winter 1979: “The Incomparable Leland Stanford Junior University Marching Band takes the field at Stanford Stadium on a sunny fall afternoon.” Here again, the photo was the message, without any accompanying story. In wraparound glory—encompassing front and back cover—it celebrated a spirit that’s just as vibrant today, no matter what nostalgia the picture may stir. 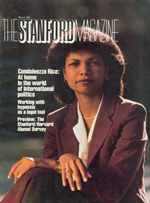 Winter 1985: Condoleezza Rice was a 31-year-old assistant professor of political science when she told us in 1985—20 years before becoming secretary of state—that she hoped to work during a fellowship in Washington, D.C., at the Defense Department with the American Joint Chiefs. Reflecting on her childhood during the civil rights struggle in Alabama, she also said, “We were all reared with a strong sense of responsibility to the community and to those who didn’t make it out.” 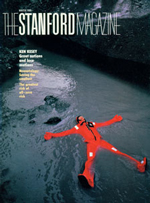 Winter 1988: In this issue, we told the tale of Ken Kesey’s journey from “All-American Boy,” college wrestler in Oregon and Woodrow Wilson Fellow at Stanford to cult hero, LSD advocate and author of One Flew Over the Cuckoo’s Nest. Looking back on his days of traveling across the country in a school bus with his Merry Pranksters cohorts, Kesey proclaimed, “What we hoped was that we could stop the coming end of the world.” 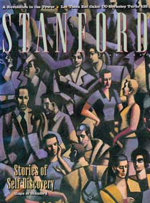 June 1993: Gays have been part of Stanford since its beginning, but in 1993 making them the focus of a cover story was still controversial. Tracing campus homosexuality as far back as 1911, “Gays at Stanford” traveled from the days when being gay meant constant risk of being blackballed, arrested and expelled to a slowly more welcoming future. Some readers praised our “editorial courage.” Others pilloried us for shaming Stanford. 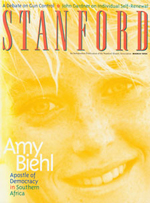 March 1994: “Some people can live a lifetime in 26 years.” So wrote Phil Taylor, MA ’83, delving into the too-short story of Amy Biehl, ’89, killed in Cape Town in 1993 by a group of black South Africans, even while she strove as a Fulbright scholar to further their cause. Family, friends and professors all remembered Biehl as extraordinarily driven in everything she undertook, from diving to dance to social activism. 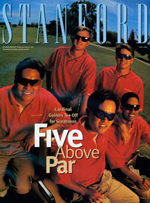 June 1995: This year, the Stanford men’s golf team wasn’t remarkable just for its talent—the season before, the team had won its first NCAA title in 41 years—it stood out for its diversity. In a still largely white sport, Stanford golf was a “veritable five-man Rainbow Coalition,” including a Native American, a son of Japanese immigrants, and a multiracial freshman who was clearly about to shake the golfing world: Tiger Woods, ’98.

September/October 2000: Leg it to the Dish. Check. Rub elbows with a Nobel laureate. Check. Smooch someone at Full Moon on the Quad, catch some zzz’s in Green Library and learn when to jump in “All Right Now.” Check, check and—wait for it—check. A Stanford education just wouldn’t be complete without these and 96 other rites of passage compiled by the editors of Stanford. 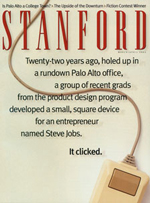 March/April 2002: In 1980, an entrepreneur named Steve Jobs asked a bunch of Stanford product design grads to make a mass-producible, hand-controlled input device for a personal computer he was calling the Macintosh. The mouse created by Dean Hovey, ’78, MS ’85, David Kelley, MS ’78, Jim Sachs, MS ’79, Rickson Sun, ’78, MS ’78, Jim Yurchenco, MFA ’75, and Douglas Dayton, MS ’79, put the product design program on the map, and the world at our fingertips. 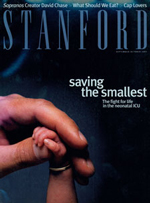 September/October 2002: The neonatal intensive care unit at Lucile Packard Children’s Hospital has been a pioneer in saving premature infants whose chances of survival are grim. We chronicled the story of one of them from the day she arrived at Stanford from Alabama in desperate need of heart surgery, to the aftermath of a rare and successful operation. The bracelet on the wrist of the cover baby is her father’s wedding ring.

September/October 2005: Earth’s changing climate affects so many aspects of life and so many disciplines that grappling with the topic required this cover story and a second installment in the following issue. The assignment took writer Joan O’C. Hamilton, ’83, as far as Montana to track Stanford researchers at home and in the field. Rarely has an article sparked so many heated exchanges, for so long, in letters to the editor. 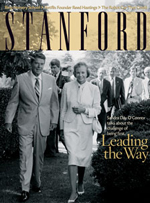 January/February 2006: When Sandra Day O’Connor, ’50, JD ’52, graduated from Stanford Law, her only job offers were as a secretary. By 2006, she was nearing the end of a quarter-century as the nation’s first female Supreme Court justice. O’Connor expressed pride in her historic role and in setting the stage for other women. “It was exciting and wonderful to be the first, but you don’t want to be the last.” 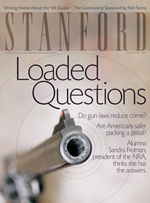 March/April 2006: Sandra Froman, ’71, had never fired a weapon the night she was awakened by a man trying to break into her house. The experience would turn her into a gun owner, hunter, marksman and, ultimately, the polite but steely president of the National Rifle Association. Law-abiding citizens with guns save lives, she told us. Our story prompted a deluge of letters, some lauding our evenhandedness, others decrying us for puffery. 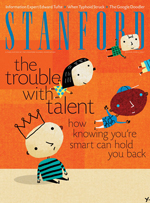 March/April 2007: Psychology professor Carol Dweck’s insights into behavior and motivation have influenced millions. Our story focused on how people who believe innate ability is the key to success hold themselves back, while people who emphasize effort are resilient and often achieve more. Often referred to in blogs and other online outlets, the story is one the magazine’s most read. 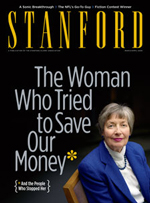 March/April 2009: Brooksley Born, ’61, JD ’64, was head of the Commodity Futures Trading Commission in the 1990s when she pushed for more regulation of the exploding market in credit swaps and derivatives. When the credit markets collapsed in 2007, leading to the worst economic meltdown since the Great Depression, Born looked prescient. She had turned down several media requests before agreeing to be interviewed for our story, which inspired a subsequent PBS documentary. 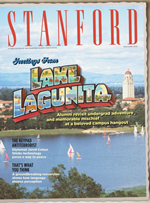 May/June 2010: Though it now remains dry most years, and is never full, for alums, Lake Lagunita’s shores brim with memories of canoe races, bonfires and assorted shenanigans, romances kindled and lifelong friendships formed. When Stanford put the call out to alumni to share their recollections, we were overwhelmed by the volume of responses. The tales featured in the print magazine were just a drop in the bucket, with many more appearing online. 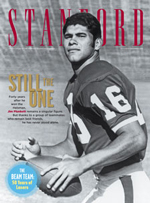 November/December 2010: Jim Plunkett, ’70, was the charismatic quarterback who also led a transformation at Stanford from a run-based offense to a dynamic passing game, culminating in a 1971 Rose Bowl victory. The football program was soaring back to elite status in 2010 when Stanford caught up with him for the 40th anniversary of his Heisman Trophy—the only in Cardinal history. 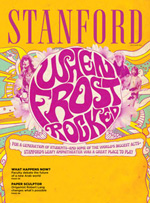 May/June 2011: Our story about Frost’s heyday as a venue for major rock bands revealed an unknown history to recent alums, spurred memories among others and sparked a revival of student-organized concerts at the amphitheater. 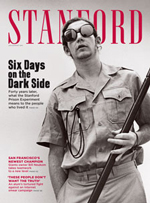 July/August 2011: An ambitious young psychology professor, 24 student volunteers and an infamous experiment that redefined how we think about the nature of evil. Forty years after the events that played out in the basement of Jordan Hall, Stanford spoke to participants in the Prison Experiment—from Philip Zimbardo to volunteers who portrayed guards and prisoners to the woman who sounded the alarm—about how the experience affected them. 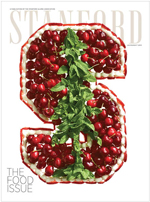 July/August 2013: Stanford alumni are nothing if not diverse, with professions and avocations in every subject imaginable. So for our first true theme issue, we picked a topic we thought absolutely everyone could relate to: Food. From raising cattle sustainably to running a Manhattan restaurant to teaching today’s students how to eat for a lifetime, there was something delicious in this issue for every palate.