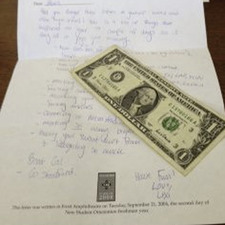 This deep into the Digital Era, getting a handwritten letter is a rare experience for anyone, never mind 27-year-olds whose whole lives have been steeped in high-tech communication.

But what made the recent mailings from Stanford to the Class of 2008 truly exceptional wasn’t the penmanship, it was who penned them: The alums themselves, way back in New Student Orientation, so long ago most had forgotten they’d ever written them.

“Woke up this morning to find a letter I wrote to myself in 2004,” Jennifer Moonyoung Cho,who’s now involved in a start-up in Seoul, South Korea, posted on Facebook. “Craaaaaazaaaaaaaay?!”

“Just received this letter from 18-year-old @DeanWallace,” wrote Dean Wallace, a Congressional staffer in Washington, D.C. “I feel a little anxious about opening it . . . I might let this one sit a while.”

The surprise deliveries were the result of best-laid plans going slightly awry nine years earlier. In 2004, then-Dean of Freshmen Julie Lythcott-Haims, ’89, was looking for new ways to engage arriving students. An assistant mentioned writing a letter to himself during a psychology class. Thus was born a new activity: Write a letter to your future self at graduation, which is when the missives would be returned.

The logistical burdens of the enterprise didn’t fully sink in until administrators found themselves with 1,600 handwritten letters. It wasn’t just a question of where to put this batch—it was the realization that if they made the assignment yearly, they would soon be buried. Perhaps above all, it was the epiphany of how hard it was going to be to return such a volume during the blur of graduation.

In other words, it was pretty much a no-brainer to pull the plug on repeating the exercise, Lythcott-Haims said.

But there remained the matter of returning letters already written. As predicted, the Class of ’08 had other things on its mind when graduation came around. Students were contacted to pick up letters, including at Senior Dinner on the Quad, but hundreds of them remained unclaimed. Eventually, they went back into storage, out of sight, out of mind.

But not totally forgotten. This year, with the class’s five-year reunion looming, the languishing 773 letters were turned over to the Alumni Association, whose staff began tracking down far-flung authors.

Not all of the young alumni cared to hear from their old selves. A few even asked the Alumni Association to shred the sealed envelopes rather than send them on.

But for others, like Alexandra Pintchouk, the letters were as welcome as they were unexpected. On the day she got hers, Pintchouk, a former Stanford gymnast, rode the elevator to her apartment just staring at the envelope, before closing her bedroom and opening it in private.

The results were a mix of light and heavy. Now in her second year at Harvard Business School, Pintchouk is taking a class on developing leadership, one that requires reflecting on life experiences and values to discern one’s future.

In that spirit, she was struck by the eloquence of her young self, who espoused a credo almost tailored for someone in her current position: Considering many paths, trying to separate expectations from callings.

“Do what your heart tells you and have no regrets,” she wrote in 2004. “Whatever happens and whoever you meet, stay true to who you are, be yourself, be ‘Pinch.’”

There were also touches of youth, including a rash of exclamation points and a now-mysterious desire to get through freshman year with only “a few breakdowns,” a wish that makes Pintchouk laugh, wondering what dread she thought lay ahead. And with the levity and wisdom, there was also solemnity.

Only after reading the letter several times did she notice the small “RIP,” on the bottom of the second page, a note in honor of a friend who had died two years earlier. It was the aspect of the letter that most made the past present, collapsing the years. “That brought back a whole wave of emotions,” she says.

For others, the contents were a reminder that teenagers in their first week of college freedom aren’t always the most introspective beings. Brian Inouye opened up his letter to find four sentences, one of them documenting his dislike for discussion groups, written in the scrawl that befits someone who is now a doctor.

“It made me a little upset I didn’t take it more seriously,” he says, laughing. “But then again, how—at the time—could you possibly even think about that?”

But even for him, there were a couple jewels: Seeing the names of two dormmates he’d lost touch with flushed back memories of how close they’d once been, prompting him to reach out on Facebook.

Alexis Smith, who now works in marketing for Facebook, was concerned she might have filled the page with sentimental sap. And so she burst out laughing when a dollar bill fell out of the envelope, apparently an intended graduation present.

Her letter was light-hearted, filled with the kind of small details that bring back big memories: the number of suitcases she brought to campus (three, including the big red one); the rawness of her throat from singing the Larkin cheer (spelled out for posterity) and of meeting her first jocks (not a feature at her small, Catholic high school.) She also included a reminder to thank her parents for helping fold her clothes.

She was a mix of feelings those days, “Feeling confident. Feeling anxious,” she wrote in back-to-back sentences. Reading them nine years later, she was closer to delight.

Far better to receive the letter now, she says, than at graduation when it would have barely registered. Even better with reunion beckoning.

“It’s a treasured time capsule,” she says. The letter is on her refrigerator.

Sam Scott is a senior writer at stanford.