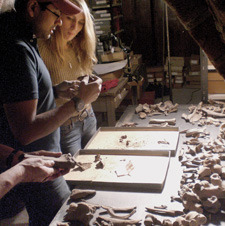 When Knights Were Bold

During the lesser known Baltic Crusades (1200 to 1400 C.E.), the Teutonic Knights, a German order of warrior-monks, vanquished the last of the European pagan tribes throughout modern-day Poland, Lithuania, Latvia and Estonia. In addition to their religious views, the invaders imposed their dietary and lifestyle habits on the indigenous people, causing dramatic changes in the ecology and culture of Northern Europe.

Working as part of an international team, Krish Seetah, an assistant professor of anthropology whose specialty is zooarchaeology, is studying animal bones left behind for clues to how the crusaders' relationship to animals differed from that of native societies. Using a technique called geometric morphometrics to compare bones found in pagan settlements to those found in castles the Germans built, the researchers have shown that the Teutonic Knights rode larger, stronger horses than the indigenous people—a key factor in the knights' success. And by examining cut marks that indicate butchery, they observed the replacement of wild species once hunted by the tribes—aurochs, deer, elk, boar—with cattle and other domesticated animals.

More recently, in collaboration with researchers at the SLAC National Accelerator Laboratory, Seetah and colleagues have employed X-ray fluorescence spectroscopy to analyze the bones' chemical and molecular composition, in order to identify species and trace movements along trade and herding routes.

Seetah's work is part of a larger project led by Aleksander Pluskowski at the University of Reading. The unique endeavor combines traditional archaeology with examination of animal and plant remains, geochemical analysis and archival research to document the environmental impact of conquest and colonization. The team is also constructing a database to integrate the myriad threads, which they hope to link chronologically by the time the project is complete in 2014.