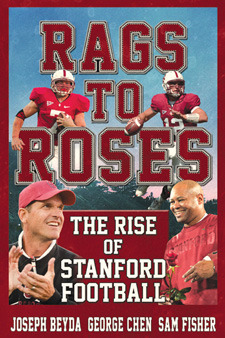 The Stanford football program's revival is recounted in a series of insider recollections published by the Stanford Daily through Kindle. Rags to Roses: The Rise of Stanford Football, by staff writers Joseph Beyda, '15, George Chen, '15, and Sam Fisher, '14, is also scheduled to appear as a paperback in September.

Interviews with 30 current or former players form the core of the reporting, which traces the team from its disastrous 1-11 performance in 2006 to the recent nationally ranked seasons that culminated in this year's Rose Bowl victory. Key passages include the description of the indecision in 2008 about whether to make a switch at quarterback to Andrew Luck, who ended up redshirting that year. All proceeds from the book go to the Daily.