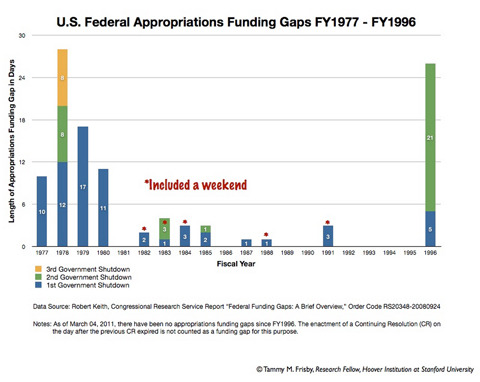 Tammy M. Frisby is a research fellow at the Hoover Institution and teaches political science and public policy at Stanford. She is the author of a widely circulated graph showing the history of U.S. government shutdowns, which were common in the 1970s, but rare since that time. We recently asked her some questions about the current shutdown, the first since the mid-'90s.

When did government shutdowns begin and why was there such a flurry in the 1970s?

In the late 1970s, gaps in funding did not necessarily mean that the federal agencies affected had to close operations, although that was sometimes the case. That changed in 1980, during the Carter administration, when then-Attorney General Benjamin Civiletti issued the first in a set of opinions that interpreted the 1884 Antideficiency Act as requiring government to close functions if federal spending had not been appropriated by law.

One of the most important, if not the most important, differences between the government funding battles and shutdowns of the 1970s, ’80s, and even the 1990s compared to today is that in the earlier period, the shutdowns were partial. Most of the federal agencies had been funded before the start of the fiscal year; Congress and the president were negotiating over a handful or even just a single appropriations bill or funding for a federal department or two. This stands in stark contrast to the new model of the government shutdown, in which Congress has failed to make real progress on federal appropriations before the start of the fiscal year.

Who tends to take the blame or receive the benefit after a shutdown?

Since some of these shutdowns are partial and short-lived, I wouldn’t want to make a general statement about how the American people react—or even if they do. The conventional wisdom about the two fiscal year 1996 shutdowns that people are most likely to remember is that the American people blamed Newt Gingrich and the House Republicans, and that turn in public sentiment against the Republicans contributed to the Republican losses in the 1996 midterm election. Just in the last week, I saw some interesting Gallup survey results taken about four months after the second shutdown that suggested that Americans’ levels of approval for congressional Republicans and Gingrich had returned to their pre-shutdown levels, so maybe it didn’t matter as much.

What is the economic effect?

In fiscal year 1996, the economy was much stronger than it is today, so I would be dubious of any comparisons that use that to make an argument about what might happen this time around. The Committee for a Responsible Federal Budget recently released a chart that displays analysts’ predictions for this shutdown. Assuming a one-week shutdown, most of those estimates show a fourth quarter GDP growth cut of 0.1 or 0.2 percentage points. It’s not good for an economy with the anemic growth we’ve been experiencing. 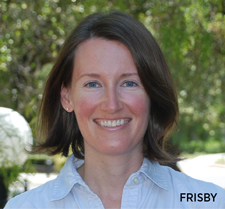 If the negotiations to end the shutdown produced a budget deal that addressed long-term health care spending, revenues and medium-term deficits—what folks often call a “Grand Bargain”—then the economy could be buoyed and any fourth quarter hit could be more than made up for by sustained, long-term economic growth. There’s also the possibility that Washington can’t reach a deal on the debt ceiling. If that happens, the United States and the global economy could have problems that make the shutdown effect look miniscule.

Why is the shutdown back in favor as a political tactic?

The budget and appropriations processes today were not built to withstand the politics of an increasingly partisan and polarized Congress. Nor were they designed to function effectively in the era of the permanent campaign for re-election.

One symptom of the way in which partisanship is driving and impeding the process now is that majority party leaders in the House have taken control of the appropriations process away from the House Appropriations Committee. In the old model, the Appropriations Committee controlled the process and excessive partisanship was frowned upon. Compare that to today, when the chairman of the committee, Rep. Hal Rogers (R-KY), was, generously speaking, a peripheral player in the government funding negotiations and, after the shutdown occurred, heard along with the rest of the Republican members of the House that the GOP leadership planned to bring a few piecemeal continuing resolutions to the House floor for the vote, not involving his committee. That’s a guy who can legitimately ask with some irritation, “Am I always the last to know?”

We need an overhaul of the congressional budget process. Congress still operates with a budget and appropriations process based on reforms made in 1974.

How deeply should the average nonessential government worker care about this? How do you foresee it playing out?

People should really be concerned about the prospects of getting a deal to raise the debt ceiling by October 17, when the Treasury Department says they will have exhausted their extraordinary measures. The potential economic consequences of that are much more serious than the current partial shutdown. Moreover, if we can’t get a deal on that and refund the government in the next couple of weeks, we’ve got a real governance problem on our hands. And I’d be interested to see what that does to confidence in the markets.

What I expect—and in the interest of full disclosure, I’m an unrepentant optimist—is that Congress and the White House will roll a deal on increasing the debt ceiling into the appropriations required to end the shutdown. I would expect that if the right flank of the House Republican Conference keeps his back against the wall, Speaker John Boehner will pass a continuing resolution for government funding (maybe even for the full fiscal year) and lift the debt ceiling with Democratic votes in the House. Right now, he’s bound because he’s observing what’s called the Hastert Rule, named after former Speaker Denny Hastert, that you don’t pass legislation that doesn’t have the support of the majority of the majority party. But it’s not an official House rule; it’s a norm. And if rules are made to be broken, norms definitely are. I found it interesting that, the week before the shutdown, the analysts at Goldman Sachs basically encouraged the scenario I just laid out. At least they said that between a shutdown and a breach of the debt ceiling, the shutdown would do less damage to the economy; so if it took a shutdown to facilitate negotiations on the debt ceiling, they wouldn’t see a shutdown as reason for the markets to be alarmed. Of course, Goldman didn’t provide John Boehner with a strategy to find those votes from Republicans or Democrats.

I’m less certain that we’ll get the big budget deal, or “Grand Bargain,” that people are talking about. But I don’t think that’s out of the question, especially since some congressional Republicans are looking for something they can say they extracted: a policy change that is broadly seen as good to offset the government shutdown.

The Art of Engineering Metal