This October, 56 Stanford undergrad and graduate students will host a movie night two years in the making. They have prepared everything themselves, down to carefully selecting the living room décor and DVD interface for the home entertainment system.

If popcorn is served, it will be made in a microwave that they installed, powered by a solar-driven core that they designed, and placed in a house they built, disassembled, carted 400 miles south, and rebuilt piece by piece.

The perfect movie night is just one of the contests that the Stanford team's start.home will undertake during the 10-day Solar Decathlon competition in Irvine, Calif. Like home entertainment, each of the other categories—architecture, market appeal, engineering, communication, affordability, comfort zone, hot water, appliances and energy balance—will entail its own set of tasks, to be measured quantitatively or judged by a jury of industry professionals. This is the sixth time that the U.S. Department of Energy has hosted the Solar Decathlon, and the first time that Stanford has sent a team to participate.

After about a year of conceptualizing, construction of the start.home began last March on a plot of land between Terman fountain and the Product Realization Lab. The process hasn't been without its setbacks. For one, most of the students at the outset had no construction experience. That roadblock was surmounted through volunteer sessions with Habitat for Humanity, but once the architectural plans had been finalized, project manager Derek Ouyang, '13, had an epiphany. "I realized that we were doing it all wrong," he recounted in a TedX Stanford talk in May.

He had just found out that, following the decathlon, the start.home would end up on the Jasper Ridge Biological Preserve as the dwelling of resident ranger Brooke Fabricant and his family. Visualizing flesh-and-blood people living in the house made Ouyang realize that designing a "smart house" wasn't enough. "We were taking the typical Silicon Valley approach of using hidden technology in the background to make what was happening in the foreground as easy and efficient as possible. But we were missing the point entirely if the people living in these homes remained ignorant of their energy usage." The core of the start.home underwent a redesign, using a built-in interface to create a line of communication through which inhabitants could monitor and improve their personal energy usage in real time.

Having sized up the competition (20 collegiate teams will compete in this year's decathlon), the Stanford group is feeling fairly confident. But it's not really about winning, they claim. Their vision extends beyond October to a future where the "cookie-cutter home" is a distant memory, where affordable and high-tech don't contradict each other, and where smart energy usage becomes not just a habit, but an instinct. 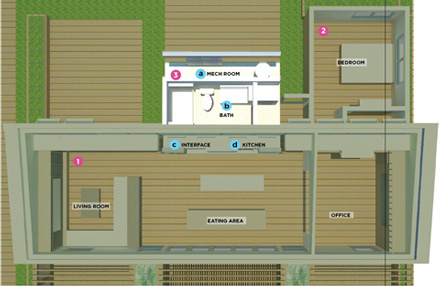 The start.home is comprised of prefabricated, yet customizable, modules: 1) a public space housing the living room, eating area and office; 2) one or more bedrooms; and 3) the core, which contains all the major mechanical, electrical and plumbing systems.

A) The mechanical room keeps the house humming. Among other things, it is where solar energy from a rooftop array is converted into a usable power supply.

B) The bathroom's location adjacent to the mechanical room made good sense from a plumbing standpoint.

C) A touchscreen interface allows homeowners to get much more granular feedback on their resource consumption than a monthly utility bill provides. The goal is to make energy-conscious habits a way of life.

D) The kitchen face of the core extends into the public area of the house and incorporates all the major appliances—refrigerator, range, dishwasher—as well as cabinetry, countertop space, a sink and even a compost bin.

Helen Anderson, '14, is a science, technology & society major with a creative writing minor.