A New Tactic in the Antibacterial Struggle 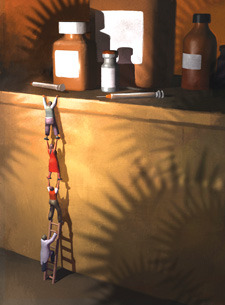 Every problem that preoccupies the Infectious Diseases Society of America is of global import—immunizations and vaccines, HIV/AIDS, tuberculosis and bioterrorism, to name a handful. One, however, is at the top of society president David Relman's list: the harrowing battle against antibiotic-resistant infections.

"Our society has been working on a number of quite different issues, but if you had to list something as the most important, this is it," says Relman, whose year as IDSA president wraps up in October.

The health threat from drug-resistant microbes makes for headlines about "superbugs" and media coverage that raises the specter of unstoppable pandemics. That context, says Relman, a professor of microbiology and immunology and of medicine, is largely the result of failures to address the challenge before it became so daunting.

"This is a significant, serious, persistent problem that is not going away," says Relman, who also is co-director of Stanford's Center for International Security and Cooperation. "And in part the dire words that you hear today are born out of the frustration that there has been woefully insufficient attention way back in time, at points when perhaps something real could have been done in a timely fashion."

But one controversial IDSA proposal for a way to deliver drugs faster to the sickest patients has gained attention. Although combating antimicrobial resistance requires a multifront strategy, the proposed IDSA process, called the Limited Population Antibacterial Drug approval pathway, would allow new drugs to be tested faster in smaller-than-usual and less expensive clinical trials. The medicine could then be federally approved for limited use with patients whose condition justified the lower level of statistical certainty about treatment safety that follows from narrower trials.

Relman and Amanda Jezek, the IDSA's vice president for public policy and government relations, say the proposal has gained traction in both houses of Congress and that it's being incorporated in legislation now being drafted. A New York Times story in June noted that opposition already exists because of apprehension over any reduction in the scale of drug testing.

"Yes," says Relman, "there is something real to the concern that you're going to be talking about trials that involve smaller numbers of people, for which there will now be results with bigger error bars. . . . However, the reality is that we'd have to wait years to have the kinds of numbers that would generate smaller error bars, during which time thousands of people will die unnecessarily."